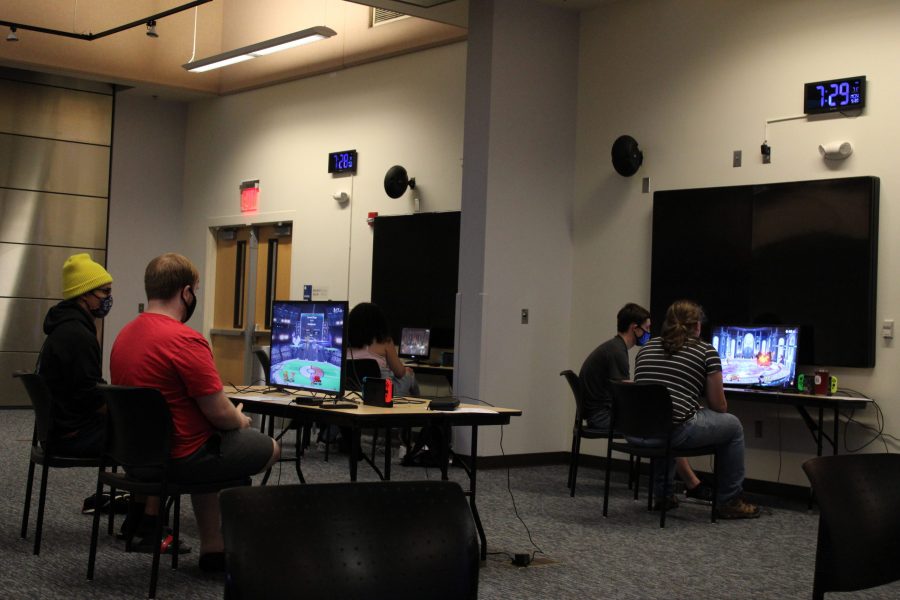 Members of the “Super Smash Bros.” club at UNC Asheville return to in-person events with optimism, but remain cautious for its future.
One of the club’s founders, Brennen Shaughnessy, wrote the constitution for the club three years ago when an idea came from him and his friends. The club became instantly popular.
“The first meeting we ever had, there were 20 people, which was insane,” the 22-year-old said.
While the club bears the name of “Super Smash Bros.,” Shaughnessy said the club embraces other types of fighting games as well.
“We’ve pretty consistently had at least one traditional fighter for a while,” he said.
Samuel Rhinehart, the current president, joined the club during its beginning. He said the founders created the club because of their passion for the game and to differ from other local “Super Smash Bros.” communities within Asheville.
“They weren’t really fans of the Asheville competitive scene, so they wanted to make their own,” he said.
“Super Smash Bros.” Club Scribe Tyler Records, said he first joined during his freshman year when the pandemic prevented in-person meetings from taking place. The club relied on online events.
“It was at the height of COVID so they were doing online tournaments every week. I enjoyed those so when we started coming back in person, I got to meet a lot of the people here. It’s a really nice community,” Records said.
Due to the pandemic causing an initial decrease in the number of students attending, the club collaborated with other schools such as Western Carolina University to play Smash Bros. with.
“They’ve been coming and playing us every now and then, and that’s been a lot of fun,” Rhinehart said.
The collaboration with other schools allowed for larger events which connected students with other communities across the region.
“I think we had 80people in our big event last weekend, about half of those from other colleges at a competitive event with a $500 prize pool,” he said.
During the height of COVID-19, Shaughnessy said the club struggled.
“COVID made the club die for a little while. It wasn’t completely dead, we moved online, but Smash Ultimate doesn’t really have a great online setup,” Shaughnessy said.
However, now with club meetings becoming in-person, Shaughnessy said the number of students attending increased significantly.
“For a while, we only had about four or five people weekly, me not included,” he said.
Shaughnessy recognizes there is a slight risk of the virus spreading due to the equipment being shared by members of the club.
“There’s a lot of safety concerns, but we’re trying to be safe and do everything we can,” Shaghnessy said.
Rhinehart said he keeps a close eye on the COVID-19 cases on campus to make sure the club can remain in-person and makes sure safety precautions are taken in order to operate in a safe and clean environment.
“We were super careful when we came back. We spaced everything, there were hand sanitizer and wipes everywhere,” he said. “If it gets too bad, we’re of course going to go back online, which is going to suck, but it’s not really a choice we get to make. It’s people’s safety first.”
Shaughnessy noted the pandemic is not over yet and said he hopes the club can still stay together with in-person events while also keeping students safe.
“I’m not currently one of the officers so it’s really not my decision, but I hope we can stay in person, but I also want to stay safe,” the senior said.
Shaughnessy said the club’s return brought him a lot of excitement, but remains concerned about the continuing COVID-19 pandemic.
“If COVID starts getting back, I know I won’t be coming here every week,” Shaughnessy said.
Rhinehart said COVID-19 along with classes adds a lot of pressure to student’s daily lives and playing the games help students release the stress they accumulate.
“It’s just a fun environment,” he said. “It’s completely free for everyone, so we invite people to come in and just hang out.”
Rhinehart said some members of the club bring their own equipment and games to share due to the club’s growing popularity.
“I would love to see more students. We would love to see people bring their stuff as well,” he said.
The club serves as an outlet for students to distract themselves from life and offers a space for community.
“It is definitely something I look forward to every week and I think a lot of people are on the same boat,” Records said.
The club welcomes all but Records also encourages competitiveness to make the club more fun and improve the skills of the players.
“It’s a place where people can get better at the game,” he said.
According to Shaughnessy, the strongest aspect of the club is the stress-free atmosphere and the welcoming community which gives students the opportunity to get better at the game in a judgement-free environment.
“If you come here and play often, you will get better,” he said