Witchcraft in the Appalachia 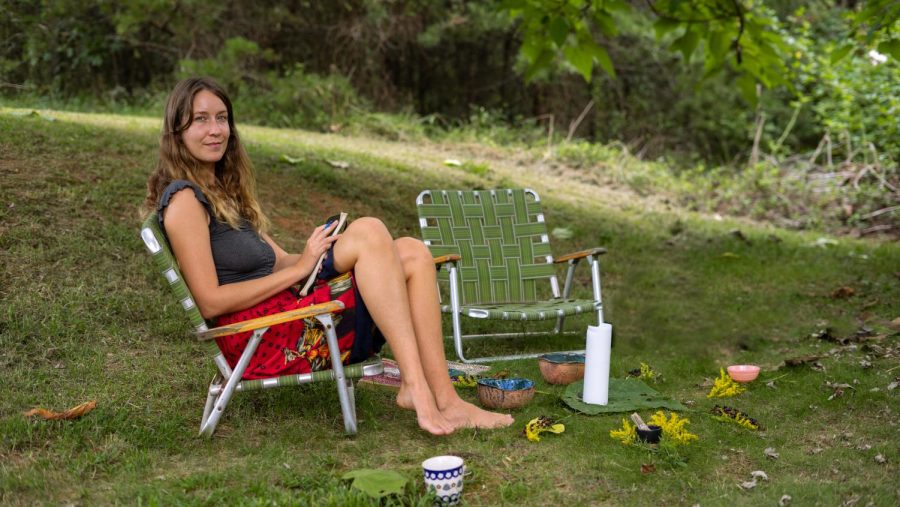 Practicing Witch Presley Randall shares what Witchcraft means to her.

The mountains called and the witches came running. The oldest mountain range in the United States, the Appalachian Mountains, encompasses the town of Asheville and acts as a home for many Wiccans and witches.
The dark history of witchcraft often resulted in witches being burned, hung and hunted. Feared by society and not able to advocate their powers and remedies, many witches went into hiding and kept their practices quiet.
Today, without the fear of being killed for practicing witchcraft, the community has grown astronomically. Queen Lady Passion (Dixie Lee Deerman), a practicing witch in Asheville, founded Coven Oldenwilde in 1994. She was born a psychic and thought that being able to read minds was a talent everyone possessed.
Passion soon realized the ability to read minds was not something everyone could do as she tried to show her mother her abilities. On a beautiful afternoon, Passion and her mother stood in the square of a small Texas town and Passion was ready to prove to her mom her skills.
“I just started scanning everybody and telling what crimes they were guilty of, using words I had never heard of,” she said.
The light in Passion’s eyes faded as her mother showed great disapproval and fear of her daughter’s gifts. Despite the growing disapproval from her mother, Passion continued to practice magic.
“I could’ve shut down but I didn’t. I chose not to because they wanted me to and I figured something so organic in me wasn’t something I was willing to lose,” she said.
Passion, like many practicing witches, is often faced with the ultimatum of continuing the practice despite backlash from society or practicing privately behind closed doors. Many witches find refuge in their practice, just as many Christians do with their faith.
“My craft is my solace and drive, it propelled me through medical school and single parenthood,” Passion said. “I did a spell to ask the gods where I needed to go, I didn’t know why I just needed to go. I did the spell and the words that came back to me were ‘Asheville.’”
Witches can be found in every town and city all across the United States. Some may be more public than others, but what is it about Asheville that calls Wiccans and witches to this old mountain town?
“I felt that there had been witchcraft here for a long time–old mountain magic. If it remained or if it didn’t, I was going to resurrect it. Really what it is, is old witchcraft, old herb craft, and moon lore, old ‘do it because it works,’ and you can feel that,” she said.
Presley Randall, a practicing witch in Asheville, credits the large community of witches to Asheville’s reputation.
“Once places develop a reputation for being a mecca, people want to make that pilgrimage to be here,” she said.
Randall recently moved to Asheville after visiting for the past 10 years on vacation. She said she loves the community here and hopes to hold women’s retreats at her newly purchased property. Randall’s attraction to the practice of witchcraft happened after feeling a disconnect with the Christian beliefs she learned during her childhood.
“I was raised Christian and I never connected with this male God in the sky that punishes you and that views women as inferior, and I wanted to connect with something that was outside of myself or come to find out within myself,” she said.
Randall attended a women’s retreat a few years ago and said she found something she could finally identify with.
“I didn’t have a name for what I believed in until I went to a women’s retreat that talked about ‘the great mother’ and I was like, yeah, that sounds more like what I have been feeling,” she said.
Randall values feminine energy and the power that energy holds and found inspiration in reading the history of witchcraft.
“I didn’t feel very passionate about witchcraft, and it felt very performative and ritualistic. It wasn’t until I read into the history of witchcraft and the goddess religions and I was like ‘holy shit,’ I am reading about my past lives and ancestors,” she said.
Randall pulls out the lover tarot card, a tool many witches use to gain insight about the future or issues at hand and said the card holds great understanding and symbolism.
“The lover’s tarot card represents our job here on earth. The man is looking at the woman, and the woman is looking to the god. I truly believe that women are the bridge between earth and the divine. We are the lifeline of humanity by giving birth, so I think it is so fitting for us being connected to the divine,” she said.
Witchcraft is open to practice for anyone. You do not have to be born with psychic abilities to be a witch.
“I do believe everyone is born with certain talents or potential for talents, but they stifle themselves to conform to society. They soak in and nurture crazy beliefs and ‘-isms,’ like racism, sexism, etc. and I believe they do themselves a disservice when they do that,” Passion said.
Off of bustling Merrimon Avenue lies Raven and Crone, a shop that sells herbs, incense and many other supplies a practicing witch might need. The shop owner, Lisa Anderson, was born in Asheville and later returned here to raise a family.
Anderson said she was raised in a Christian home but never felt a connection to that belief system. This discontentment made her curious about different religious and spiritual practices.
“A friend gave me a copy of Drawing Down the Moon and I became interested in neopaganism and nature-based religions. As a woman I was particularly drawn to the idea of a Goddess and a belief system that perceived women in a powerful and respectful way,” she said.
Anderson said Asheville’s liberal orientation and tolerance for many different religious beliefs makes it a comfortable place for the witches.

Anderson knew women who were Christians that were very connected to the Christain church that may have practiced healing techniques that could now be considered witchcraft.
“I knew women who were healers and used the laying on of hands and recitation of biblical verses to heal sickness in people and animals, to bring good luck or to rid you of ‘bad’ influences,” Anderson said.