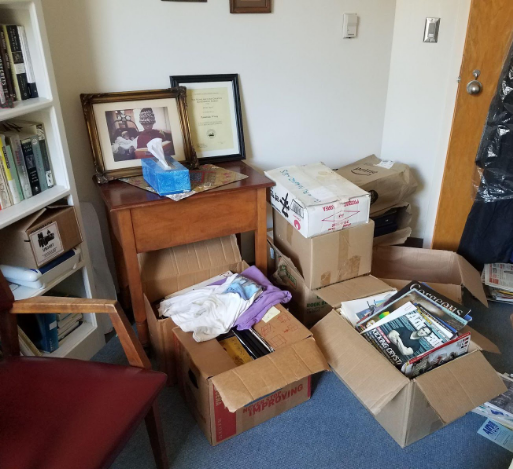 Photo by Makayla Towns Boxes of queer magazines and news clippings saved from interviewees of the Oral History Project.

Makayla Towns
Contributor
[email protected]
The LGBTQ Oral History Project lives in the corner of Associate Professor of English Amanda Wray’s office. Worn boxes sit on top of each other filled to the brim with magazines, articles and news clippings throughout history, some in newer mint condition and others yellow with age or folded with use. This unexplored archive of LGBTQ material from actual members of the community sit snug with her plaques, educational books and photos of her two children.


“A lot of the people that we interview are older and they have all these things and they’re like, ‘We don’t know what to do with them,’ and they might maybe not have any children or don’t have anyone to pass them on to and they say, ‘Do you want these?’ and we say, ‘Hell yeah, we want these,’” said Drew Scott, a sophomore at UNCA and Wray’s current intern.
Scott, who processes the physical archives, opens all of the boxes and shows different magazines, newspaper clippings, photo albums, scrapbooks and pamphlets. Pieces of paper range from the early 70s to the present day and come from different regions in America. He said he wishes they had more space to work.
“If we get more I don’t know where it’s going to go,” Scott chuckles. “Poor Dr. Wray. She doesn’t have an office to speak of.”
Only half of the archives live in her office. The rest can be found through Blue Ridge Pride and UNCA’s website and library.
The Oral History Project became Wray’s passion, and her current research project started in 2019. The project captures LGBTQ voices and stories and archives them so others can hear from their perspectives. Wray was heavily inspired by Indigenous methods of storytelling and said storytelling is a great way to pass on wisdom. The interviewees range in age, gender, sexuality and race, but they all have one thing in common: they’re part of  the LGBTQ community.
“That’s kind of our catchphrase, right? Our stories, our lives, our way. I feel that way, there is no better way to learn from somebody but in their own words. We aren’t writing history books. We’re letting them write and narrate their own history. It’s beautiful. It’s powerful,” Wray said.

Wray said the project does not have the support it needs. Her main support system comes from Blue Ridge Pride. From the beginning, they provided interviewees and financial support. Although she said she’s happy to have Blue Ridge Pride’s support, she is disappointed with the university. Wray said she received her first grant from the university to pay for interns next semester.
“UNCA has not done much to support me. You’re on campus, how much have you heard about this?” she said. “That’s why I’m intentional with saying that this is a collaboration with me and Blue Ridge Pride, not UNCA, because I’m at a place where I’m really tired of UNCA getting credit for things that they’re not actually supporting. I’m tired of the performativity,” Wray said.
Wray was born in rural Kentucky and attended the University of Kentucky for her B.A. and M.A. in English literature. In 2007, she moved to Arizona where she did her dissertation on oral histories and worked at Arizona’s queer archive.
She said her area of research is in anti-oppressive rhetoric and how to prevent long-term social impacts for better inclusion of marginalized groups. In 2011, she moved to Asheville and said she was surprised Asheville did not have an LGBTQ archive.
“When I moved here, it was really surprising to me that our university didn’t have an LGBTQ archive already,” she said. “I just got really surprised we didn’t have more representation in our special collections of LGBT voices given that Buncombe County has more same-sex couples than any other county in North Carolina. I just don’t understand how that happened.”
Wray wanted to create this archive because it was important. She said it needed to be done. She explains the importance of connecting different voices together, especially queer youths to their elders. Before she could begin the project, she waited until tenure in order to get started.
In January 2019, she began her project with three interns, one of them being Corey Childers, a UNCA alum. Childers said the archives were very new and Wray’s goal at the time was to figure out how to work this archive. They said Wray helped them prepare by hosting a workshop.
Along with managing interviews, digitizing, copy editing, uploading, transcribing and putting them on the web, Wray also taught interns how to give interviews and what to do during them.

“I don’t want to say I’m doing this alone because I have a lot of supportive volunteers, but I am the only project leader, so I have a lot on my plate in terms of just managing privacy, confidentiality and training everyone and then getting the interviews up,” Wray said.
The interns said Wray did an excellent job of explaining what they should be doing as interns. Childers admitted they were nervous once their first interview came.
Childers began the series of interviews with Michael Harney. They remembered their first interview vividly. Harvey, a prevention educator at Western North Carolina AIDS Project, helped co-found WNCAP, a non-profit in the Western North Carolina area that helps with HIV/AIDS prevention.
“They were like, ‘It’s great you have the first interview we’re going to do,’ I was like, ‘Great, the pressure’s on,’ but it was fun. It was really fun,” they said.
Childers said they enjoyed working on the project. Learning more about LGBTQ history in the South was their reason for joining because of a misconception that queer people only live toward the West Coast, but they’re everywhere. They said they were especially interested in the history of Black queer people and how they shaped southern culture and identity.
“There is a lot of simplification of what goes on in the South and it’s just racists and hillbillies, which is totally true. It’s a huge thing and it’s a huge issue, but as a queer person who was born and raised in the South, I know there are a lot of different types of people here. The history of Black Americans and LGBTQ Black Americans and the ways that they have formed the culture of the South is a huge thing, and it’s a beautiful thing,” Childers said.
Scott said he joined the archives after seeing a flyer and became interested immediately. He said he enjoys organizing the physical archives because he gets to read and learn a lot. His favorite piece was “Alive and Kicking: A Positive Newsletter-About Positive People.”
“It’s just positive and I really liked reading about it. This was a little farther in the future, so things were looking up and it’s nice to remember,” Scott said as he searched deeper in the boxes.
As of now, the plan is to diversify their archive and get the word out that the Oral History Project does exist and students can interact and support the project.
Childers said when they were an intern, the biggest priority was diversity.
“We’re working on trying to diversify this but in a way that doesn’t feel like we’re taking and not giving back. Because my whole thing was you don’t want to go and ask someone for their story and get all this information and just be like, ‘Oh, thanks. We’re taking this away. Bye,’ and they’ve just given you all this time and emotional labor and all that just to be in our project. It had to feel more like a community need and something that we needed to have,” Childers said.
Wray took this into account and shared their current statistics on their interviews and what her future goals are in regards to expanding diversity. As of Oct. 22, they had collected 83 oral histories. 60% are white, 12% are Latinx, 9% are Black and 6% are Indigenous. She said some people didn’t clarify their race or talk about it in their interviews, so there are some unidentified people in the mix as well. Wray said one-third of those interviews come from trans or nonbinary people, another third from gay-identifying people and another third from lesbians. Wray said she wants to continue to diversify the archives.
“We launched our Language Heritage Speakers Initiative with Spanish-speaking individuals. We started that during COVID-19 in 2021. We were able to get LGBTQ youth who speak Spanish as a home language, or they have parents who speak Spanish and they’ve taken Spanish in college. They are interviewing LGBTQ elders in Spanish,” Wray said.

As for spreading the word, Wray searches for interns to help next spring in conducting interviews and helping out with the archives.
“I would like to see more people help out Wray,” Scott said as he looked around the archives, which now had piles of books and papers all over the floor.
Despite the lack of support from the university and keeping up with an archive while being a single mother with two kids and a professor who teaches 60 students a semester, Wray said she stays optimistic about the project and continues to work hard on getting the word out to the Asheville community.
“With the project, we’ve been able to take people who said in an interview that they felt ‘really lonely’ and we had them interview LGBTQ youth and they created these relationships and they connected on social media. We enlarged their social group,” said Wray, “They’re becoming family with one another and that is some really beautiful outcome of oral history work. It’s all about building relationships with someone,” Wray said.