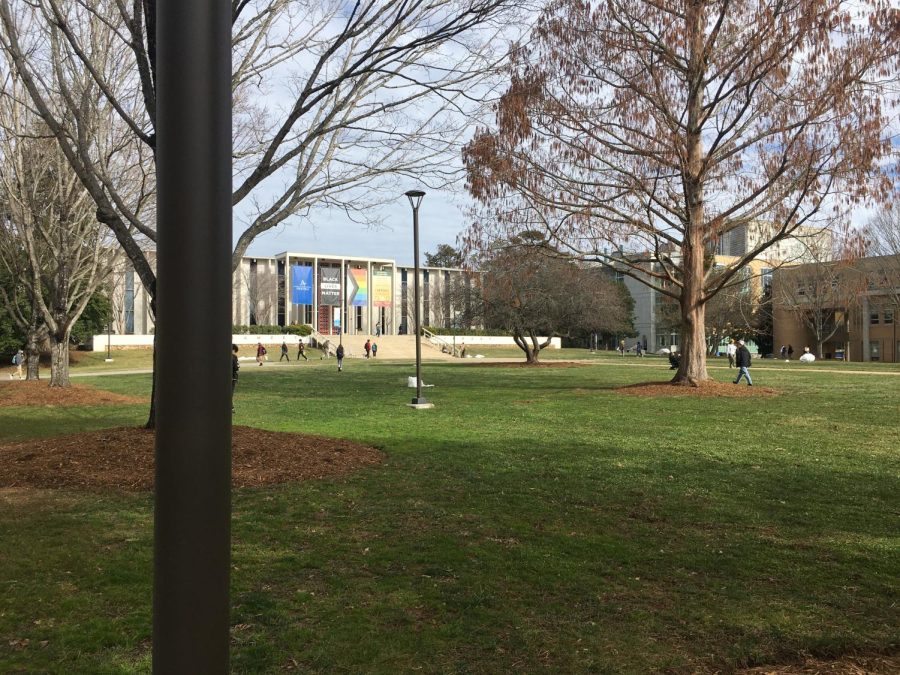 Students make the most of a sunny day on campus as they move from one class to another.

With the shift from remote learning to physically attending classes, many students return to campus revitalized after a well-earned holiday break.

“It’s a relief to be back. I learn so much better in person but I also know that the COVID situation can change pretty rapidly and force us back online. It feels like waiting for the other shoe to drop sometimes,” said Samantha Decker, a UNC Asheville senior.

If UNCA did reimplement remote learning, Decker said she wouldn’t mind if it meant keeping everyone as safe as possible.

“I struggled a lot with the initial switch to online courses because I couldn’t see my friends or professors or even do my work in a place where I could focus. I also recognize the increased likelihood of spreading COVID around campus,” she said.

Professor of Academic Sciences Christopher Godfrey said he built the required infrastructure to conduct all his classes online and would prefer if it remained so given the current state of the pandemic.

“All of my lecture material is the same as what I would present in a classroom setting, and I’m offering all of my classes synchronously via Zoom so that it is as close to a classroom experience as possible. We watch lecture videos from my shared screen and we can discuss any topic as necessary, look at current data or review additional information. It works quite well,” he said.

Godfrey supported the university’s policy for online-only courses during the first week back to school, but doesn’t believe it was long enough.

“In two weeks, one of which was online, the campus has nearly surpassed the total number of confirmed COVID-19 cases that we had in the first six months of 2021,” he said.

Decker also voiced her support for extending remote learning from one week to two, especially after university officials notified students that they needed a negative COVID test to return to campus so close to the start of the semester.

“Tests and appointments were extremely hard to come by before classes started. I think it would have saved everyone a lot of headaches in the long run and would have provided more of a buffer between the end of break and students coming back to campus with potential positive cases,” she said.

According to UNCA COVID-19 reporting statistics, the cumulative number of positive cases among students and employees went up 84%, from 39 cases to 72 cases, as of Jan. 1., although not all cases are currently active.

Godfrey said he’s the parent of a toddler too young to receive a vaccine and would prefer the option to conduct his courses online, leaving them that way until he feels it is safe to return to a classroom.

“I already have four students in my classes who have tested positive, are not feeling well or have reported being exposed. The university has given us the option of offering hybrid courses for up to a quarter of the classes,” he said.

Last semester, the professor said he collected surveys from his students that revealed a majority wished to remain online and sentiments this semester appear no different.

“Given that I have received no pushback about being online so far in my in-person courses, I expect that most of my students are perfectly happy to be online,” he said.

Lecturer of Languages and Literatures John Crutchfield shared Godfrey’s sentiments about the week of online classes being longer, but said he prefers to instruct his students in person.

“I think two weeks would have been more prudent, just because the national infection rate was still rising at the time the semester started. But I much prefer teaching in person and am glad to be back, although I chafe, no pun intended, at having to wear the mask,” he said.

The German lecturer said wearing a mask while attempting to teach a foreign language proves challenging and considers it a handicap for students trying to learn.

“It’s considerably harder to conduct a class when it’s online. This has to do not just with my personal teaching style, which is rooted in performative approaches, but also with what I actually believe teaching and learning to be. Online learning might as well be called disembodied learning, for that is exactly what it is and is intended to be, a way of taking the body out of the equation,” he said.

Despite the connectivity platforms like Zoom allows users to harness, Crutchfield said it’s extremely difficult to recreate the feeling of community between teachers and students.

“it is impossible to do something as simple as look the other participants in the eye because the image one is seeing is in fact, compared to face-to-face interaction, a radically truncated experience. The quality of the interaction is significantly less nuanced and thus more vulnerable to misunderstanding,” the lecturer said.

Although he fears the omicron variant might force the campus to revert back to online courses, Crutchfield said he remains hopeful the wave will pass by February.

“The reversion would affect me more if the public schools were to go remote. Then both of my children are at home, which means my wife can’t work, and that adds a significant economic hardship on my family. So let’s hope it doesn’t come to that,” he said.