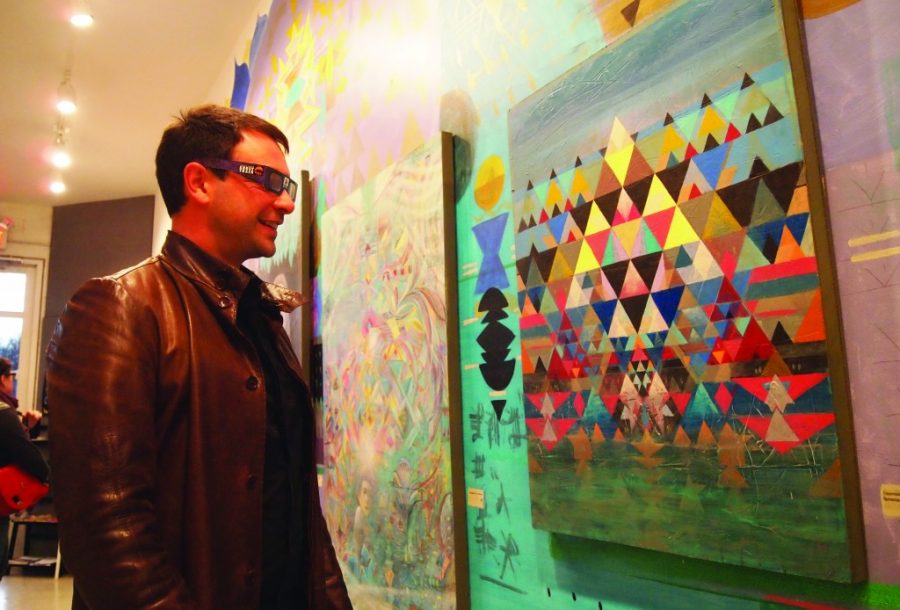 
The Artery, an art gallery in the River Arts District of Asheville, will feature a live mural installation titled “My Name is a Verb,” through March 2.
Joshua Spiceland, the sole artist of the “My Name is a Verb” exhibit, said the final result of his exhibit more than satisfied him.
“I love it,” Spiceland said.
He explained the show consists of 10 large canvases and about 20 smaller pieces.
“Together, they punctuate a full emersion of mural space,” Spiceland. “They’re basically floor to ceiling and mostly all executed with acrylic. I started on Tuesday, so I had Tuesday, Wednesday and Thursday to finish with the installation. I finished last night, had it all done by today and here we are.”
“Many of the pieces are inspired by art history,” Spiceland said. “A lot was also based off of abstract art as well.”
He said he tried to blend abstract with the figurative work to show everyone he can do both.
“Its something I’ve always wanted to do, the mural installation,” he said. “My friend was actually the one who suggested I do the wall stuff. When I decided to do it, I just took it and ran as far as I could.”
Spiceland said he likes how the mural worked really well with specific pieces. “The way the figures kind of come off the page onto the mural is pretty neat, and it was really fun to make,” Spiceland said.
Willard Watson, a local art admirer, said he found out about the show through a friend. Watson said he did not have any idea of what this show would be like, but decided to give it a shot.
“I like the artwork a lot,” Watson said. “I was thinking about how long it must have taken him to do all of the mural effects. He definitely put a lot of time and effort into this. Even if the mural wasn’t behind it, the way he blends the abstract element with geometric patterns is amazing. His use of color is just as incredible. He is able to really make a landscape with all his artwork.”
As an added feature, Spiceland gave out 3- D glasses that, when worn, reacted with the pastel colors and drawings on the mural and paintings. Watson said these 3-D glasses are not something to pass up.
“There is an added component with the 3-D glasses,” Watson said. “You get your first impression of everything, and then with the glasses you get to go back and see it all again in a different way. The one that popped out to me is the bearded gentleman. There is just something about the way he is able to blend the oils together. I really like it a lot.”
Watson recommends this show, and said it definitely demonstrates the talent of local artists. 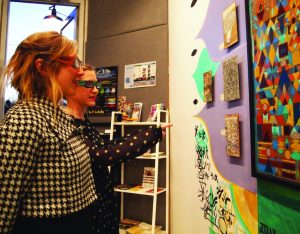 David Acord, a local patron of the Asheville Area Arts Council, said this show really surprised him. Interested in art, Acord said he got more than he expected at this show.
“I was amazed when I walked in the door,” Acord said. “I’ve never seen anything like it. His uses of patterns are amazing. The colors are vibrant and all just kind of blend into each other.”
“Its interesting how he blended the mural into his individual pieces too,” Acord said. “It really looks cool and gives a new dimension to the artwork. You really have to check it out with the glasses. It gives it a totally different aspect. It’s something I haven’t really seen before.”