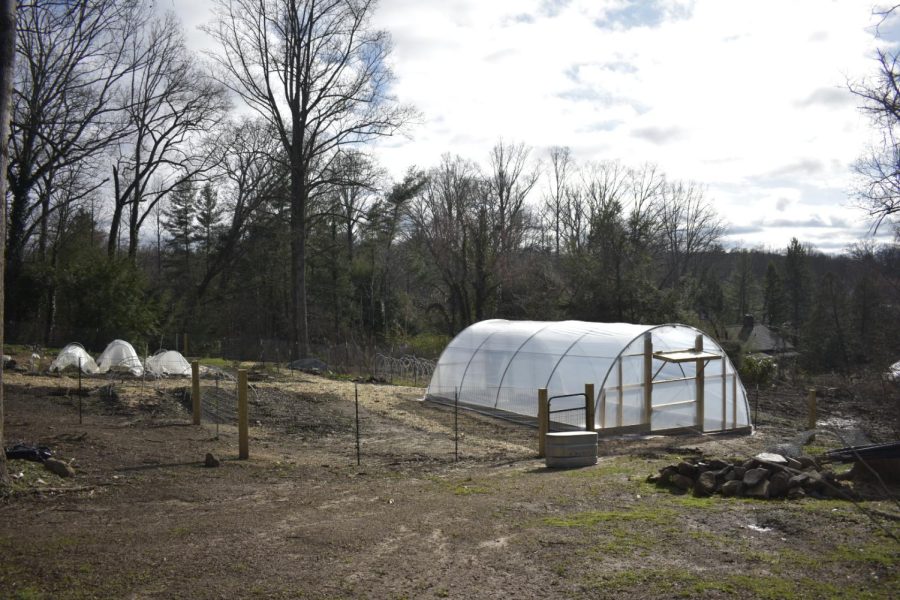 At the top of the driveway at 456 Merrimon Ave., an acre of healthy soil and an array of tomatoes, squash and garlic flourishes at Roots garden. Its wild appearance holds an emotional connection for UNC Asheville students who have done their part working the land.

“Me and Jamie kind of went a little wild with the seed selection this year,” said Evelyn Horton, Roots garden manager.

Currently under construction, Roots remains the largest garden on campus maintained by campus grounds operations, the Student Environmental Center, volunteers and students like Horton, who finds inspiration for her artwork in getting her hands dirty. Before assuming responsibility as garden manager, Horton found their bearings in the soil as a mentee last semester.

“I think a lot of the pressure is on the SEC for it to look nice and that’s pretty frustrating because there’s a lot of people who work there. Nature does what it wants, so it’s really hard for one person over the summer to maintain it,” the junior said.

Students in botany and agriculture courses participate in the gardens throughout the year, which can be tricky for those in charge of overseeing seasonal operations. Students and residents across Asheville visit the garden and said they enjoy the atmosphere, and some have even seen Horton’s artwork and others displayed on the grounds.

Roots mentee and freshman Jamie Shelor is learning how to work with the soil and organizing the grounds before taking over this summer as manager. Much of the gardener’s work is done indoors, researching and germinating seeds that will eventually go into the ground before winter’s final frost.

“At the beginning of this job, which now I feel like I’ve worked around and learned a lot from, is knowing when to plant what and to know what each plant needs,” Shelor said.

Although Shelor’s menteeship is just getting started, criticism surrounding Roots lies not in the crops produced but in its jagged appearance to UNCA visitors and the rest of the community. While gardening may not be the prettiest of jobs, Roots manager and mentee agree help is needed to keep the project going, first by spreading the word.

“Getting more people to care about these campus gardens is really important because the threat of it being taken away is super emotional for me and a lot of the people who are involved and have taken care of Roots in the past. I just think there’s a lot of people who have a lot to say about the space but are never there,” Horton said.

Volunteers and previous mentees said they find value and excitement in nurturing their crops to then donate their harvests to the Food Equity Initiative, and watching their peers forage an abundance of fresh herbs and vegetables. Naomi Todd, garden manager for Castanea Garden, said very few people show up to workdays outside of student eco-reps from the SEC.

Workdays for any of the three campus gardens takes place every semester at Greenfest, a twelve-day long event highlighting sustainability and ecological stewardship in urban and rural communities in Western North Carolina. Here, students are introduced to the gardens and green initiatives on campus, including student organizations like the SEC, who staff gardeners to maintain UNCA’s green spaces.

“After Greenfest, we generally have a couple people come out which is exciting because I’m not used to that happening. I think in general people don’t really know what goes on and if they are able to come and get involved,” Todd said.

To keep up with aesthetic demands from the advisory board, garden managers and participants need the support of their peers for its continued success.

“I don’t think that the gardeners get enough credit for all the work that they put into it and how much time it takes to grow things and how much energy it takes to maintain a garden. And it also takes a lot of emotional labor, too. It’s not just physical and that’s not really taken into account,” Horton said.