UNC Asheville’s music department keeps on rocking through the pandemic 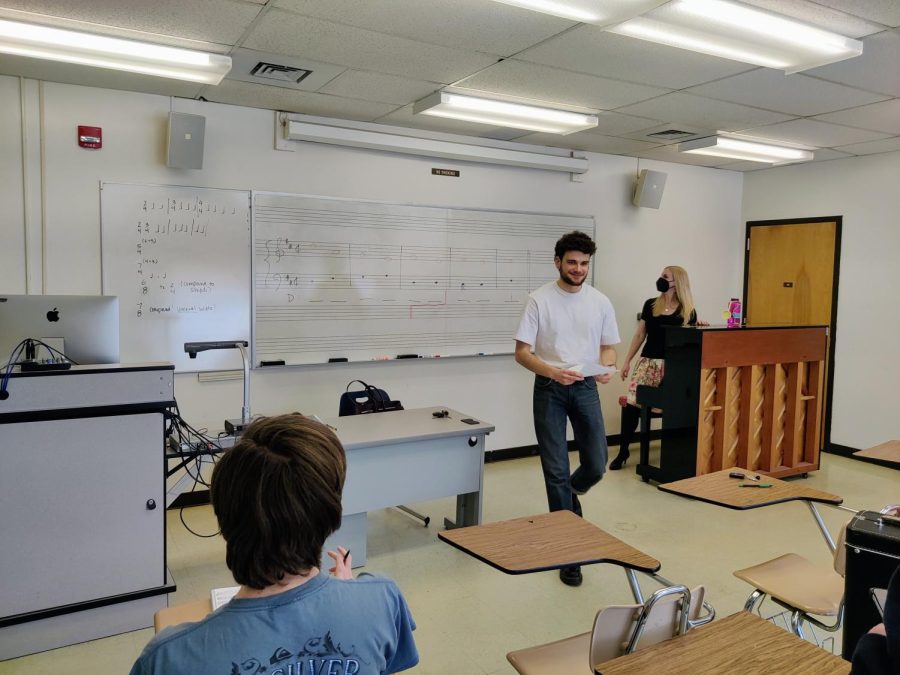 There’s a variety of music taught in UNC Asheville’s Lipinsky Hall, varying from smooth jazz to classical singing, from orchestral ensembles to creative improvisation. Melodic sounds carry out into the hallways as students sharpen their singing and playing skills.

“I love conveying concepts to students and helping lead them to bigger conclusions. I want my students to develop ideas about how to relate these conclusions to their own musical goals, whatever they may be,” said Andrew Jurik, musical theorist and adjunct professor.

“Teaching guitar was slightly tricky with COVID-19. One-on-one lessons require a different kind of communication as opposed to classroom teaching, and due to room limitations, I often taught with a big plexi divider in between the student and myself,” he said.

For this academic year, Jurik said the precautions are slightly loosened due to new research and scientific findings.

“The distancing didn’t seem to be as much of an issue but until recently masks were still required. Overall, I think everyone sort of understood why and we all went about matters similar to last year, but maybe with a sense of comfort,” he said.

The loosened restrictions have seen mixed results from his students, and according to Jurik, some are relieved and see it as a step moving forward toward a sense of revived normalcy. Others remain apprehensive.

“With this first week back after spring break, I see more masked than non-masked students. I’m getting the impression most students want to see how the numbers fare over the next few weeks,” he said.

Although he’s happy with the positive step forward, Jurik said there’s a part of him that’s still a little apprehensive over whether it’s too soon to repeal the mask mandate.

“I know the UNC system did not make this decision lightly and we’re observing the numbers and respecting the protocols still in place. It’s still a little too soon for me to say if it was a good idea to lift the mandate. I think I’ll be able to clarify my thoughts on this as the next few weeks pass,” he said.

Associate Professor of Music and Music Historian Toby King said he’s been an instructor at UNCA for eight years, and currently teaches ethnomusicology, or the interactive relationship between musical and cultural practices.

“I consider it kind of like the anthropology of music. I love to get students to think about music and its role in our culture,” King said.

The pandemic posed special challenges for music students on top of masking requirements and isolation, according to King. Because of that danger, the students were required to practice 12 feet away from one another instead of the typical six feet.

“I think my students felt isolated, as all students and faculty did. But singing and playing wind and brass instruments was understood to be particularly dangerous,” he said.

According to Christine Boone, aural instructor and associate professor of music at UNCA, the music department continues to follow all CDC and UNCA guidelines, even if the policy is more relaxed.

“Doing sight singing in class was incredibly difficult during the height of the pandemic. We had to go outside, even in freezing weather, to sing during the 2020 and 2021 academic year,” she said.

A classical vocalist, Boone said this is her eighth year teaching at UNCA, and said she knew she wanted to teach music theory ever since her freshman year of college.

“I was majoring in vocal performance and studying to be an opera singer. I found I was getting a lot of joy out of tutoring my peers with their music theory homework. I ended up getting a master’s and a doctorate in music theory,” she said.

Boone specializes in ear training, a music theory study where musicians learn to identify pitches, intervals, melody and chords, as well as other basic elements of music, solely by hearing.

Performances still went on in Lipinsky Hall despite the pandemic, and according to Boone, the department has many more planned for the remainder of the semester.

“We had some fully online concerts back in 2020, but our concerts have been back in swing ever since the following fall. We have a very full schedule of concerts and recitals coming up this spring,” she said.

According to Jurik, the Live at Lunch series is returning, as well as the vinyl listening talks at Citizen Vinyl, a record store and studio in downtown Asheville.

“There are many great events coming up, both on-campus and off. Everything for spring 2022 can be found on the upcoming events page on the UNCA music page,” Jurik said.