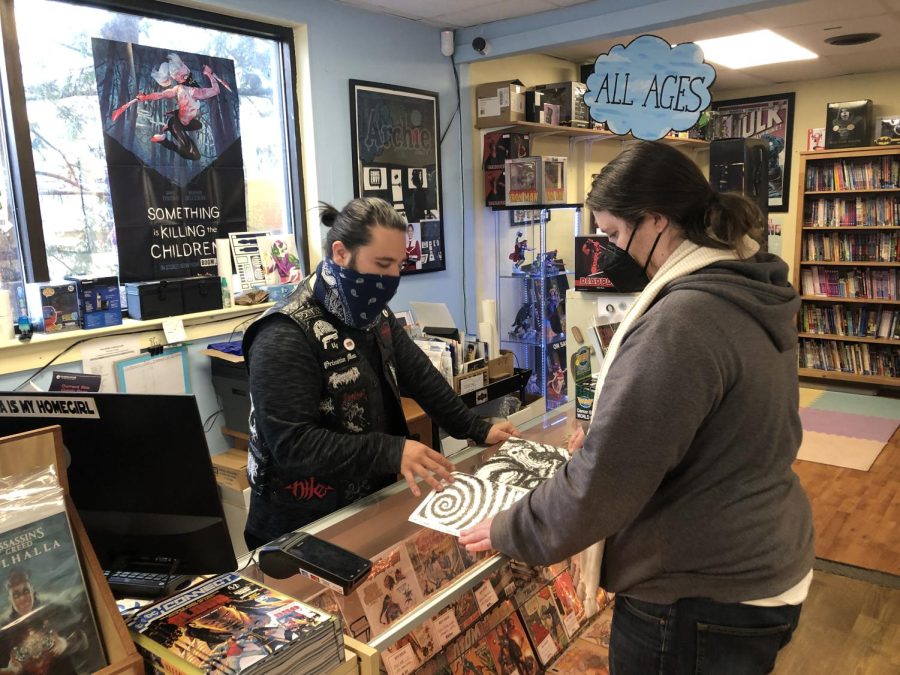 Comic Envy’s owner Allison Jenkins excitedly prepares for its annual Free Comic Book Day this May, when crowds of cosplayers gather to celebrate comics and manga in all their forms.

“It’s really important that Free Comic Book Day broadens comic horizons as well, bringing other writers into the spotlight instead of the well known Marvel and DC,” Jenkins said. “It’s fun because people in the community who know what’s up will go to all the stores in order and get a bit of the action.”

In business since 2008, Comic Envy operates from their downtown Asheville location to sell comics and cultivate love of all things nerdy. The scent of fresh paper and ink hangs in the air as avid fans scour the shelves, searching for the next story to catch their interest.

“I’ve been coming here since I moved into town, so around 12 years now,” said Mcneil Melvin, a long-time visitor to Comic Envy. “It’s always been my go to spot.”

A regular participant of past Free Comic Book Days, Mcneil commented on his excitement over the upcoming event in May.

“It’s a good stepping stone. You come in and get a couple free comics, but while you’re here you’re checking out other stuff you probably haven’t seen before and people you may not have met before,” Mcneil said. “It opens up your horizons for all kinds of stuff.”

Western comics and Japanese manga’s popularity exploded in the last few years, leading to many indie writers finding their works on shelves. Not everyone agrees with modern comics and manga, with some critics, like parents, objecting to the content of said media.

Despite a rise in legal action taken by parents of young children against the content of comic books and manga, Jenkins said she believes in the importance of intellectual freedom.

“We are not for banning books, and we are in fact ordering all of the books that are under threat of being banned,” Jenkins said. “We’re trying to back the libraries and schools, who are under more fire than retailers like us.”

Free Comic Book Day prides itself as an event for not just the customers, but staff as well. Jenkins and employees like Nick Vitaly, often cosplay during the event to the enjoyment of visitors.

“It was excellent. I came in dressed as Venom from Spider-Man, and it was a lot of fun,” Vitaly said, mentioning last year’s Free Comic Book Day. “The kids were excited as well.”

“I love what it does for the youth in the area. It really brings them in, gives them a place of bright colors and smiling faces. A place to share these stories with their friends,” Vitaly said.

Comic Envy did not allow COVID to interrupt their yearly celebration of comics, opting to take a more hands-on approach with the event in the past.

“During the first year of COVID, we gave comics out on the curbside. We wanted friends and family to be safe and entertained,” Jenkins said.

Vitaly elaborated on the importance of comics for youth, mentioning the efforts Comic Envy takes to reach out to younger fans.

“It’s very important for kids to be able to read things at the age that these lessons are very pivotal to their growth and support system, how they see themselves,” Jenkins said. “A lot more indie books, even Marvel and DC are branching out into these issues that older generations didn’t have to deal with.”

Comic Envy maintains a welcoming and relaxing atmosphere with the employees delighted to discuss any and all things with customers out of a passion for their craft.

“We are a reader first store, and what comes first is getting people in the door to read these stories,” Vitaly said.

Returning on the first Saturday of May, downtown Asheville’s Comic Envy plans to make this year’s Free Comic Book Day the best it can possibly be. With a total of five free comics per person, visitors will be sure to find something new and exciting to read.

“Wherever you are, if you enjoy comics then check out a local shop, because Free Comic Book Day is happening everywhere, not just Asheville,” Jenkins said.