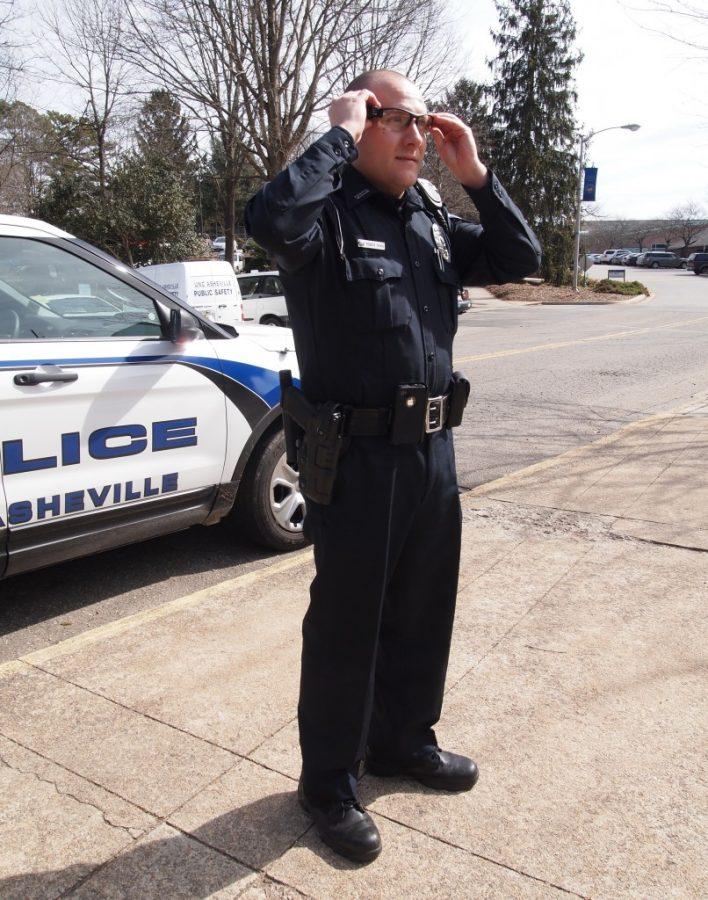 by Shanee Simhoni – Staff writer – [email protected]
The UNC Asheville campus police department enacted a new policy at the beginning of this month requiring all officers to record investigations and suspicious situations with body worn cameras, resulting in mixed reactions from faculty and students.
“We want to be transparent as a police department.  We don’t want to do things that lose your faith and confidence in us, and this is, I feel, an excellent way for the department to be transparent and to also provide that level of protection for the officers and the students and community members who interact with the police,” said Eric Boyce, the director of public safety at UNCA.


The new policy of body worn video cameras, effective Feb. 4, requires officers to record suspicious situations, investigations of incidents, traffic stops and any interactions that supply evidentiary value to an investigation, according to the official policy and procedure of body worn video cameras.
“I can see why police officers would want to have a camera, to make sure the validity of what they say and what others say. It kind of helps with making the encounter more objective,” said Kenneth Betsalel, a political science professor at UNCA.
These small, portable cameras, attached either on the clothing of the officer or on a fixture worn on the head, provide an effective perspective on suspicious situations, Boyce said.
“Although I do support an overall safer campus, I do not believe that it is necessary to film students,” said Morgan Lambert, a sophomore at UNCA.  “It could have use if the campus police force promises not to abuse this new technology.  Real crimes that are recorded can be acted upon more efficiently.”
In addition to providing a more versatile perspective, the body worn cameras are significantly more economical, costing $8,480 total including accessories and mounts. The previously used dash-mounted cameras cost $13,545 in 2009, said Boyce, the chief of the UNCA campus police department for about two and a half years.
“In the regular Chevrolet Impalas was a video camera, what we call a dash-mounted video camera.  Those dash-mounted video cameras are extremely expensive to get the product and then get the installation,” Boyce said.  “Some of the limitations are that they only record what’s in front of the vehicle.”
The new body worn camera systems record only when the officer thinks the situation requires it.  When not recording, the camera either buffers every 30 seconds, which allows for the filing of a visual pre-event during the last buffer period in case the officer sets the camera to record after important events already occurred, or the officer can completely shut the camera off, Boyce said.
“The evidentiary value of it is very good.  If the officers are responding to calls, if they’re interacting with the public, it protects, and those body worn cameras actually protect both the officer and the students in public that we’re interacting with,” said Boyce, a resident of Fletcher.
The policy and procedures of the body worn video cameras does not require officers to inform subjects when the officer decides to record them; however, the officer must disclose that information if asked.
“I see it as rather unethical to carry out this policy without clearly advising those it directly affects, the students,” said Lambert, a transfer student from Marymount Manhattan College in New York.
Although the new policy carries good intentions, any form of abuse has the potential to violate the idea of a free democracy, Lambert said.
“It can create, unless people really understand what’s going on, a kind of Big Brother feeling, that we’re being watched or being surveyed,” said Betsalel, a professor at UNCA for more than 20 years.  “I’m not saying that it is being used for surveillance, I’m saying it has that potential.”
The introduction of new technology, especially in law enforcement, often brings conflict in determining legal parameters of the technology’s uses and misuses.  As a tool, a body worn video camera that can be turned on and off at the officer’s discretion can be used and abused, said Betsalel, who specializes in the origins of democracy, American political thought and civil engagement.
“These are overtly-worn,” Boyce said.  “What they’re doing is they’re being transparent, and if there was an issue that came up, departments don’t get into the he-said, she-said type situation. They go back and look at the video footage and they’re able to take action based on what they actually see on the camera system.”

At the end of every shift, officers place the cameras on a docking station, where the recorded material uploads onto software called Evidence.com, which securely stores digital information.  Officers do not review the recordings of their cameras after the shift, Boyce said.
“I’m not suggesting anything dishonorable here, but I do feel that citizens, students and others feel that there are more ways in which government knows more and more about us, in situations that are new to us,” said Betsalel.  “Undoubtedly, situations like this will, if not at UNCA, at some campus somewhere, will result in some kind of litigation at some point in the future, I would imagine.”
Misuse, intentional obstruction, destruction or alteration of the system and its recorded material results in disciplinary action, Boyce said.
“It’s not like we’re mounting secret cameras. We just want to be able to record and document, provide for court, video evidence and audio evidence,” Boyce said.  “I haven’t found that departments who have deployed these body worn cameras have had issues with that.  What I have found is that there is a level of comfort among the citizens in that agency’s jurisdiction.”
Delete Image
Align Left
Align Center
Align Right
Align Left
Align Center
Delete Heading