Black students share their experiences with racism at UNC Asheville 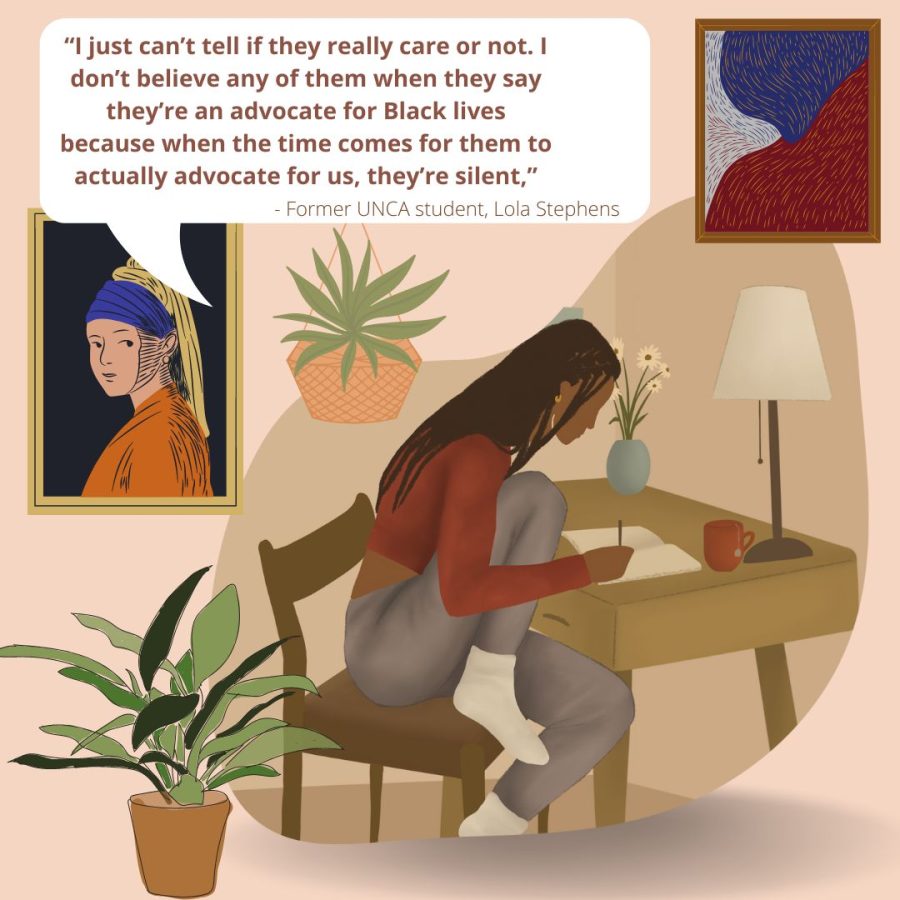 Shiasia “Asia” Beasley was in their second semester of their federal work-study when they decided they wanted to branch out socially and begin making new friends. They befriended one of their co-workers and soon started noticing some concerning characteristics about her.

“As I watched her interact with other people in the workplace, I started to see how negative and self-centered the way she was going about life was. It seemed very much like she was setting healthy boundaries with the mindset that she was the only person that mattered,” Asia said.

There had been times when their co-worker would tell people to stop talking to her while they were mid-sentence because she couldn’t handle the stress of what they were about to say.

There was one particular time when Asia’s co-worker had asked them for a hug, even though they hadn’t known each other for a long time. Asia hesitated when they gave her an answer, hoping the co-worker would have noticed their discomfort. She did not.

“At first I wrote it off as her trying to reach out for a friend. However, it felt like she was using me — a Black woman, who is stereotypically characterized as a strong emotional supporting character in people’s lives — for that role,” Asia said.

Asia didn’t notice this until later, when they decided to look back at their past interactions to see if they could have avoided putting themself through a stressful situation.

Asia’s co-worker would constantly seek guidance from them and confide in them when she was going through a tough time. Asia couldn’t understand why their co-worker was so comfortable with sharing such intimate details about herself when they had only been friends for a few weeks, and hadn’t spent much time together outside of work.

Asia thought it would be best to ignore those characteristics for the time being. They gave this budding new friendship a chance.

Later, they realized that was not a good idea.

Asia and their colleague-turned-friend had only spent time together outside of work on a few occasions. During those times they would go to Highsmith Student Union to get food and study, they even went to get pho one time.

The last interaction Asia had with their work friend was at Highsmith Student Union, when they got food and sat down on the upper-level of the building.

The two acquaintances were making casual conversation when the subject of what they wanted for their futures came up. Asia asked their co-worker what she wanted to do, just to be courteous.

Asia’s co-worker said she wanted to be a historical role-playing tour guide. Asia, being polite, asked what time period she was interested in, but when their co-worker told them, Asia started to get nervous.

Asia didn’t know how to respond, as they had never been in a situation like this before. When Asia hears that word, they think of slavery and the constant mistreatment of Black folk.

The conversation carried on, uneasy and tense.

Asia just couldn’t shake what their co-worker said, so instead of staying in an uncomfortable situation, they texted their roommates.

They asked them to call and make it seem like it was an emergency so they would have an excuse to leave.

Their roommates, concerned for their friend’s safety, called and then immediately went to the student union to pick Asia up.

“Bro, where were you? We’ve been trying to call you, we’re late,” one roommate said.

Their roommates ushered them out of the student union doors as Asia issued their co-worker a hurried goodbye.

When Asia and their roommates made it back to their dorm, they confided in them about the situation. They supported and reassured them about their reaction.

“For this to be a school that is based on diversity and informing people on real-world problems, she seemed very ignorant in how her obsession with the Antebellum period would translate to me, a Black woman,” Asia said. “When I hear the word ‘Antebellum’ I instantly think of slavery, poor treatment of Black people and a time of extreme white delusion of thinking what they were doing was OK.”

Asia can’t look at their former co-worker the same ever again.

“Every time I look at her, I imagine her dressing in that kind of clothing and proceeding to parade people around these blood-tainted lands in a happy-go-lucky accent,” Asia said.

If Asia could give any advice to an incoming Black student at UNC Asheville, it would be to find a good support system of people who can relate to their experiences.

A’Zane Troxler, a student studying chemistry at UNCA, washes dishes as she tries to recall specific moments when she has experienced racism in her field of study.

She can’t seem to recall any particular instances, they are so casual and happen so frequently now.

She has become so numb to the constant belittlement and disrespect, now it is just another part of her daily course schedule.

Wake up, go to class, get intelligence questioned, rinse and repeat.

“It’s a lot of imposter syndrome because of people invalidating you, your professors don’t really get on that as much because it is a STEM field, but certain parts of that can be racial bias rather than folks being critical,” she said scrubbing a pot, ridding it of last night’s pasta sauce.

She seems more concerned about the pot than the fact that she just said she experiences racial bias within her major.

A’Zane finally manages to think of a particular situation, a lab group from last semester.

Group work is an integral part of A’Zane’s field of study, and she rarely works on assignments by herself. A lot of the group-work she does is with other women, because professors understand the struggles women in STEM go through, so they try to create groups where students can feel comfortable sharing their ideas.

One of the women in A’Zane’s lab group would constantly invalidate anything anyone else would say during their group meetings.

“I kind of let it roll off my back because the disrespect is constant. Every single day, there’s always something someone has to say about you being in the field,” A’zane says as she rinses off the last dish and starts carrying her dishes back to her room, still not fazed by the words coming out of her mouth.

If A’Zane could give incoming Black students at UNCA any advice, it would be to let the disrespect roll off of their backs, but if it gets to be too much, then they should go to their professor or another faculty member to figure out how to remedy the situation.

Lola Stephens was genuinely enjoying the women, gender, sexuality studies course she was taking. She felt like she was learning useful information she could use in the real-world, but that feeling quickly changed after one particular class meeting.

Her class was analyzing a speech by Sojourner Truth called “Ain’t I A Woman.” They were comparing different versions of the speech line-by-line.

The professor is reading the lines aloud, but there’s no way the professor would say the word out loud. Everyone had the reading in front of them, it was a college level course, and there was a mutual understanding of what that word was — or so Lola thought.

The professor said it. Out loud. In front of the whole class.

Class went on as normal, though Lola was shocked no one else seemed to have an issue with what the professor just did.

How could a college professor think it’s OK to say a word that has a history of so much hate attached to it? How could no one else seem to care?

Lola couldn’t focus on anything the professor said after that. She was filled with anxiety trying to wrap her head around what happened.

After the professor was done speaking and everyone got their questions answered, Lola expressed her discomfort with what the professor did.

“Excuse me,” Lola said, trying to hold back tears. “I don’t know if you remember or not, but I clearly do when you said the N-word. You could’ve picked any other line to read, you could have substituted the word, you could’ve skipped over it. We are all college-level students, we know the weight that it carries and we know it is not OK. It just put me in a really uncomfortable position. I’m here to learn and I couldn’t even learn, I couldn’t even take what you were saying seriously, I couldn’t focus.”

Lola also addressed her peers, calling them out for their nonchalant behavior about the situation.

“Of course, I was only one of maybe two or three Black students in the class, who spoke up. None of the other ‘allies’ or people who ‘care’ about civil rights, social justice, Black Lives Matter and Black women’s lives said anything,” Lola said, her voice filled with disgust.

The class ended and Lola was overcome with so much anxiety, she felt jittery. She walked out of the room as she let the tears roll down her face.

Lola’s peers approached her after class, expressing their sentiments.

“I just can’t tell if they really care or not. I don’t believe any of them when they say they’re an advocate for Black lives because when the time comes for them to actually advocate for us, they’re silent,” Lola said with a tinge of sadness in her voice.

Lola did not return to UNCA the following year.

“This is directed to all people and everyone (at UNCA). Every day is an opportunity for you to be the change you want to see in the world. Every day is an opportunity for you to try to be a better person than you were yesterday. I get it, life is hard, we all make mistakes and we are all learning and should want to be learning something new, it’s just a matter of applying the knowledge that we learn,” Lola said. “It’s a lifestyle you have to live, to be anti-racist.”