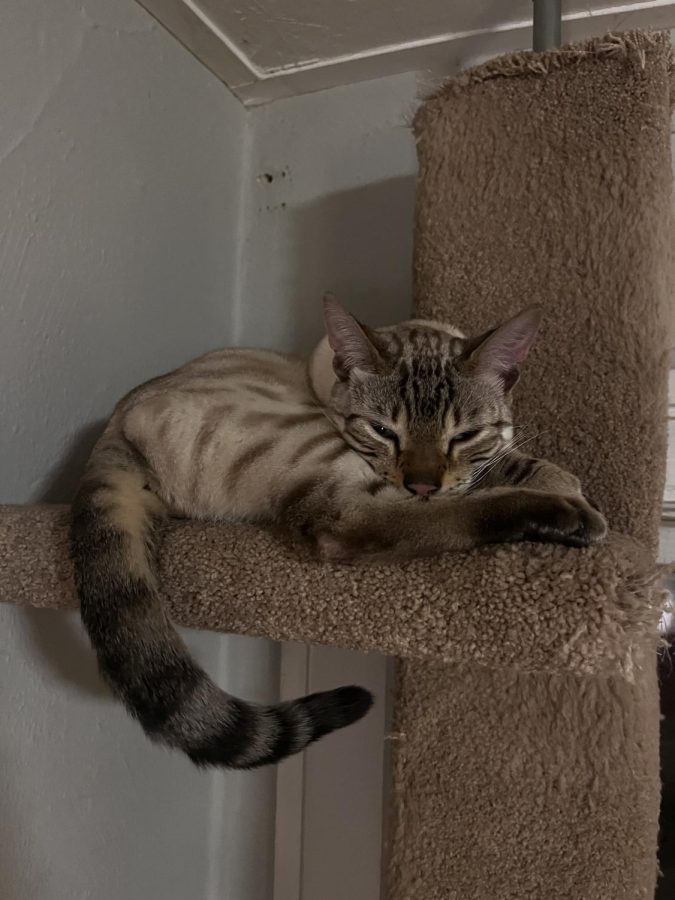 Boro rests after being rescued out of a tree.

Climbing trees can be a daunting, yet enticing activity. Cats are no exception to such a feat and despite having supposedly nine lives, cats can fall victim to getting stuck in trees with what seems like no way down.

Luckily for Asheville, Spence Cocanour, a retired Colonel from the Air Force, is no stranger to rescuing cats out of trees. Due to his training in combat controller specialty, Cocanour harnesses all the right skills when it comes to climbing trees and returning felines safely to their owners on ground level.

Cocanour said he used to watch a show on Discovery about rescuing cats and always thought the idea was interesting.

“One day, Amy caught me bringing tree climbing gear into the house,” Cocanour said. “When she asked why I had it, I told her I might have to rescue a cat someday.”

In 2019, Brother Wolf Animal Rescue put out a message on Asheville Cat Weirdos, a website for emergency veterinary funding, saying they needed someone to rescue a cat out of a tree and didn’t have the funding to pay someone.

“Amy came out and asked if I wanted to rescue a cat and I told her ‘absolutely’,” Cocanour said.

Since rescuing his first cat for Brother Wolf, Cocanour has rescued over 100 cats around the Asheville area.

“From that point on, I was hooked,” Cocanour said.

No two cat rescues are the same. Cocanour said his most challenging cat rescue was with a cat named Snowball, who outsmarted two other tree climbers before Cocanour could come and rescue Snowball who had been in the tree for over seven days and around 80-90 feet high.

“The trick is you have to get the wire snare behind the front legs of the cat or they can’t wiggle out,” Cocanour said.  “Snowball finally stepped through and I nabbed him.”

Clayton Jamison, the owner of a one year old cat named Boro, who has an inclination to chase squirrels into trees said he found himself at a loss for what to do when his cat climbed into a tree and was unable to climb down.

“There have been multiple times he has climbed into the tree and usually I can climb up there myself and get him down, but he was way too high this time,” Jamison said.

As the wind began to pick up and dark clouds rolled in Clayton said he called anyone he could think of to rescue his cat before the storm came in.

“I tried calling the fire department, but they were no help and told me to wait for him to come down,” Jamison said.

Unable to let his cat sit through the storm Clayton said he googled cat rescue options and came across a facebook page and sent them a message.

“Within 15 minutes of messaging Asheville Tree-Top Cat Rescue, I received a response and luckily the guy only lived a few minutes from my house and was able to come right away,” Jamison said. “I was shocked how quickly he scaled the tree and was able to lower Boro down in a net.”

Margaret Benfield, an employee at Brother Wolf for nearly four years, accredits cats’ interest in climbing trees because it’s a good way to stalk prey, get away from potential predators and because it’s fun.

“Just like humans, cats need an outlet for fun or enrichment,” Benfield said. “Outdoor cats may engage in dangerous activities, such as climbing a tree, simply because it’s fun. Many cats also climb to survey their immediate area, as perching is a natural behavior for them.”

Due to cats’ natural hunting instincts, squirrels and birds are often targets for more prey driven cats, such activities can be recreated indoors to allow cats to engage with their natural instincts in a safer way.

“Use a cat charmer or flirt pole for your cat to chase,” Benfield said. “This fulfills their hunting instinct and is also a wonderful way to bond with your kitty.”

Benfiel said cats can be an easy target for birds of prey when stuck in a tree and if your cat is reluctant to climb down and showing signs of distress you should seek help immediately. All cats possess different skills and motivations and some may be unable to climb down on their own.

“I would recommend checking hourly to monitor their behavior and location,” Benfield said.

While some cats benefit from outdoor time, the best way to keep your cat from getting stuck in a tree is keeping them indoors and supplementing them with enrichment opportunities like hunting, hiding, scratching and climbing to keep them happy and entertained.

“The majority, but not all cats can live happily indoors with appropriate enrichment indoors,” Benfeild said.