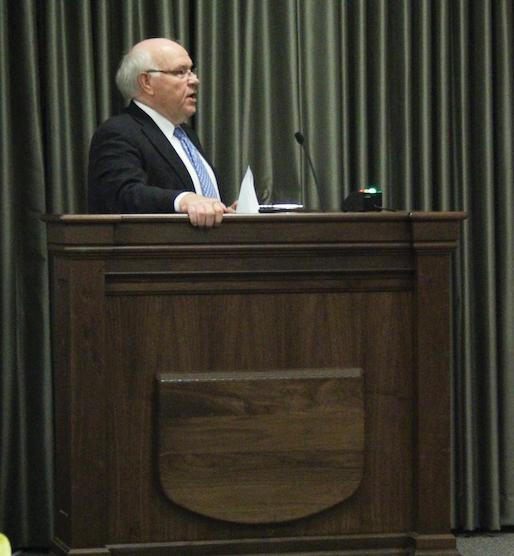 Joanna Woodson – Staff Writer – [email protected]
The Buncombe County Board of Commissioners voted 4-3 on March 18 recognizing domestic partners’ eligibility for county employee health benefits. The newly instated benefits were put into place on Monday.
“What I’m hearing from those that opposed this is fear. It is fear of the unknown, it is fear of something they don’t believe in,” said Lauren Mason, a local small business supervisor who favored bringing the benefits to all people.


The proposal was put together by the Diversity and Inclusion Committee of Buncombe County.  The committee worked together for three months in order to put together a proposal for the County Commissioners.
The commissioners were split down the party lines, with the four democrats – David Gantt, Holly Jones, Brownie Newman and Ellen Frost – voting yes, and the three republicans – Joe Belcher, David King and Mike Fryar – voting no.
This was the first time since being elected that the commissioners were split directly down the political lines.
“There are people in different situations who are willing to pay money – their money, that they make at their jobs – that should be available to them. We are all humans, we are all individuals and we all deserve the same rights,” said Mason.
In all, at least 60 Buncombe County residents voiced their opinion before the voting began, and more often than not, the people who chose to speak said they wanted to strike down the proposal, either citing a religious or business interest that would be harmed if the proposal were passed.
“Citizens should not be forced by government to validate and affirm through our tax dollars the behaviors that we find offensive and have been medically proven to be harmful to those engaging in them, and which has historically been proven to be harmful to society at large,” said Kathy Rhodarmer, a resident of Candler.
This new extension would only be available for those who can prove that they are in a committed, interdependent relationship for at least one year and plan to stay in the relationship indefinitely.
“With that, I believe the board is giving a slap in the face of the people of Buncombe County. We realize the domestic policy and its wording is only a smokescreen for gay rights,” said the Rev. Wendell Runion, the president of International Baptist Outreach Missions Inc.
The benefits include health insurance, dental insurance, life insurance and the Family and Medical Leave Act.
Buncombe County is only the fourth county in N.C. to recognize domestic partnerships. Orange, Mecklenburg and Durham became inclusive prior to Buncombe.
“All people are people of honor and respect. And to respect someone I don’t think we can just say we’re not going to say mean words to you, we’re not going to cut you down. We will offer the same benefits, the same privileges, to everybody,” said the Rev. Joe Hoffman of the First Congregational United Church of Christ.
Several cities already recognize the partnerships as valid as well, including Asheville, Chapel Hill, Charlotte, Carrboro and Greensboro. These are all cities known for being slightly more progressive than the average N.C. city, according to residents.

On May 8 of last year, the residents of North Carolina voted on and passed Amendment One, which Sen. Peter Brunstetter sponsored in order to keep the marriage between one man and one woman as the only valid partnership recognized by the state.
“In 2010, the same voters that elected this board voted for a N.C. constitutional amendment that marriage is not valid in the state unless it’s between one man and one woman. That vote was between 80 and 90 percent in favor, both in Buncombe county and the state of North Carolina,” Runion said.
Of the 9.7 million people residing in North Carolina, only 2.2 million voted.
Many residents said by passing this policy in Buncombe County, city councilmen are trying to sidestep the amendment and make domestic partnerships valid here.
The Diversity and Inclusion Committee also proposed a new respectful workplace policy that would address any discrimination and harassment going on in any work environment. This policy was passed with a yes vote from all council members.
“None of us look the same, none of us think the same, none of us should be expected to be the same,” Hoffman said.
Delete Image
Align Left
Align Center
Align Right
Align Left
Align Center
Delete Heading