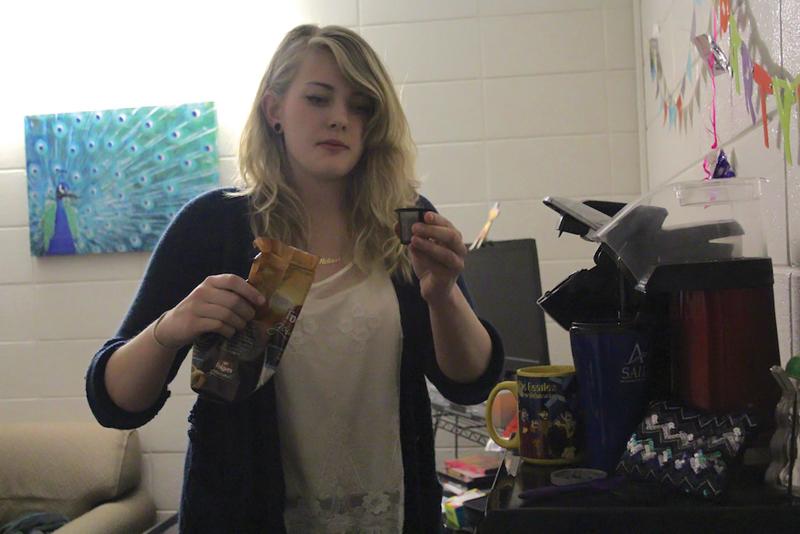 Classics student Melissa Huggins makes a cup of coffee in her resident hall. Coffee could pose a potential health risk to the DNA of frequent drinkers, according to a study released this year. Photo by Jorja Smith.

Student coffee intake steady, according to dining services
By Hanna Lesky – Staff Writer – [email protected]
Despite emerging health risks associated with coffee, some Asheville folks say they are not worried about the potential consequences.
“I know coffee is bad for me.  To be completely honest, I’ve been told thousands of times,” said UNC Asheville freshman literature student Taylor Greenleaf, a self-proclaimed coffee addict.
A recent study published in Food and Chemical Toxicology showed that some foods and flavorings, like coffee, activate the gene p53, which is usually activated when DNA is damaged.
“I don’t know if that would make me stop or drink it any less, though.  I’d have to think about it.  It’s one of those things that at this point, it’s just something I do.  I consider myself addicted, but then I don’t at the same time, because it just seems like a normal thing to me now,” Greenleaf said.


Greenleaf said she does not drink coffee for the caffeine, but for the taste.
“I can stop drinking coffee any day if I had to.  At least I like to say that,”  Greenleaf said.
Many students drink excessive amounts of caffeinated beverages like coffee in preparation for exams, according to UNCA dining services registered dietician Janet Zusi.
“Exams are a stressful time for college students.  My advice is to manage your time so that you do not have to have ‘all nighters,’” said Zusi.
According to Zusi, exercise and eating healthy are part of managing time.
“If you typically drink a cup or two of coffee daily, no harm.  But exam time is not the time to increase your intake of coffee and caffeinated drinks.  The rapid increase of caffeine unfamiliar to you can make you jittery and anxious – not a good thing when trying to study,” Zusi said.
Zusi said it is too early to tell how accurate the evidence is that coffee harms our DNA .
“As with most things, excessive intake becomes a problem.  If you are drinking a large amount of coffee daily, you are probably not drinking water or milk.  Many of the coffee drinks available are high in calories from added sugar and fat,” Zusi said.
The caffeine in coffee has already been shown to have an effect on people with gastric issues and hypertension, as well as interfering with iron absorption.
“Recent research has shown that, in fact, caffeine does not cause fluid loss except in cases of excessive amounts, greater than 500-600 milligrams or 5-7 cups.  Coffee does cause nervousness for those new to drinking coffee, so should be avoided during athletic competition,” Zusi said.
Zusi did not advise anyone stop drinking coffee, and its consistent popularity shows people will not give it up any time soon.
“Unfortunately, caffeine is a drug, so we’ve got everybody there,” said Krystal Jackson, an employee at High Five Coffee.
Jackson said any new health concerns associated with coffee were unlikely to make people quit.
“I don’t think people really would be affected drastically.  I don’t think our business would be affected drastically,” Jackson said.
People engage in risky behaviors everyday, according to Jackson.
“I think it’s almost just like anything else, like smoking cigarettes causes cancer, but that doesn’t stop people from buying them.  There’s no beneficial things about cigarettes, but coffee’s a good thing.  I mean, it’s a good habit to have, I think, out of all the habits out there that could potentially cause cancer,” Jackson said.
Jackson said the coffee shop attracts studying students year-round, but during exams, it gets packed.
“Even students studying don’t always drink coffee either.  It’s impressive how moderate people can be,” Jackson said.
Delete Image
Align Left
Align Center
Align Right
Align Left
Align Center
Delete Heading