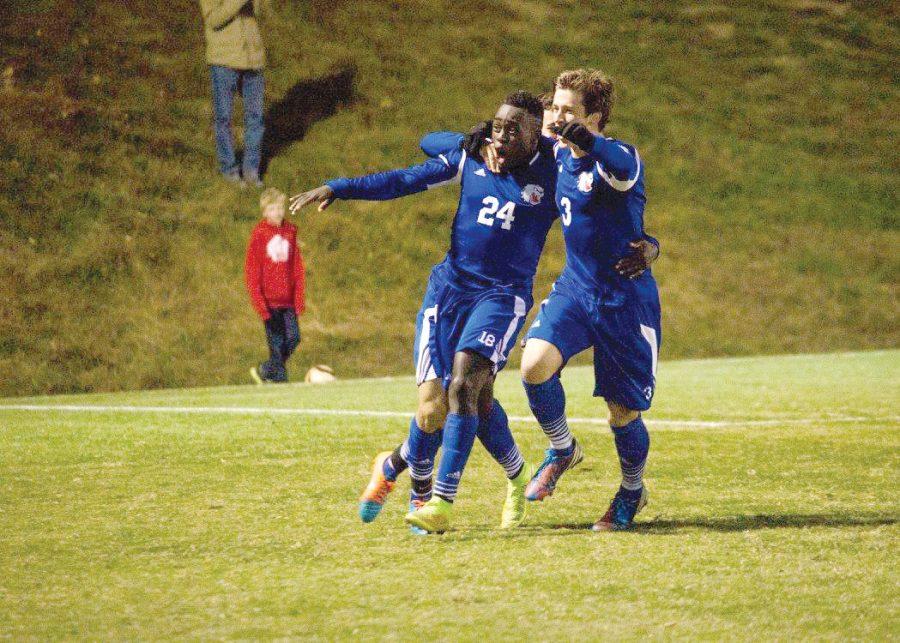 Jackson Allen celebrates his overtime game-winning goal in a game versus UMass at Greenwood Field. Photo by Adrian Etheridge - Contributor

The UNC Asheville men’s soccer team won in overtime with a goal from sophomore Jackson Allen in the 91st minute of play to stay in contention for one of the final spots in the conference tournament.

“We had some video on UMass, but it was from earlier in the year. We had some ideas to what they were going to do, but we really weren’t that familiar with them,” said Matt Kern, head coach of the UNCA men’s soccer team.

“We have been playing better and defending better. We have just had trouble scoring goals. We were really focusing on ourselves, taking more shots and having a little bit more possession in the attacking half.”

University of Massachusetts players seized control early, taking the first several shots of the game, and went up 1-0 on a goal by Matt Mooney in the 16th minute of play.

“I thought we were really poor for the first 15 minutes of the game. The sun was very difficult to deal with. From the bench, you almost couldn’t see the field and the players had a hard time seeing past 10 yards. We didn’t connect more than four passes in the first 15 minutes of the game. After that, we settled in and played much better,” Kern said.

The Bulldogs tied the game up at 1-1, when Paul Egle connected on a penalty kick in the 48th minute of play. The kick was awarded after the UMass goalkeeper pulled Allen to the ground before he could take a shot on a wide-open goal.

Asheville almost won the game in the 87th minute of play, when a free kick from Victor Aguiar hit right of the crossbar.

Overtime was short-lived as Allen scored on a counter attack in the first minute of overtime.

“It was amazing to score that goal to win the game. It was crazy. I didn’t think we would get the win that early into the over time so it was really exciting. Everyone said they were glad because it’s cold out here,” said Allen, sophomore.

“It took a lot of mental strength for us to come back and pick up the win. We have had a hard time with that this year. We’ve been down a lot and not been able to come back. Everybody really battled and we came out with it.”