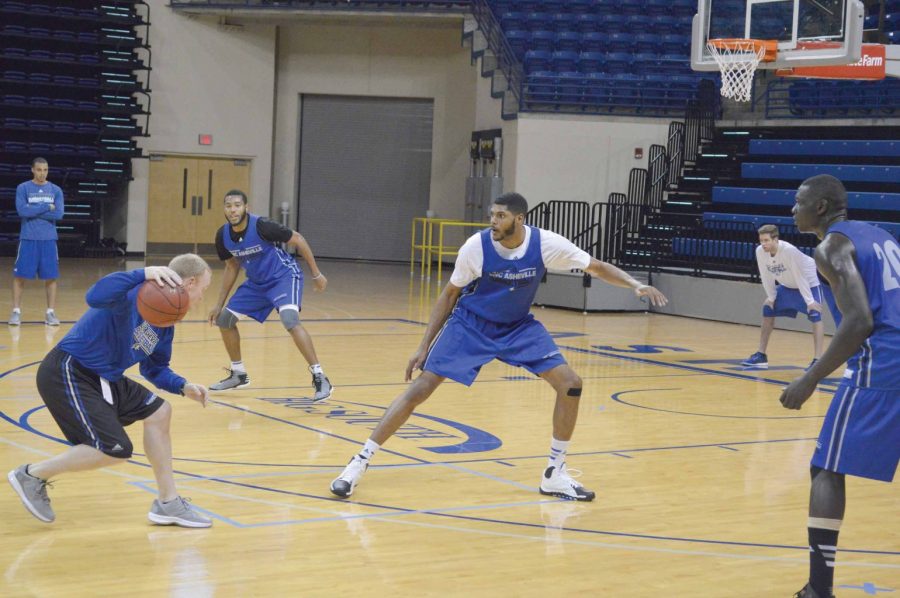 Giacomo Zilli, a sophomore forward from Italy, goes up for a shot during practice at Kimmel Arena. Photo by Max Carter - Staff Writer

The UNC Asheville men’s basketball team is confident in their potential for success as preparations for the upcoming season are underway.

“We exceeded our expectations last season, so we are looking to do the same this year,” said Andrew Rowsey, sophomore point guard. “The goal is to win the Big South and do whatever we can to do that.”

Last year UNCA surpassed the preseason predictions and finished second in the South division of the Big South Conference.

According to Rowsey, after this year’s sixth place projection the team hopes to have a similar outcome.

Nick McDevitt, who is in his second year as head coach, said this year the conference is full of experienced teams, which could pose difficult matchups.

“There are veteran ball clubs that are really good in our league. Some of the teams that finished ahead of us last year have a lot of players coming back.” McDevitt said. “It’s going to be a tough challenge for us this year. There are a lot of tough teams in our league.”

The Bulldogs brought back 11 members from last season, one being point-guard playmaker Andrew Rowsey — who made an immediate impact as a freshman.

In his first season Rowsey set a UNCA single-season record for most three-pointers made at 106. He was also named Big South Freshman of the Year, earned first-team All-Conference honors and this season was voted into the Preseason First Team All-Conference selection.

During the offseason UNCA acquired five freshmen and added Logan Johnson as an assistant coach to the staff.

Coaches and players said these additions have made an immediate impact to the team.

McDevitt also said Johnson is fitting into his role as one of the assistant coaches.

In 2005, Johnson, a native of Tennessee, was recruited by UNCA to play basketball, but instead he chose conference rival Coastal Carolina University.

After college he went on to become the assistant coach for Ouachita Baptist University for three years before joining UNCA’s coaching staff.

McDevitt said Johnson was someone he always kept an eye on—ever since UNCA tried recruiting him—and is happy to now have him part of his coaching staff.

This year the job of managing inside the paint will go to 7-feet Jaleel Roberts and 6’9” Chudier Pal, both senior centers.

“They have differences to their game so our playing style may vary to a degree depending on who is in the ball game,” McDevitt said. “They’re both doing very well and I like what I see out of both of them.”

Even with two powerhouse centers, Giacomo Zilli also deserves mention when it comes to the inside presence. Standing at 6’9” and 255 pounds, coaches acknowledge the sophomore forward most for his aggressiveness and work ethic.

“Look at his stature. He’s a big, strong, bulky kid and he’s got a great attitude,” McDevitt said. “He likes playing with contact and throwing his body around defensively. I like that about him. If he keeps putting in the hard work that he has, his future is bright.”

Also making an appearance this season is Marcus Neely who was red-shirted last year due to an injury.

This season the Bulldogs are scheduled to contend against multiple programs from major conferences with games against the University of South Carolina, Eastern Carolina University, UNC Charlotte and the season opener versus Wake Forest University.

“I like our schedule a lot,” McDevitt said. “It gives our fans a chance to travel to our away games with the proximity of some of our big games.”

Multiple members of the program said the team set their sights high and are optimistic about what can be accomplished this season.

“Every team wants to win a championship and that’s our goal each and every year. We have our work cut out for us but our guys are up for the challenge,” McDevitt said.

Roberts, along with Corey Littlejohn are the only remaining players a part of the 2011-12 championship team. With this being their last season, Roberts said he would like another opportunity to bring a Big South Championship to UNCA.

“We have to have the mentality that we can beat every team in our league and that’s what we are going to try and do. We have a mindset that we are going to go out there and fight,” Roberts said. “I’m trying to do whatever I can, block shots, get rebounds. It’s going to be a lot of hard work but one goal is to be the hardest working team. It takes everybody.”