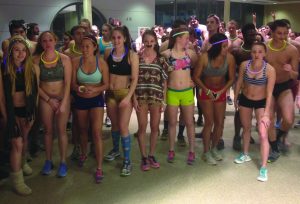 By Michael O’Hearn – [email protected] – Staff Writer | Feb. 25, 2015 |
Students and alumni at UNC Asheville dodged the frigid cold temperatures Thursday evening to race each other in the Student Alumni Association’s fourth annual Nearly Naked Mile on the indoor Kimmel Arena Concourse as part of this year’s Homecoming festivities.
Zak Carroll, sophomore, is a SAA member who volunteered to operate the check-in table prior to the race. Carroll said there are two main goals beyond promoting Homecoming that SAA hopes to accomplish through the Nearly Naked Mile.
“I am part of the SAA, so we’re here to sponsor the event. I’ve never been able to participate in the Nearly Naked Mile for the two years that I’ve been here at UNCA,” Carroll said. “Donating clothes to the Asheville Buncombe Community Christian Ministry and promoting health and wellness where people can come out, take their clothes off and have fun running a mile is what the Nearly Naked Mile achieves.”
Luke Howe, senior, is president of the Sigma Nu fraternity on campus that volunteered to help organize the event. According to Howe, the Nearly Naked Mile not only kicks off Homecoming weekend, but also serves as a donation event for the Asheville community through ABCCM.
“This is the first event that we have for Homecoming so it’s all about pumping everyone up for Homecoming and getting everyone excited,” Howe said. “It’s also a clothing fundraiser for the ABCCM, which is a nonprofit organization that caters to homeless people and those people who need clothing in general.”
Participants who wanted to compete in the race donated clothes to the foundation upon checking into the event, Howe said. According to tallies taken by the Student Activities, Involvement and Leadership committee on campus following the race, more than 500 pieces of clothing were donated by runners.
“Each year, we have an increase in the number of participants at the event,” Howe said. “For instance, last year we had 193 runners in the event. It’s kind of like a curse where, each year we do this, there’s been cold weather or it’s been raining.”
Due to cold weather, the Nearly Naked Mile was moved indoors this year. According to the data from Howe following the event, only 150 runners participated Thursday evening, down 23 percent from last year. Howe said he and the SAA were happy with the number considering the change of location.
Louie Edelstein, sophomore member of the Sigma Nu fraternity, said that he and his group enjoy helping with community events both on campus and in the Asheville area.
“This is one of the most popular events here at UNCA during the spring semester, and Sigma Nu loves volunteering here and have done so since it began three years ago,” Edelstein said. “We also go out to the Children’s Mission Hospital on the first Tuesday of every month as part of our required community service each year. We like being involved on campus and the campus events as it gives us a good campus presence.”
Participants in the race had to run seven laps around the concourse, according to Howe. Brandon Watson, junior, was warming up in the Student Recreation Center gymnasium prior to the competition.
“I am cold, I am nearly naked and I donated a lot of clothes to be here,” Watson said. “In the name of Homecoming spirit and my organization, Bulldog Nation, I threw on 15 shirts and took them off to give to people in need that I don’t even know. This event brings together this community, especially the student organization community who are all out here doing this with me.”
Upon completing the race, Luke Ainsworth, freshman, returned to the SRC and said although this was his first time participating in the Nearly Naked Mile, the race was nothing he could have expected.
“Oh man, I feel bad. I’m so out of shape, but this was so much fun,” Ainsworth said. “I didn’t know what to expect and didn’t know this was an actual race. I was not keeping the right pace and I was burnt out by lap six and that’s when everyone started passing me. But I thought it was a great way to kick off Homecoming weekend.”