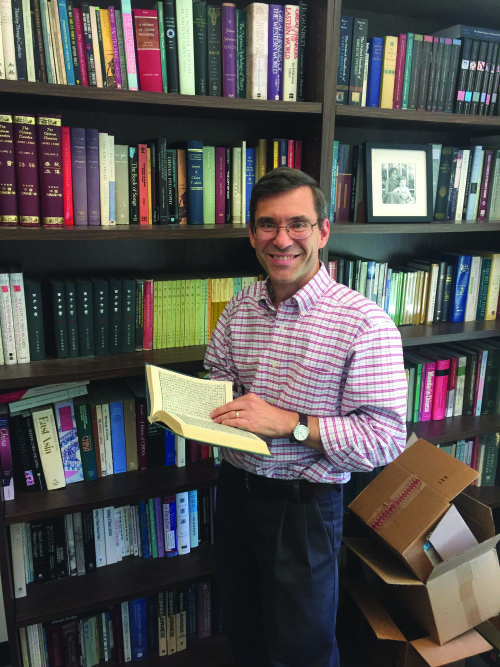 (Photo by Jason Perry) Grant Hardy poses for a photo in his office.

By Jason Perry, Arts and Features Writer
[email protected]
White walls, a desk, a laptop and a bookshelf. This is where Professor Grant Hardy contently spends his days.
He walks over to the bookshelf and carefully retrieves a worn-out book. It’s seen better days.
Memories flood Hardy’s face. It was one of the books that saved him on his journey.
He recalls a moment before he owned the book.
“All the signs were in Chinese, there wasn’t any English anywhere,” Hardy says, staring at the book. “It was almost as if I was illiterate. I had no idea, and of course it is Chinese characters, so you can’t sound it out, you can’t look it up in a dictionary.”
Professor Hardy is past that now. He can easily read Chinese characters and speaks Chinese fluently.
Hardy began his freshman year of college at Brigham Young University in Utah, a Mormon university. It’s where Hardy’s life opened up.
“I feel like when I first went to college is when I first felt like my real self,” Hardy says. “The lectures, films, books, journals and classes. That’s my natural self.”
Hardy says he was always the bookish type in high school, even though he did not come from a very academic family. He often read about culture and history, so when it came time to pick a major, Hardy chose something new.
“First semester of my freshman year I signed up for ancient Greek,” Hardy says excitedly. “Why else would you go to college, unless you can study something like that which was not offered in high school?”
Hardy says he focused on his Mormon faith just as much as he did his schoolwork. He volunteered to go on a Mormon mission after his freshman year, a trip that lasted for two years.
“You don’t choose where you go.You just volunteer and they send you some place,” Hardy says. “I received a letter from Salt Lake City that said, ‘Congratulations, you are going to be learning Mandarin Chinese, and you are going to be spending your next two years in Taiwan.’”
Hardy’s pleasure in life is reading, but he says he was soon in a country where he couldn’t read anything.
“I really didn’t know anything about China before I went,” Hardy says. “You go to a language training institute, so I was there for three months. It was intensive Chinese instruction all day, every day. After three months, they send you. I knew a little bit of Chinese when I got there. I tried to learn as fast as I could.”
Hardy says he arrived in central Taiwan with strict rules. He had to stay in a central area,could not watch TV or listen to popular music and could only read church-produced scriptures.
But, there was a loophole.
Hardy’s mission president allowed reading about Chinese culture if it helped him to become a better missionary.
Bingo.
Hardy says he quickly found an address for an English bookstore.
“They had basically pirated editions of English language history of China,” Hardy says. “I ordered a bunch of those. Missionaries are supposed to get up at 6:30 every morning, but I would get up even earlier so I would have time to read about Chinese culture.”
Hardy stops gazing at his old book. The title is Sources of Chinese Tradition, but it’s just barely legible. It’s the same book he purchased at the English bookstore, he says.
Hardy places the book back on his shelf, next to several other books from his trip, including four volumes of Science and Civilization in China along with Five Confucian Classics.
Hardy says his mission was difficult. He did a lot of soul searching, his new knowledge about Chinese culture helping him discover Buddhism, Confucianism and Taoism.
Hardy’s discoveries, he says, made him question his Mormon faith.
“I sort of worked things out, and I found things that worked for me,” Hardy says. “I am a believer, but I think it is pretty natural to have doubts and wonder about things.”
Hardy returned from his mission trip a different person.
He went to Yale and got his doctorate in Chinese language and literature. Hardy says he then became a professor.
Hunter Gomes, a former student of Hardy’s, says Hardy’s stories helped him learn.
“He gave a lot of personal stories about what we were learning,” Gomes says. “That helped me connect things easier. He is really interested in what the students have to say, which is nice.”
Humanities Director Brian Hook says he has been very satisfied with Hardy’s work.
“He is an excellent lecturer, a kind and generous colleague, and I have found him to be a deeply compassionate person,” Hook says. “He is also one of the most disciplined and brilliant scholars I know, and his breadth is amazing. He studied Greek in college, Chinese literature and history in graduate school, and is one of the foremost scholars on the history of Mormonism.”
Hardy also writes books.
Books can open up someone’s world, and Hardy says he wanted to be a part of that.
“There is a satisfaction of increasing the amount of knowledge in the world by a tiny bit,” Hardy says.
Hardy picks up one of his first publications, a book about Chinese historian Sima Qian, and quotes him.
“‘I have placed one copy into a famous mountain and the other in the capital where they should await the sages and scholars of later ages,’” Hardy says.
Hardy says he relates to this passage on a personal level.
“He put everything he had into this book hoping someday someone would understand him and would appreciate what he did,” Hardy says. “I could be that guy.”
Hardy puts his book back onto the shelf, and says he plans to write many more.