The silence that binds: How to cope with deployment 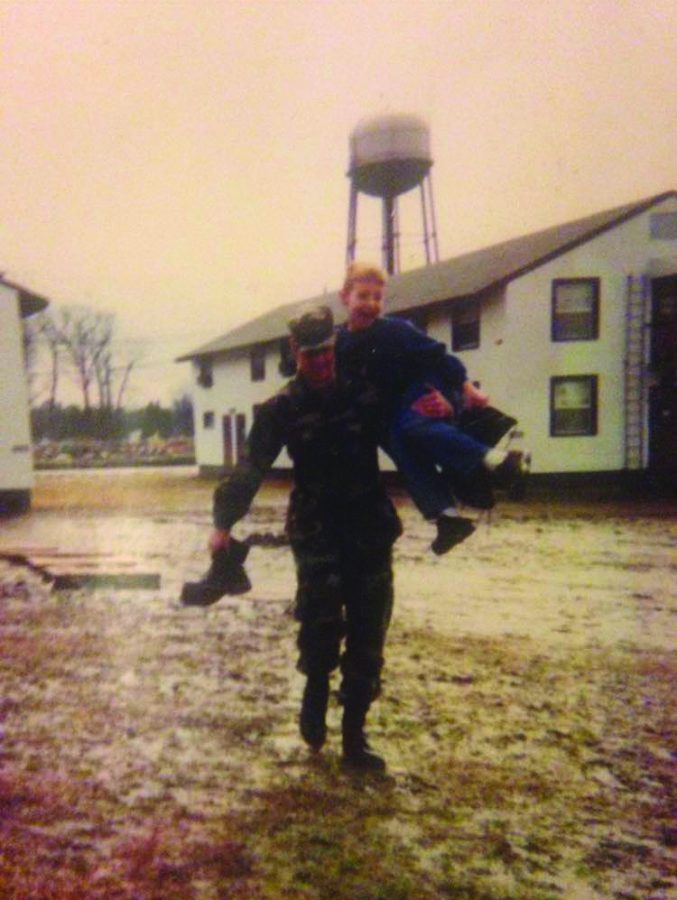 By Jason T. Perry – A&F Staff Writer – [email protected]
My vision was blurry, and I could taste the salt on my face. My family and I waited for the bus.
I prayed it wouldn’t come.
Sad, confused, angry, helpless. The look on my face said it all. Why is this happening? Why can’t I stop it? I don’t like this. Make it stop. I had never felt that way in the short seven years of my life.
Surrounding us were countless families, all of them with the same expressions on their faces. Everywhere I looked, I saw camouflage.
I knew the basics of what was happening, but I was not old enough to fully comprehend the whole situation.
According to the U.S. Department of Veteran Affairs, by the end of 2008, 1.7 million American service members had served in Operation Enduring Freedom and Operation Iraqi Freedom. Forty-three percent of active-duty service members have children.
These children face the challenges inherent in having a parent deployed. Many of them must also cope with living with a parent profoundly changed by war.
As I watched my dad board the bus, I didn’t know when I would see him again. It made me angry. No one could give me the answer because the length of his deployment was unknown.
“Make sure you have a support system,” says Rodolfo Ramos, a veteran of the Marine Corps and current student at UNC Asheville. “Not just from other military spouses, but from your own family as well.”
Families who understand how to cope with a loved one’s deployment are more likely to overcome emotional adversities.
The VA website on post-traumatic stress disorder reports that parents need to take time to talk about war and deployment. Talking can strengthen a family’s bond. Children tend to understand when something is being hidden from them, and it is good to be honest without overburdening them.
Ramos recalls explaining to his five-year-old stepdaughter he was being deployed.
“You have to explain to her that you are going to work,” Ramos says. “She understood that, but I don’t think she understood the whole six month thing. She probably thought I was going to be gone for a month.”
Ramos says explaining it as work makes it easier because children just look at it as a job.
Still, I don’t remember how my parents told me. I can’t imagine being the bearer of such news, but I do remember the tone of their voice. It was somber but sweet. Deep inside I felt comfort from the caring sound of their voices.
Tammy Walsh is a mother of two whose husband has undergone two deployments.
“I think a lot of it is dictated by the parents,” Walsh says, “and what kind of stress you bring into the house is what they will pick up on.”
Walsh tried turning a negative into a positive. She invited families over to her house to pack care-packages.
People would bring food and socialize, and her children looked at it as a party.
Ramos suggests that staying busy is the best way to get through a deployment.
“That’s what a lot of spouses forget,” Ramos says. “If you sit around moping that your spouse is gone, your day is going to go really long. If you go out and do something for yourself and your family then your day will go by fast.”
Walsh says she took a similar approach.
“Whatever you have to do to get through the day is what you do,” Walsh says. “I just kept myself so busy I didn’t have time to think about it.”
There were days where I sat in my room and stared at a picture of my dad. All I wanted was for him to be home.
My mom would take my sister and me out to eat, to the mall or to the pet store. We would wake up early, and my mom would go walking, and I would ride my bike. Every day was tough, but the busy days were easier.
Operation Purple, an organization that provides free camp to children of veterans, states that one-third of children report symptoms of anxiety when a parent is deployed overseas.
Brittany Parker, daughter of a medical doctor who is deployed every 14 months, says she recalls her brother acting out.
“My mom would yell at my brother,” Parker says. “My brother would just be like, ‘Nope, sorry, Dad is not here, I do not have to do it.’”
Walsh says her daughter had bed-wetting issues when her husband was away.
The VA reports common symptoms such as bad temper, tearfulness, change in sleep patterns and not wanting to go to school.
Having a support system is one of the best ways to cope with a loved one being deployed. Surround yourself with family members, other military spouses and friends. Their job is not to mourn with you, but to help you stay busy and positive.
Ramos says not to expect a phone call or an email every day, but to know that the loved one will contact you when they can.
My mom, sister and grandma always surrounded me. No other kids my age understood what I was going through, but being with family who did helped.
The day my dad came home was the best day of my life. My anxiety melted away. It remains the toughest thing I have ever had to go through.
My eyes are still blurry, and my face still tastes like salt, but it’s now because I feel pride for my dad, and I see the courage in my family.