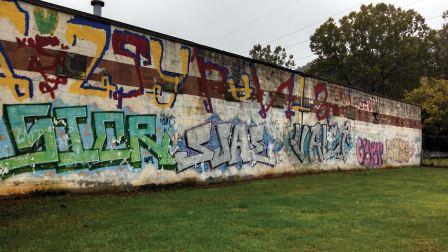 
By Lee Elliott, contributor
Asheville’s graffiti taggers continue vandalizing the city despite facing stiff fines and severe legal consequences, according to the Asheville Police Department.
“I don’t think anything will stop them,” said artist and graffiti advocate Kyle Lechner. “I see it as art, as some unheard people making their mark.”
Lechner, who expresses himself through more traditional forms of art, said graffiti practitioners view tagging as a way of life, channeling their feelings into art for the masses to see.
“There is a difference between vandalism and graffiti writing,” Lechner said.
Zen Sutherland runs a photo blog dedicated to documenting the Asheville graffiti scene, following some of the most prolific underground painters since he moved to the city 12 years ago. Sutherland said he maintains good rapport with the local graffiti writers.
“When I started out, I wasn’t intending to be the photojournalist for graffiti artists, but it was so fascinating,” Sutherland said. “It’s something that changes constantly. It’s colorful, it’s amazing and it might not last forever. You can see a great piece and tomorrow it’s gone.”
Sutherland said as graffiti artists become increasingly bold, the graffiti becomes a part of the city, and Asheville business owners want to hire street artists to paint murals on their buildings.
“If you’re doing an actual work of art and putting effort into it, then it’s definitely art,” said Michael Evola, UNC Asheville art student.
Evola said Asheville’s graffiti enhances the city’s aesthetic and provides a brilliant backdrop. He also understands how it might irk local property owners.
Not everyone appreciates the illegal artwork. Fed up with the amount of graffiti in the city, the Asheville city government set up a program aimed at stopping what it sees as a wave of rampant vandalism, according to Department of Public Works officials.
The anti-vandalism program, 1-2-3 Graffiti, commenced in 2014 with a $300,000 budget from the city and an anonymous donor. It established stricter fines for offenders, temporarily funded vandalism cleanup and connected property owners with licensed graffiti removal contractors, according to the Asheville city government.
During the course of the program, 1-2-3 Graffiti funded contractors to remove 259 graffiti tags from area businesses and properties, according to the Department of Public Works.
The city government discontinued the program Sept. 30 and after more than a year of graffiti removal, the city allocated roughly $70,000 toward vandalism cleanup, according to 1-2-3 Graffiti officials.
Aside from harsh municipal fines and mandatory community service, the North Carolina state legislature recently passed a bill specifically criminalizing graffiti, meaning repeat taggers may face felony charges.
Under the bill, first-time offenders would be charged with a class one misdemeanor for small-scale graffiti, while large-scale graffiti writers or repeat offenders would be charged with a class H felony and face mandatory minimum jail sentences.
“I don’t think that graffiti writers are going to be scared off by felony charges and facing jail time, but it will probably mess up some of their lives,” Lechner said.
Under federal law, anyone found guilty of a felony loses the right to vote, hold public office or become an elector in the Electoral College. Felons are also prevented from attending major universities and colleges and from owning firearms.
Sutherland said felony charges may dissuade a potential graffiti artist, but there are other more proactive ways to channel their artistic energy.
He suggests free walls provided by local property owners as blank canvasses and legal outlets for graffiti writers are a smarter solution to the city’s graffiti problem. With open mural space available, Sutherland said, graffiti writers have a place to practice their art without trespassing and vandalizing.
“I’m a big proponent of free walls. I work with businesses to offer free walls for a month, if the wall is fixed at the end,” Sutherland said.
According to Graffiti Hurts, an organization dedicated to stopping graffiti, most graffiti taggers consist of young teenage males seeking a creative outlet not provided to them through traditional means, such as the art classes that turned Kyle Lechner into a professional artist.
“I never believed that tagging someone else’s property was the right thing to do, but if it’s the only place to get your message out, then you’ve got to do whatever to get it out there,” Lechner said.
Delete Image
Align Left
Align Center
Align Right
Align Left
Align Center
Delete Heading