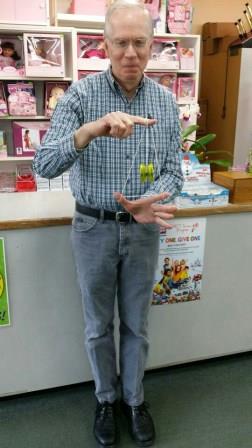 
By Matt McGregor, Arts and Features Assistant Editor – [email protected]
9/16/2015
An upright bass keeps up with the random off-beat percussion instruments backing scat singing, set to a story about a 9-foot dragon and a 4-foot boy.
The dragon threatens to eat the boy, and the boy must defend himself.
In this age-old story of the underdog, the boy’s only weapon is his imagination.
“The dragon is big and mean and scary. The boy has the advantage: dragon is imaginary,” sings local musician Billy Jonas through the store speakers. “Be-dop-bop.”
The afternoon music of choice plays at The Toy Box on Merrimon Avenue, where inanimate toys come to life in the secret world of the playful mind.
“It’s hard to get kids to use their imaginations today. They are funneled from one program to another, whether it be sports or dancing or music. And they don’t have the opportunity to use that imagination,” said The Toy Box owner Gary Green. “In their down time they play with electronics. If they have a toy it is an action figure based on a movie. The electronics they get today aren’t geared toward the imagination; they are geared toward immediate response. It’s OK for occupying time but it does not utilize your mind’s ability to create something.”
The significant lack of technologically-advanced toys and video games creates a sense of emerging from a time machine built with Legos and into a toy store in the 1950s.
“Kids aren’t learning anything from video games other than hand-eye coordination. They’re also training their mind in a very fast response in which human life does not reflect,” Green said. “For example, if a child plays video games at an early age when his or her brain is adapting to the environment, their brain is adapting to a fast-paced video and life doesn’t work like that, so when they get to school they can’t sit still. They create more problems than they solve.”
Larissa Matthews said she comes here because she appreciates the selection of toys.
Her son searches for a space costume to put on their soon-to-be traumatized speckled hunting dog.
“They have carefully chosen toys that are good for the imagination,” Matthews said.  “And we don’t want to support big box corporations, though it’s sometimes more convenient.”
With the agility and swiftness of a ninja, Green manipulates a yo-yo from the basic vertical movement into a triangle, in which the yo-yo swings back and forth.
“When I was growing up we had Duncan Imperials and Butterflies. That was pretty much the yo-yo world. In those the string wraps around a metal axial. So the tighter the string winds up, the less it will spin. If it’s really loose then it won’t come back up, so it’s hours of frustration trying to get the string untwisted,” Green said. “But now you have yo-yos with a clutch system in it that makes it bounce back easily so it gets the initial frustration out of using a yo-yo.”
The variety of yo-yos range from classic Duncan to competitive yo-yos.
“Basically, yo-yos are skill toys,” Green said. “Skill toys teach that if you work at something hard enough, you can accomplish it.”
Along with Green showing off his yo-yo tricks to the tunes of Billy Jonas, a customer of The Toy Box may find 23-year-old employee Carissa Cryer playing with dolls.
“Sometimes when I’m setting up the doll house after kids have destroyed it, a little girl will come up and play dolls with me for a bit. It’s fun,” Cryer said.
Cryer recommends the Spirograph, a stenciling kit, and Playmobil to customers who want to stimulate their child’s creativity.
“The Spirograph is very mathematically precise. It gets kids to create beautiful designs.  When I was a kid I used the Spirograph to make my own stationary to write letters and make pictures for my mom to put on the refrigerator,” Cryer said. “Playmobil is another imaginative play toy. It doesn’t tell kids how to play. They can act out their own stories or they can mix dragons with the fairies and have them all be friends, or battle. Really, the kids are only limited by their imagination according to how they use it.”
Three-inch tall knights with tiny horses, crossbows and swords happily guard a Playmobil display of a castle from the threat of dragons. The smiles on their tiny round faces suggest they enjoy their duty.
“I like helping people find the perfect toy that will bring a little joy into their kid’s life,” Cryer said, smiling.
Meanwhile, Green maintains a boyish smile as he makes his yo-yo perform a trapeze act of circular motions around the intricate web of string he spun between his hands.
Then the yo-yo rises back into his palm where it rests.
“You can’t be around a kid having fun and not have fun yourself. It’s just impossible to do. They have a way of transferring that energy and enthusiasm to you,” Green said. “It’s wonderful to watch.”
The random plucks of the upright bass carry Billy Jonas’ heroic epic to its exciting conclusion.
The boy defeats the dragon with a paper cup. However, in his imagination, the paper cup becomes a magic hat which he puts on the dragon’s snout. He then proceeds to tie the dragon up with string.
The dragon begs to be released, but the boy refuses.
He has conquered the dragon.
Delete Image
Align Left
Align Center
Align Right
Align Left
Align Center
Delete Heading