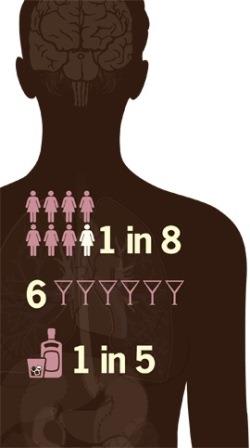 Photo courtesy of the CDC


By Katie Crooks, Arts and Features staff writer – [email protected]
10/28/2015
To encourage responsible drinking behaviors during National Collegiate Alcohol Awareness Week, various UNC Asheville on-campus organizations have partnered to create a four-day series of programs called Think Before You Drink Week.
“The whole goal is just to encourage our students to make responsible decisions,” said Barbara Galloway, a substance abuse counselor at UNCA’s Health and Counseling Center.
National Collegiate Alcohol Awareness Week is a student affairs initiative designed to be a collective effort in reinforcing university policy and promote alcohol education, according to the National Association of Student Personnel Administrators.
Strategically planned in the third week of October, these events help keep safe drinking behaviors on the forefront of student’s minds during the Halloween party season.
“Halloween is notoriously a big alcohol holiday,” Galloway says. “I would say to plan in advance, make sure you’re with friends, know how much you’re drinking, find a way to keep track of it, figure out how you’re going to get home so that you stay safe.”
The CDC reports that 90 percent of alcohol consumed by those under 21 is in the form of binge drinking. Holly Carter, a prevention specialist for the Partnership for Substance Free Youth in Buncombe County, says she warns those planning to consume alcohol of the dangers of binge drinking.
“The obvious is drinking and driving accidents,” Carter says, “but I try to focus more on other things that could happen, to folks if they are intoxicated. For example, sexual assaults, [approximately] 90 percent of those have alcohol involved, alcohol positioning is an issue on college campuses with binge drinking.”
The CDC defines binge drinking for men as consuming five or more drinks during an event, and for women, having four or more drinks on a single occasion. Carter says students planning on drinking should be mindful of their portion sizes, recommending students limit their drinks to 12 ounces of beer, 5 ounces of wine, or 1 ounce of liquor per hour.
“A good guideline for a special event is that you have no more than one drink per hour for up to three hours,” Carter says.
The last day of Think Before You Drink events included two driving simulations set up in the lobby of Highsmith. The machines are a part of a touring group which travels to high schools, colleges and military bases across the county.
Galloway says the Think Before You Drink Week is a collaboration between Student Activities, Involvement and Leadership, Health and Counseling and community partner Partnership for a Substance Free Youth of Buncombe County.
“It’s just raising awareness for responsible behavior,” said Toan To, assistant director of SAIL. “They have one simulator set up for texting and driving, and they have another one where it’s a drunk simulator built into a driving simulator.”
Delete Image
Align Left
Align Center
Align Right
Align Left
Align Center
Delete Heading