The future of the Ashe-Hole remains unknown 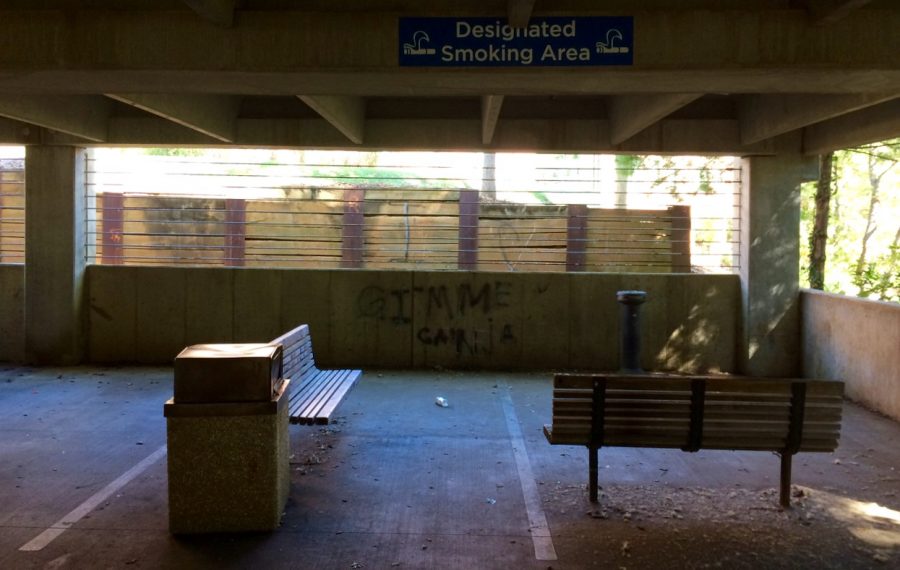 By Timbi Shepherd, Editor-in-chief
11/4/2015
A news article in last week’s issue of The Blue Banner featured the perspectives of students anticipating the administration’s removal of the popular smoking area in the Ridges parking deck.
The article sparked controversy in the UNC Asheville community. Students used social media platforms like Yik Yak to share their reactions to the piece. Some commented on the quality of the reporting, while others took a stance on smokers’ rights.
But, according to Student Affairs and the Student Government Association, the issue of the Ashe-Hole is presently a moot point, because officials say speculations about its removal are unfounded.
Bill Haggard, vice chancellor for Student Affairs, said a student brought the article to his attention on Wednesday.
“I just really couldn’t figure it out,” Haggard said, “because it went on and on about the outrage over closing the smoking area, and there was never a plan to do so.”
Administrative focus is on cleaning up the Ashe-Hole and increasing police patrols to cut down on illegal activity such as underage drinking, drug use and vandalism, Haggard said.
According to the campus crime log, there have been several reports of illegal drug use or possession and one report of civil disobedience in the Ridges parking deck since the start of the school year.
In addition to these concerns, Haggard said it is important to consider the detrimental health effects of smoking. He said it is a personal choice to smoke, but a choice that can have a negative impact on others through secondhand smoke.
“I think it’s inconsistent with our health and wellness values,” Haggard said.
UNCA goes as far as state law allows in its efforts to curb smoking on campus, he said. The school even provides a smoking cessation program to students who would like to quit.
“There has been a lot of research showing that policy change can affect behavior when it comes to smoking,” Haggard said. “So, as soon as the law allows, I expect the university will move toward a smoke-free position.”
Haggard said he feels most of the administration wants the campus to become smoke-free.
Mark Flack, vice president of SGA, said he sympathizes with the administration’s position.
He said he feels the arguments presented in the Blue Banner article misrepresented how the administration and SGA work to serve student interests.
“It is fine to criticize. It is fine to disagree. I disagree frequently with policies or proposed policies on this campus, but at least I am informed enough to give a fair critique,” Flack said. “Reading the article, I felt there was an enormous ignorance as to what goes on at the administrative level and the reasons behind certain policies.”
If the administration were to move the Ashe-Hole, Flack said it would not be an attack on substance use, but a measure to address more practical concerns. The Ashe-Hole takes up parking spaces and forces the university to pay to repair defaced property.
“People often say they have a right to smoke. I believe you do, but the university and the state have the ability to regulate the areas in which you exercise that right,” Flack said. “If officials were to create an area — this campus — where you couldn’t smoke, I would be OK with that.”
Flack said he sees no conflict between the students’ right to smoke and the university’s right to control where that takes place, and this applies to the Ashe-Hole.
“Personally and as a student, I feel they should move the spot,” Flack said.
He said his view does not necessarily reflect the views of SGA. SGA has not arrived at a unified position on the Ashe-Hole, Flack said, but the issue has come up in meetings.
“Conversations have gone both ways,” Flack said. “These conversations have been about what the logistics would be of moving certain smoking areas, and about exploring the benefits and consequences of that.”
Former SGA Freshman Senator Connor Colson, now a student at UNC-Chapel Hill, said he felt SGA’s conversations about smoking areas were more one-sided.
“There were a lot of SGA officials in favor of repealing smoking zones on campus,” Colson said. “The idea was that they’d be all phased out within the next couple of years.”
Colson said he is not a smoker, but he sees any attempt to curtail smoking areas as a threat to an established subculture on campus.
“The unwelcoming attitude toward smokers and the smoking subculture is a socially allowable form of discrimination,” Colson said. “It is totally against the ethos of Asheville, an ethos that respects personal decisions and personal choice.”
Colson said he would advise people to consider that smokers are invested in social gathering areas like the Ashe-Hole because they foster a sense of community.
“I don’t necessarily think smoking areas have to stay,” Colson said, “but they should be dealt with respectfully.”