The UNC Asheville women’s basketball team continued its winning streak Tuesday with an 81-42 victory over Longwood University. The win takes the Bulldogs’ record to 13-3 overall and 6-1 in the Big South Conference.
“I feel like we played really well in the first two quarters,” said Brenda Mock Kirkpatrick, UNC Asheville’s head coach.
The Bulldogs shot a blazing 66.7 percent from the field in the first half. Tianna Knuckles, a junior guard, hit three 3-pointers in a row and added a fourth as the team went 7-of-10 from behind the arc in the first half.
“Get my mind focused before the game, and getting extra shots up before the game really gave me more confidence,” Knuckles said. “Plus my teammates had my back and would get me the ball to give me more confidence as well.”
The Bulldogs combined their skillful shooting with a smothering defense that held the Longwood Lancers to 21.9 percent shooting from the field in the first half. The Lancers also committed 11 team fouls leading to 11 Bulldog points from the free throw line. Longwood struggled to a 54-17 deficit at halftime.
“Defense is our main focus, actually,” Knuckles said. “We have the mindset that defense leads to offense or transition points, and if we play good defense, the offense will come.”
UNCA finished with 26 points from turnovers and four off the fast break.
The Bulldog’s shooting cooled in the second half, and they finished with 52.6 percent from the field. Their defense remained aggressive and held the Lancers to 29.7 percent shooting for the game.
“I feel good about our effort. I feel good about our preparation,” Kirkpatrick said. “In this conference, you’ve gotta protect home court.”
The Bulldogs remain undefeated at home and will face Gardner-Webb on Saturday in Kimmel Arena. Gardner-Webb defeated nationally ranked UNC Chapel Hill in November.
“I told our kids, ‘we’ve got to have a short memory on this one,’”Kirkpatrick said. “We did a good job tonight, but we’ve got another one coming in on Saturday that is going to be really tough”
The Bulldogs play at 2 p.m. Saturday as part of a double header with the men’s team playing at 4:30 p.m.
“Hopefully on Saturday, with the doubleheader, there will be a little more excitement,” Kirkpatrick said.
Tuesday’s game saw a light turnout despite being the first after the beginning  of the spring semester.
“These women are having a great season and deserve the support,” said Hunter Scaggs, a sophomore at UNCA who attended the game. 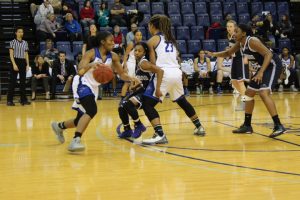