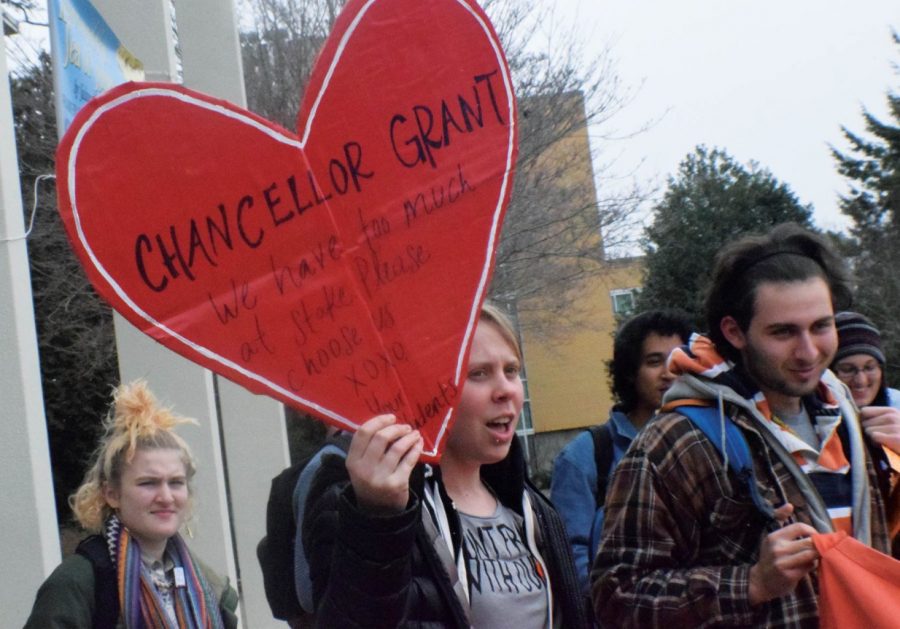 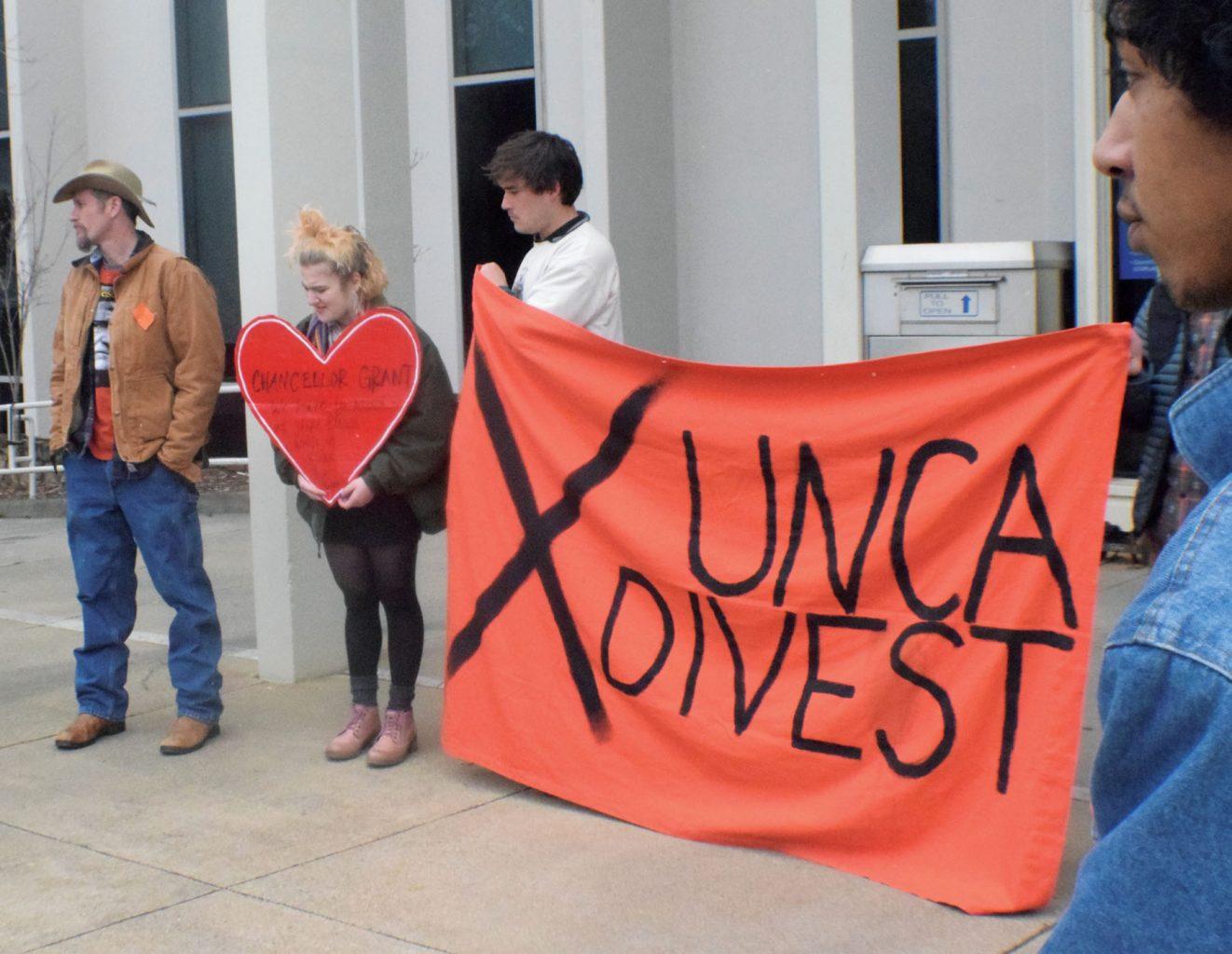 The UNC Asheville Divestment Coalition demanded to know which side the chancellor was on in the ongoing fossil fuel divestment debate.
On Friday, students marched to Phillips Hall to protest against the university’s continued investment in fossil fuels. Ashleigh “Rainbow” Hillen, divestment coalition member and a senior environmental policy student, said the entire UNC system has a $4 billion endowment invested in various forms of fossil fuel energy.
“We can’t just divest our money,” Hillen said. “We need to pull all the money.”
The Divestment Coalition set up a booth in Ramsey Library on Thursday, encouraging students to write “break-up” valentines to UNCA Chancellor Mary Grant. The authors of the valentines asked the chancellor to break up with fossil fuels, in honor of the upcoming Valentine’s Day weekend. Hillen said the creative approach helped catch the attention of students walking by.
Echo Bennink, a senior sociology student, wrote a valentine to the chancellor. Bennink said she believes reliance on fossil fuels is destroying the planet and she supports the divestment coalition because of their constant engagement with the issue.
“Their activity gives strength to their cause,” Bennink said.
The Divestment Coalition plans to expand even after their senior leaders graduate. Gardner Goodall, a divestment coalition member and senior environmental studies student, said the coalition has been actively trying to reach freshmen, as well as seeking to inform the campus community and motivate more involvement. He said it is going to take more people to make a change.
“There is something we can do,” Goodall said.
Erin Bridges, senior environmental studies student and coalition member, said the campus is mellow about activism. She said the activist community struggled to gain enthusiasm, but people respond more when they learn the university administration has not taken a stance on the issue of divestment.
“People in classes get excited about radical ideas,” Bridges said, “but when you get out on campus to have a discussion, people don’t know how to proceed.”
Bridges said more visibility is needed to increase campus participation. Ultimately, she said, climate change will affect all of us.
“We are going to ask the chancellor, ‘Are you on the side of the students or the side of destruction?’” Bridges said.
Hillen said the entire system is needed to make change effective, not just the student voice.
“The people at the university are inheriting the world,” Hillen said.
Goodall said he believes the university administration needs to choose which side they are going to stand with.
“The chancellor has a moral imperative to take a stand,” Goodall said.
On Friday, the Divestment Coalition and their allies met in the foyer of the library, this time to march to Phillips Hall to present their letters to Grant during her open house hours. Carolina Arias, a senior student and co-director of the Student Environmental Center, told attendees to treat the chancellor with respect.
“We’re asking her to be our champion,” Arias said, “we’re not trying to vilify her.”
The march began with chants and song, as members of the protest sang, “Whose side are you on,” demanding to know which side the chancellor will choose.
One chant said, “Roses are red; violets are blue; we hate fossil fuels, and Mary should to.”
Campus police waited silently in the stairwell as protesters spoke with the chancellor.
The students gathered in a circle and read their “break up” valentines to the chancellor. The notes expressed a desire for student voices to be respected. Some notes informed the chancellor there was no time to wait. Others asked the chancellor to use her power to create a change for good.
One student read an anonymously written note telling the chancellor to choose: “It’s us or them.”
The students were met with polite responses from the chancellor and administrators present.
Grant asked the students to continue using their voice.
“Thank you,” Grant said. “Let’s continue to talk.”
When asked if she could give an answer on where she stood, the chancellor said politely she has already done so.
“I’m on your side,” Grant said. ”What you’ve shared with me today, I will share with the Board of Governors.”
Hillen, who worked the booth in Ramsey on Thursday, said even if the chancellor gives a ‘No,’ there is still enough room to continue building a stance on this issue for the university.
“We need to change the dominant narrative,” Hillen said, “so the same people aren’t in power.”
Bridges said she is optimistic about the outcome from the event, but that change needs to happen soon.
“There is too much at risk for her to do nothing,” Bridges said.
Goodall, Bridges and Hillen all said they believe the Divestment Coalition and the student body have the power to make change happen.
“Never underestimate the power of student organizing,” Goodall said.
-Josh Alexander, News Staff Writer