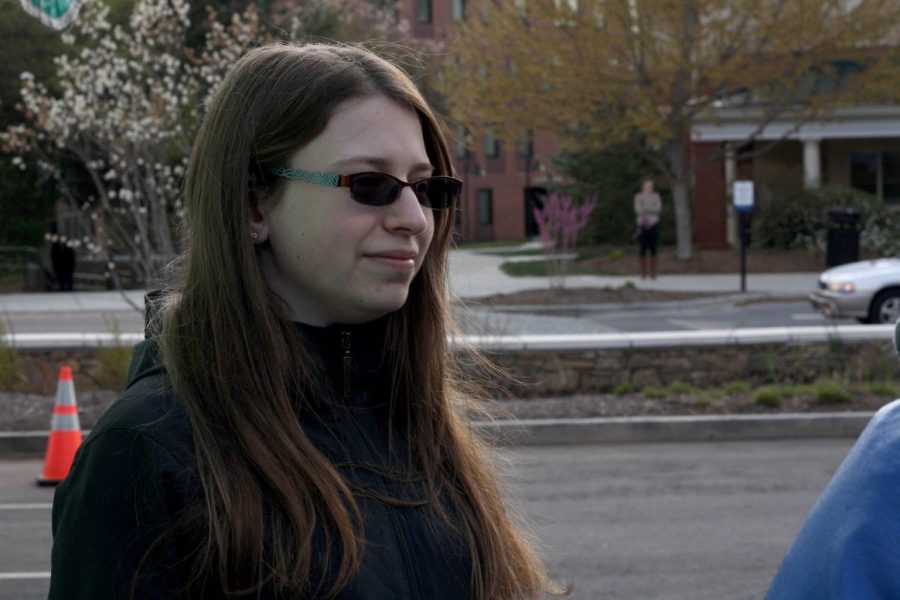 Lauren Taylor, 21, junior classics and biology student from Chapel Hill
What has your experience at NCUR been like so far?
“So far, it’s been amazing. Personally, I prefer the posters to the oral talks, but that’s because you have more time to stand there and take it all in and ask questions, whereas, oral talks, you just have 15 minutes to talk and five minutes to answer questions. So, it’s kind of rushed and you don’t always have a lot of background as to what they’re talking about. But I loved the posters. Some of them were just incredible. I learned a lot from them, and talking to the people that presented them, it was really informative and inspirational.”
That’s cool. What is the difference between the posters and the oral talks. It seemed like a poster meant a poster, like you take a poster and just stick it on the wall. That’s a pretty dense definition, but what is it?
“Okay, so the poster presentation is basically the same type of scientific poster you find at any university that’s presenting its research. So what it does is it presents the purpose of the research, the methodology of the research, the data acquired from the research, the discussion of the data, the conclusion plus references and thank yous and acknowledgements to the people and labs that they used.”

So, if you were to say a presentation that you found disappointing, would you cite any of them?
“Hmmm, I wouldn’t say any of them were disappointing. They were all very good in their own way. Some of them, I didn’t really understand because I don’t have a lot of background in them, and they — so I didn’t have a lot of background in the subject. So, you know, take any specialized scientist and put them in a field they’re not familiar with, they become a lay person.”

Ahh, yeah. That makes sense.
“So, none of them were disappointing. It’s just that some of them were less interesting to me than others.”

How do you feel overall the general response of the campus to this conference has been?
“I think a lot of people took advantage of it the way it was supposed to be. You know, people went to the presentations and I think they enjoyed it. I think it helped that teachers, some teachers, required you to attend some or others to do a writeup because that means you absolutely have to go out and do it. But then, once you go out there, you don’t just go to the presentation you have to go to. You see all the other presentations and you stop and you look around and I think the campus has responded positively to this opportunity to talk to students from other universities who have done presentations and to see what kind of research opportunities are out there and also, what kind of grad schools are out there and what they’re offering. Because, they had grad school representatives come and also the opportunity for the campus to show off our performing arts. I think they took advantage of that and everyone really enjoyed that, myself included.”

What has your experience so far at the conference been like?
“It’s been interesting. There have been a ton of people. I’m surprised by how smoothly it’s gone, though. I was expecting it to be a lot crazier, like doubling our campus population. I volunteered a little bit. My volunteer shift today got canceled so I’ve just been hanging out, haven’t done much. I came out to see the conferences and get some food. Whew. I’m tired.”

They did some bad things to the African-American community. That’s really interesting that there was a presentation on that.
“Yeah, it was really good. It was this girl from California. It’s crazy.”

Yeah, that people are coming from there. People came from Iowa, Texas, Cincinnati, it’s weird. Why? Why would you come to Asheville?
“Yeah. A lot of people are boycotting because of HB2 now. They’re not showing up.”

Yeah. Did you hear who?
“I don’t know exactly who all, but I know my boss went to some of the dance performances, dance lectures, I think, and there was only like one person out of the four that showed up.”

Wow. That’s — do you think that’s a positive thing or a negative thing?
“I think I am definitely opposed to HB2 and I totally understand where those people are coming from, but I know a lot of citizens of North Carolina are opposed to it as well, so it’s kind of too bad that our government’s decisions are hurting us as people. I totally understand where they’re coming from and would probably feel the same if I were coming from out of state, especially not knowing the people of North Carolina and the people of UNCA in particular.”

Yeah. So if you were to say the least interesting presentation that you went to or the most disappointing presentation?
“I don’t know. I only went to two and they were both pretty good.”

Oh, OK. Yeah, you were pretty selective about which ones you went to.
“Yeah, I’m just gonna go to some more tomorrow probably, a couple more of the literature ones, which I really like.”

Nice. If you were to say overall, based on your observations, the response of the campus community to this conference, what would you say are some things that you noticed?
“I think people are mostly pretty positive about it, especially with missing class. Yeah, of course it’s overwhelming to have this many people on campus, especially because if you live on campus, it’s like, ‘Where are we going to eat?’ But, other than that, I think it’s been pretty positive.”


What has your experience been like so far with NCUR? Has it been positive, negative?
“It’s been pretty positive. I’ve really enjoyed the poster sessions that have been going on here. I presented at one and so it’s been a nice experience getting really good feedback from people who are genuinely interested in your work.”

What was your presentation about?
“My presentation was on Afro-Peruvian music and jazz and their fusion together, and how that has impacted audience reception transnationally in Lima, Peru and New York City.”

Why are you interested in that particular topic?
“My family is Peruvian, so I grew up listening to Afro-Peruvian music and issues of authenticity have always kind of been at the center of that music since around the ‘70s, so it’s a concept I grew up hearing about through my parents and family members, and I’ve just been really interested to see the direction that Afro-Peruvian music takes and whether it’ll be absorbed into global genres or if it’ll disappear as a whole.”

So overall, in terms of your presentation, did you feel that people were eager to learn about it and engaging?
“Yeah, I got some really great feedback and commentary from both professors and students who were here attending, and particularly from one student here from UNC Asheville who was specifically waiting for me to get there and waiting for my presentation, so that was really nice.”

Yeah, you had a fan. That’s cool. Overall, what are your thoughts on the college and the city so far?
“It’s beautiful. Coming from New York City, there aren’t very many hills and trees and open space, so just being here and getting to breathe the fresh air and be around really nice people has been great.”