Internet creates an influx of challenges and opportunities for young students 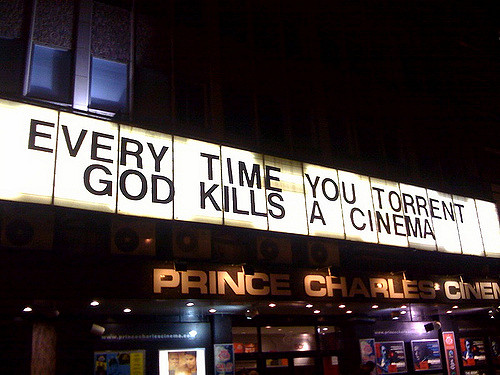 Torrenting has riled many an emotion in the 21st century, as evidenced here by a cinema marquee. Photo by Claire Rowland

Sarah Forshey
Contributor
[email protected]
The Recording Industry Association of America represents much of the music industry when it comes to piracy laws. They assist several big record studios and seek to protect artists’ intellectual property, but RIAA monitoring and copyright laws affect illegal music downloaders, many of whom are students.


Tyler Long, a junior music technology student, said he experienced the impact of copyright laws firsthand.
“I got caught a few years ago at NC State for illegal music downloading,” Long said. “I  got sued for $250 per song and finally had to settle out of court for $5,000.”
According to a recent study by Frontier Economics, U.S. Internet users annually consume between $7 billion and $20 billion worth of digitally-pirated music.
“Being a musician, I think music is for the people,” Long said.

Musicians do not make a lot of money from music sales, Long said. They earn most of their money through merchandise and ticket sales.
According to the Institute for Policy Innovation, piracy harms the intellectual property owner, who loses the revenue they would have been gained had the legitimate recording been purchased.
Despite this, Long said people should not have to pay for music, especially if used for educational purposes. He said he uses websites such as Spotify and YouTube to discover new music.
Melodie Galloway, associate professor and head of UNC Asheville’s music department, said music belongs to the artist. If people want the artist to continue creating content, that music should be paid for even if used for educational purposes.
According to the official RIAA website, downloading one song might not seem bad, but the accumulation of many downloads costs artists thousands of dollars.
Tyler England, a sophomore English student, said making music available online should be up to the artist. Typically, artists who do not have their music available online have no need to do so, as these artists are already well-known.
England said he does not illegally download music. He said he does use Spotify, though, because the artist can decide whether or not they want their content on the site.
Long said sites such as Spotify or YouTube are helpful resources for small artists, and provide a good way for artists to get their content heard.
Galloway said while these sites help artists get noticed, young artists need to be careful. Copyrighting content is the best thing a young artist can do to protect themselves.
“You can’t control how art moves through the internet,” England said, “because you can’t control the internet.”