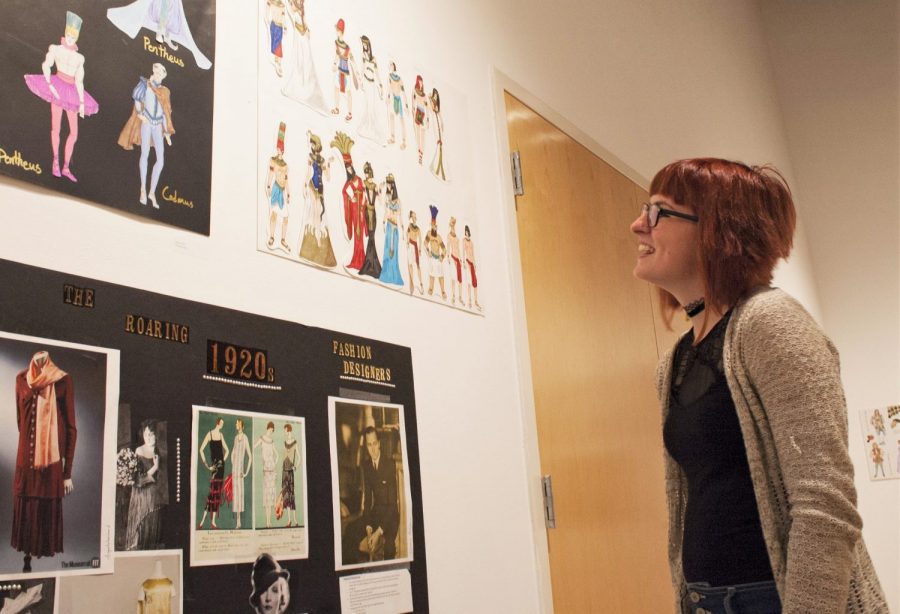 
Karrigan Monk
A&F Staff Writer
[email protected]
UNC Asheville is hosting the Costume at the Turn of the Century, 1990-2015 exhibit curated by visiting professor of drama, Igor Roussanoff. As part of the exhibit, several students and alumni have their work on display in the Highsmith Art and Intercultural Gallery.
Lilyth Hinson, a senior drama student, had the opportunity to work with Roussanoff as he brought this exhibit to Asheville from its starting point in Russia. She called him intense, but noted his dedication to his art and field. She said it was really nice to experience working with him as a broadening experience to prepare for the professional world.
Although each designer uses a different system, Hinson described the basic method.
“For costume design, you’re typically assigned a play that you start thinking about. What you do is think really hard about each character and what would characterize them in clothing and then you think of a time period or a costume period,” Hinson said. “So you take a character, you associate them with something in your mind and then you draw until it feels right.”
The gallery features several dresses, a three dimensional model as well as costume designs lining the wall. The pieces are from students from the past few semesters as well as a few alumni who were involved with costume design while attending UNCA and bringing the exhibit to campus.
Caroline Dischell, a senior drama student, displays her 3-D The Bacchae costume designs in the center of the room.
“I did kind of a take on late 18th century France and then I really deconstructed it,” Dischell said on her designing process for the piece. “I put springs and slash work throughout. I tried to really make The Bacchae into something that they could have their style of the time and put skins on it and destroy it.”
Although many of the designs lining the walls are from the Art of Fashion course open to all students, most of the pieces come from theater students or those who are actively involved in the theater department.
Ginny Shafer, a junior health and wellness student, is highly involved with UNCA’s theatre department with her minor and as a cast and crew member in many shows. She also displays work in the gallery.
Shafer describes her take on the opera La Traviata as runway avant garde with Greek influence. Although her costume design was only for a class and not to be constructed, she said she was sure to keep the costumes realistic in terms of how they could be put on and taken off and doing research to ensure historical accuracy.
Each designer had different inspirations and goals for their work. Dischell said she likes to put a twist on the already existing world.
“I like taking what we know and changing it and playing with something not entirely avant garde,” said Dischell, “but taking elements of the avant garde and bringing it into a time period that already exists.”
The student and alumni exhibition is free and will be in the Highsmith Art and Intercultural Gallery until Sept. 28, open every day until 6 p.m.
Delete Image
Align Left
Align Center
Align Right
Align Left
Align Center
Delete Heading