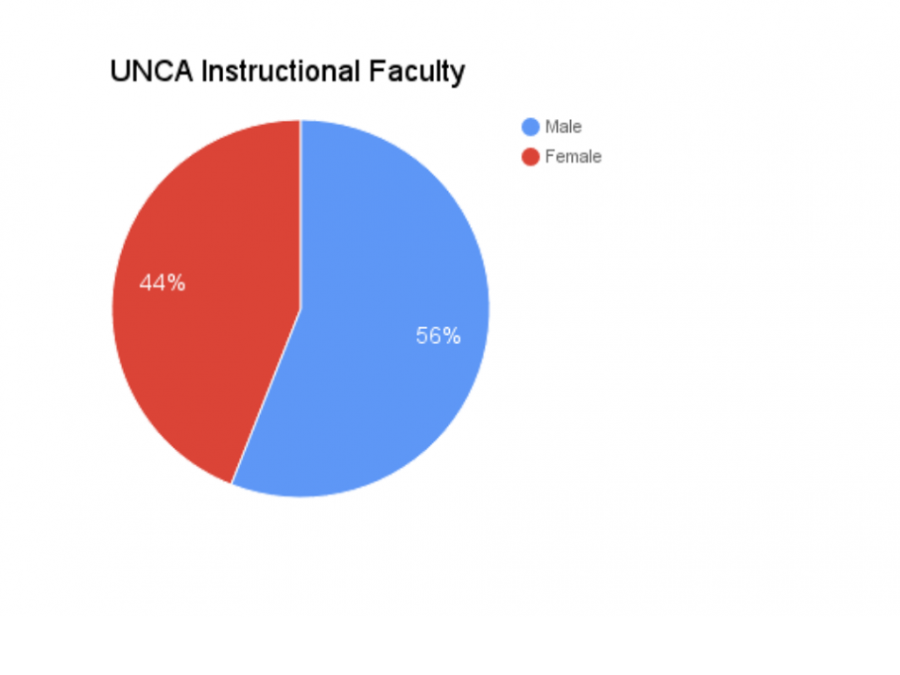 Catherine Pigg
A&F Staff Writer
[email protected]
Despite females making up more than half of the student population, the majority of instructional faculty at UNC Asheville are male at 56 percent, according to UNCA’s factbook.
“I think in general there is a culture that, ‘oh yeah math is for men,’ but it’s not really true. Some of the best mathematicians I know are women,” said UNCA  professor Dave Peifer, who holds a Ph.D. in mathematics.
According to the Princeton Review, more parents of boys said their child’s favorite subject is math, even though both boys and girls equally choose math as their favorite subject.


“I think that the scholarship in gender studies has shown us that a lot of the tendencies that we think of as being basic or natural or essential, are actually not natural. But instead socially constructed,” said lecturer Grace Campbell, who teaches a course in women, gender and sexuality studies.
The number of women entering the predominately male disciplines of science, technology, engineering and mathematics (STEM) only recently started increasing, according to the National Science Foundation.
“I think one explanation is that parents who show themselves to be more likely to name math as their son’s favorite subject may well be just sort of inadvertently replicating some beliefs they have, some unexamined beliefs, about boys being better at math,” Campbell said.
Women make up 47 percent of the total U.S.  workforce, but are significantly less represented in particular science and engineering occupations, according to the U.S.  Department of Labor.
“I think if you look nationally there’s a good amount of women in mathematics at least. This school, I’m not sure if our numbers are exactly there, but we have a lot of women in the math department as well as men,” Peifer said.
According to Peifer, UNCA sent women in the math program to both the Carleton Program and Princeton program for women in mathematics during the summer.
“There’s a couple programs specifically, there’s ones for minorities and women to get them into the sciences and Carlton College has a program for undergraduates, but you would go there for about a month and take classes over the summer. And they’re promoting women into the mathematics,” Peifer said.
UNCA  offers more than 100 courses, with  a portion of these courses falling under STEM. An average class size is 20 students, according to UNCA’s facts and figures.
“There’s usually only like four females in a class, if that, sometimes five in a whole class. So yeah there’s a whole lot of males,” said Chelsea Childers, a student in computer science and new media.
Men holding a STEM degree will be more likely to occupy a career in STEM than women, according to the U.S. Department of Commerce.
“The current state of gender distribution in the undergraduate student body is pretty new. It hasn’t been that way for that long and there are a lot of people who make up the professoriate who are older than that,” Campbell said. “ In other words they’ve been around for many years and they predate that demographic shift.”
Female instructional faculty members increased by 4 percent since 2011, according to UNCA’s factbook.
“And so combine that with another fact which is, historically, it is widely known that female faculty members have not found academia just generally to be as open or welcoming as men have,” the women, gender and sexuality studies lecturer said. “Now that’s changing, but I think those changes are, again, new enough that you just haven’t really seen the difference.”
Delete Image
Align Left
Align Center
Align Right
Align Left
Align Center
Delete Heading