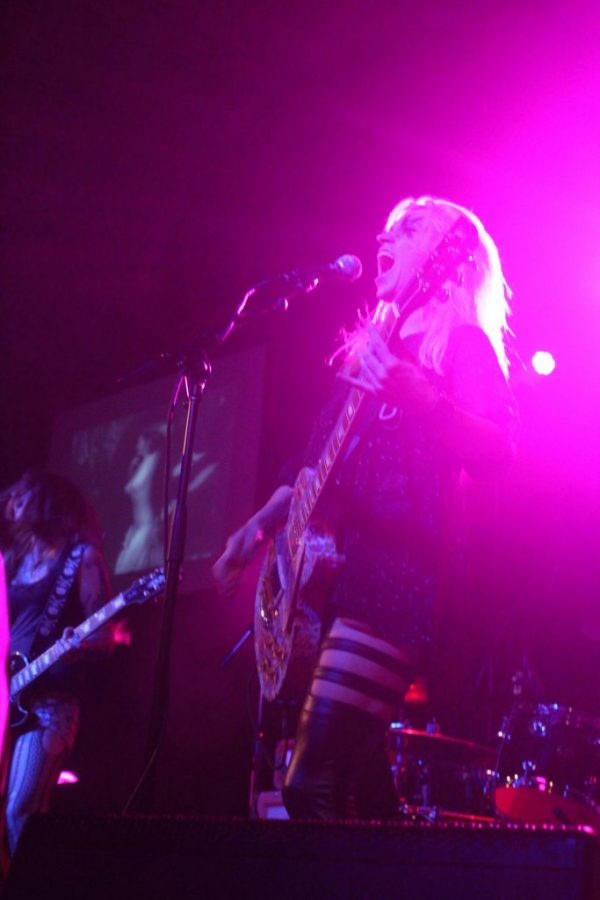 Lead singer of The Dead Deads, Meta Dead, screams into the microphone during the band's set at the Orange Peel on Sept. 14. Photo by Phillip Wyatt.

Karrigan Monk
A&F Staff Writer
[email protected]
The Orange Peel fills with what looks like stereotypical hard rock fans. They are most likely here to see the headlining band, Chevelle, an all-male group. Before they play, two opening acts will perform. One is another all-male band. The other is different.


Five women walk onto the stage as an audience member shouts, “It’s girl power! I love it!”
The women take their places, each playing an instrument. As the first song begins it becomes evident these women not only belong on this all-male ticket, but also in the hard rock world.
They are The Dead Deads, a name reinforced by the Xs painted over their eyes.
The Nashville-based band runs through their set list and by the end, each and every audience member nods their head along with the music, holding up a rock sign as the band takes a picture after their final song.
The band consists of guitarist and lead vocalist Meta Dead, drummer Billy Dead, lead guitarist Betty Dead, bassist Daisy Dead and keyboard player Hella Dead. Billy, Betty, Daisy and Hella all provide backing vocals as well.
Four of these members are dressed in all black, with the exception of Daisy Dead, who wears a light colored dress with a daisy in her hair.
All five members seem to thoroughly enjoy themselves throughout the show. Daisy and Billy are nearly always smiling as Hella jumps through the entire set. This is not just a job for them, they are having fun.
Even though they are enjoying themselves on stage, the band remains incredibly tight, sounding as good, if not better, than their studio recorded albums.
“Thank you for showing up on time to a rock show,” Meta says after their second song. They may have only played two songs, but they have already captured the attention of the previously chatty audience. Every eye in the house watches as The Dead Deads continue their set.
Behind the band, black and white visuals, most from old films and television shows, play across two projector screens. Meta describes them as some of the bands favorite things and references them throughout the show.
Old favorites like “Nope” and “Lemonade” are played alongside newer tracks like “Blackout.”
“We really like aliens and space,” Meta says between songs. “All of our songs are love songs, but they fall into the sci-fi category as well.”
Meta perfectly describes the sort of heavy-rock-with-a-twist-of-intrigue they play during their set, a mix of songs from their newest album, For Your Obliteration, released in August, as well as tracks from their debut album.

Through the haze of multi-colored lights, the band head bangs in unison, with Meta being particularly vigorous and often balancing on one foot as she plays her guitar and sings.
An enormous cheer erupts as Meta tells the crowd she has always wanted to play at The Orange Peel.
Perhaps the loudest audience reaction from their set comes when Meta growls and screams into her microphone, setting off a deafening cheer from the crowd. If anyone in the audience was wondering why five women in their 30s were on stage singing hard rock songs, any doubt is erased in this moment.
“Much love! You guys have been amazing!” Meta exclaims as she closes the show after taking a picture with the band and audience for Instagram.
The crowd cheers and claps as The Dead Deads pack up their equipment and head to the merch table where they meet fans and sell and sign their merch. They take no break, they move from stage to selling seamlessly as if this is what they have always been meant to do.
The Dead Deads may only have two full-length albums out, but their incredible live performances and attitudes toward their fans point to a long and successful future.
Delete Image
Align Left
Align Center
Align Right
Align Left
Align Center
Delete Heading