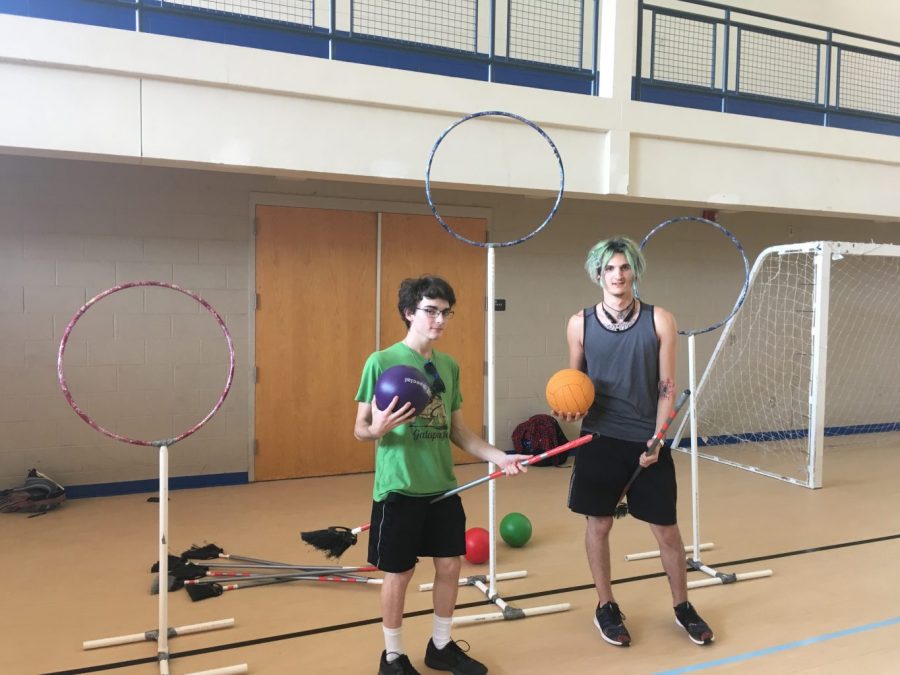 Cassidy Fowler
Sports Staff Writer
[email protected]
“Why do I play quidditch?” said Nathan Lasala, junior biology student from Raleigh. “It’s weird, it’s fun and it’s great exercise!”
UNC Asheville’s club quidditch team is the real-life version of the game played in the Harry Potter books and movies, also known as Muggle quidditch.
“We play with brooms between our legs and with balls from sports like volleyball to represent the real quidditch equipment,” said Lasala, team captain and coach.
Muggle quidditch is played with five balls. First is a quaffle, or a volleyball, then there are three bludgers, or dodgeballs, and one snitch, which is a tennis ball inside a knee-high sock.
US quidditch rules state the snitch is worth 30 points and its capture ends the game. If the score is tied after the snitch catch, the game proceeds into overtime.
The game is played at UNCA with six players on the field at a time: three chasers, one keeper, one beater and one seeker. US quidditch rules state seven players are used: three chasers, two beaters, one seeker and one keeper.
Lasala said only seven players regularly attend. With him as the coach, it is best to keep it at six players for now.
“Because the team is relatively fresh, we’re all still learning and growing as players,” said Lasala. “Last year we didn’t have many practices and not many steady participants.”
Joseph Clay, a senior quidditch player from Monroe, said he is excited about how the team grew this year.
“Last year I only went to two practices,” Clay chuckled, “but that was about half. This year, we have regular practices held on Tuesday or Wednesday.”
Delaney McShane,  an 18-year-old freshman from Charlotte, said he hasn’t played very long, but this is the first official quidditch team he’s ever been a part of.

“It’s fun playing on the quidditch team,” said McShane. “I’ve been on other sports teams in the past and it’s kinda like being on those, but personally it’s a lot more fun.”
McShane said he is excited to grow with the team, as he has seen each player become more athletic over time because of drill exercises and the upbeat pace of the practices.
McShane also said the team incorporates some well-known practice games, such as SNITCH, adapted from the game HORSE from basketball, in their routine to advance in skill and follow the lead of other quidditch teams across the world.
“Quidditch is a well-known sport,” said coach Lasala. “Over 100 teams exist around the world and hopefully one day we’ll be able to compete against other universities.”