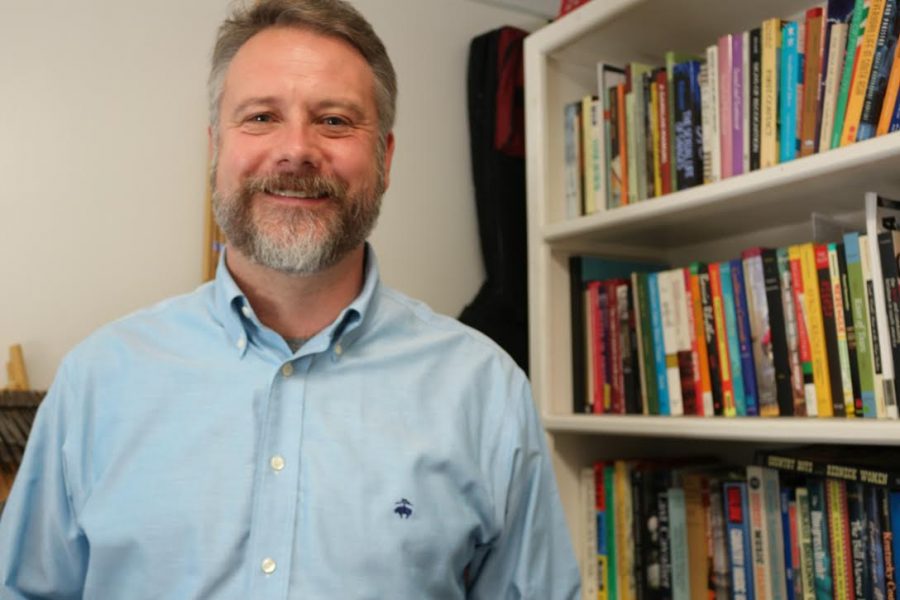 Twanging melodies of mandolins, banjos and fiddles summon autumnal visions of mountain roads and southern homes for many Western North Carolinians.
For Toby King, an assistant professor of music, bluegrass paved a much farther route than the Blue Ridge Mountains reach.
“We went to Tokyo, Osaka, Nara, Kyoto and settled in Matsuyama,” said King, who appeared to scan through a dozen adventures in his mind like a flipbook before ending on the southern Japanese destination.
King, who mastered almost every instrument associated with bluegrass aside from the fiddle, will share his experience with bluegrass in Japan as the inaugural lecturer for UNCA’s fall music series starting Sep. 27.
A Skype chat with his bluegrass-jam-attending friend, who lives in Matsuyama, initially sparked King’s desire to travel to that region.
“I realized I had nothing scheduled in June so I found cheap tickets and we went,” King said.
This is where King and his wife found themselves one summer night in a sudden limelight at a Matsuyama jam.
“The place was packed because everyone heard some people from North Carolina were going to be there,” King said. “We, my wife and I, were immediately put on stage and we just started picking.”
“Blue Ridge Cabin Home” was the song and according to King, the whole crowd joined in to sing the chorus. After the impromptu performance, they were asked to play for a local benefit, drawing King into a musical community that played together every week.
“It is such a welcoming community,” King said, before recounting a late night spent with new friends around the low table of a Sake bar. “We played until about a quarter ‘til four, eating sushi and picking.”
The Japanese bluegrass scene began as a small, passionate group in the 40s that bloomed into a larger community by the 70s, according to King.
“The illusion of bluegrass is that it seems very straightforward, very honest,” King said.
Perhaps this explains why bluegrass has the ability to resonate across the world, according to King. Something subtle about the effect of these tunes escapes description and evokes, in many instances, a deeper connection to community.
“It caused me to think, ‘is there something about bluegrass that causes this kind of connection? What makes it transplant? Is it just like Kudzu? Do you just plant it and it takes over?’ My talk is going to be about the nature of this interaction,” King said.
King rekindled a fondness for the genre while studying geology at the University of Montana. Far away from Appalachia and with an outsider’s ears, he approached bluegrass as a type of world-music.
Currently, King holds a Ph.D. in Ethnomusicology from Columbia University and directs the Traditional Bluegrass Ensemble at UNCA.
“The two main reasons I auditioned for Bluegrass the first time are that I already played bass and a little mandolin — although I had no prior experience with bluegrass — and that Toby King was the director,” said Nick Cameron, a music technology student.
Cameron is primarily a singer and mandolinist in the Bluegrass ensemble.
“Honestly, bluegrass is just a lot of fun to play, once you can get up to speed,” he said.
Cameron said he has been involved in all of King’s ensembles since the director’s arrival at the university in 2014.
“Bluegrass is relevant for a couple of reasons,” said the senior. “For one thing, it is still a thriving community in music and for another thing, as an older genre, it is an important and well-preserved artifact of the evolution of music today.”
Evan Harris, a senior and music technology major, is a dobro player for the ensemble.
“I have always wanted to learn bluegrass,” Harris said, noting his reason for joining the group.
Both students said they will attend the music series this week.
The modern relevance of bluegrass lies in the fact that it continues to be played, according to Harris.
“There are lots of bluegrass players and many new, great bluegrass bands,” Harris said. “It’s fun mountain music.”