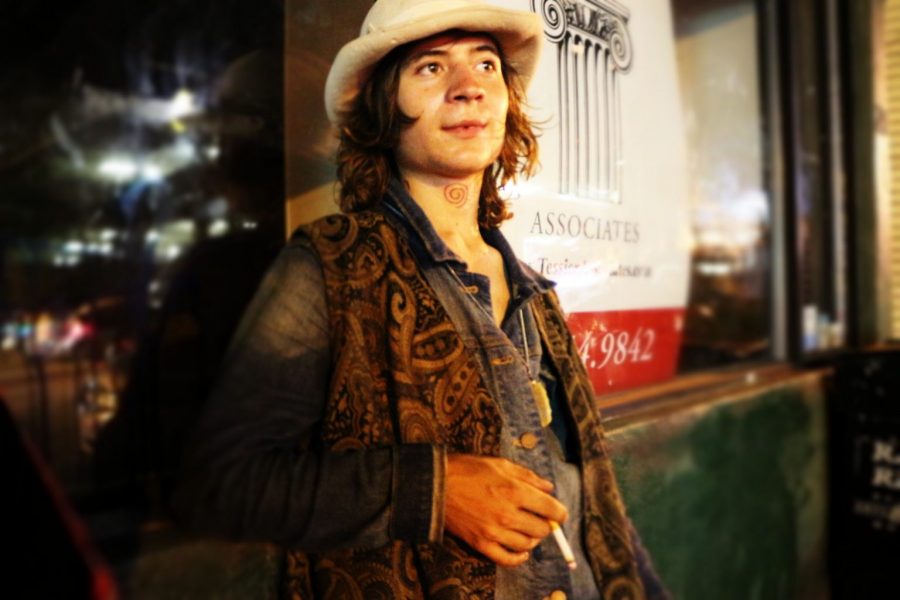 Aidan Bryant is always searching for his purpose in life. Photo by Erika Williams.

Aidan Liam Bryant, hitchhiker originally from Los Angeles
“You gotta soften ‘em a bit. You gotta soften these people a bit, you know? They like walking around with these shoulders all chipped and up all tall and fucking with people for no reason at all.”

How old are you?
“I am old enough to know better, yet, at the same time, I’m a young man. I don’t want to say exactly how old I am. When you say how old you are to anybody, no matter where they are consciously in their minds, it brings a certain kind of assumption of that human being upon you, just because of their age. Either they think that you’re very enlightened for your age or they think they understand who you are as a human being and they understand you, but they think that you’re not up to par with who they are because of how old they are and what they’ve been through in life and so, I don’t like telling people my age because it brings boundaries up. It brings walls up, you know what I mean? But I am a young man. I’m very young.”

What would you describe your profession as being?
“My profession, oh wow, that’s quite the question. So my profession, what I do for a living right now, is I hitchhike around the country and in order to fulfill my destiny as a human being because I have been destined to do this, I have to be at my utmost and I have to do my best to be at my utmost and right now, I’m trying to get beer. I’m trying to get alcohol. But, the way that I’m going about it, I’m bringing light to people’s lives. I’m making people smile. Yeah, I might make you feel a little uncomfortable because I’m this random kid coming up to you asking you these questions on the street, but guess what? Deal with it because everybody here, everybody has a story and so when somebody comes up to me, no matter what their question is, whether that question is your guys’ questions, you want to interview people on the streets, or whether that question is, ‘hey, I really need some beer. Can you help me out?’ no matter what the question is, you have this certain understanding of human beings. You have this love for humanity. It’s really what it comes down to and so, that’s what I’m out here doing. If I need beer, which I don’t drink beer often because I’m not an alki and no, I don’t drink every day and no, I don’t shake and bake in the morning. I don’t get the shakes, not gonna die. I drink here and there once in awhile and when I do drink, this is how I have to go about it because this is the lifestyle I live. I live a lifestyle where I don’t have any money. The money that is given to me, or the the money that I ask for, I use on food. I feed my dog all-organic dog food so my dog eats really well and that’s expensive to do, you know? It costs a lot and so, I have to ask people and the majority of the time, this is the thing, as a traveler myself, I don’t ever have to ask for anything. When I’m out on the road, when I’m hitchhiking across the country, everything is blessed. Everything is given to me. I don’t have to ask at all. But when I settle down in a city and this is something that I really want you to hear right now because this is something that people really need to understand. When travelers like myself settle down in a city, it’s a lot harder to just sit there and be your interesting self and get a blessing from people because people have a stigma in their mind. They have a certain assumption of individuals that sit on the sidewalk in general, just because of how the city is.”

Yeah, exactly.
“Just because there’s homeless people in the city and there’s homeless people asking them for money every day and so an individual like me who actually, not that these people who live in these cities, not that these people who are on the streets, not that they don’t have potential, not that they don’t have something, not that they aren’t just as good as me because I’m no better. But the thing is, the life that I’m living, this is the means to an end. I’m not going to be hitchhiking around the country all my life. I’m doing this in order to make the connections I need to make in order to do what it is that I truly love for a living, which is dress rock stars. It’s all kinds of different things I want and so this is the kind of life that I have to live in order to do that and I was destined for this life and then there’s so much more to it. There’s philosophy behind hitchhiking. There’s a certain ideal that you can carry while hitchhiking that can be so philosophical. I mean, the first time I ever hitchhiked, I hitchhiked with a 56-year-old man and he was a Buddhist monk and what he told me is that often your ride needs you as much as you need them and, oh my gosh, I’ve had that come to fruition in my life like no other. I’ve cried with grandmothers. I’ve cried with pregnant women in their car about their issues in their life. I’ve had very, very intense experiences through hitchhiking, through throwing my thumb out and knowing, having faith, that there was something beyond me that was going to bring somebody to me, that they were going to feel a certain feeling in their heart when they passed me that told them, ‘hey, turn around and pull over and pick this kid up.’ So, I don’t know if this is exactly what ya’ll were lookin’ for tonight.”

Yeah, this is great.
“But, this is a viewpoint that very few travelers carry. This is a viewpoint that was carried very much so through time and history and is to a certain extent, this is the way that monks traveled, but it was less resistance. The way that monks travel when they traveled is that they carried a little bowl and they carried a little rucksack and that’s it. They just walked. They didn’t hitchhike. They didn’t do none of that. They just walked. But they knew that there was a source out there that was going to watch over them, that was going to bring certain emotions upon certain human beings in order to help them survive, in order to help them live and this way of life, what’s so unique about it, what’s so beautiful and so amazing, is how you get to let go of so many materialistic things and through that you let go and you break down walls that have been built up around your psyche all your life and you start freeing yourself and that right there is what life’s all about. It’s becoming as free as ascending in consciousness as much as you possibly can, being the best that you can be.”

So if you were to say you have a personal life motto, what would it be and why?
“My life motto is to do whatever it is that I was destined to do on the face of the planet, to do whatever reason I came here for, the reason that is so much bigger than my mind could possibly ever fathom. Whatever it was that I have existed to do, I must do. I must do my best to find out whatever it is that I have to do and so that is what I am doing. I’m doing my best to figure out why I am here right now and that is my motto, is to do my best, to be the best human being I can possibly be in order to figure out why it is that I exist on the face of the planet right now.”

So if you were to say one of the most intense experiences you had while hitchhiking, one that sticks out in your head particularly, what would it be and why?
“You’re going to have to give me a moment to think about this. I have a lot of stories. Okay, so one that really sticks out and it’s recent, it’s very recent, is I was hitchhiking outside of North Hampton, New Hampshire, or Hampton Beach, New Hampshire is what it’s called and this man picks me up and he drops me off at the gas station and he tells me, he says, ‘hey, if you want to, you can come back to my house. I’ll give you a shower,’ you know, this and this and that. Well, I go back to his house at 12 o’clock, which, is, you know, the time that he asked for me to come down there and I go back to his house and I meet his wife and I meet his child and I end up staying there for three days and the light and the love that I brought into that house, eventually, from what he told me, he said this to me, he said, ‘what you brought into my household saved my marriage.’”

Wow.
“Him and his wife were on very, very crucial terms. They’d been together for 20 years. They were beginning to be bored with their lives. He had just lost his job because he was tired of working for these crazy people from Albania that owned the Greyhound and he quit his job and so he didn’t have very much money saved up and his wife was giving him shit for it and, you know, he was going out and doing his best to get work and so, he wasn’t spending enough time with his wife and all these different things were happening and the light and love that I was able to bring into the household, myself, when I came in there, what I was able to do for them, even though they were doing so much for me, they gave me a brand-new pair of cowboy boots, they gave me money, they fed me, they gave a place to lay my head at night, a comfortable bed — ”

Like a Tom Waits song.
“They gave me so much, exactly and so, it was kind of mutual. What I was able to give to them, what they gave to me, I was able to reciprocate, unintentionally, without even realizing, which is doing my best to lift their spirit.”

How would you describe your style?
“When I was younger, it was flashy. Now, practical, aesthetically practical.”

Aesthetically practical. So if you had a life motto that you lived by, what would you say it would be and why?
“That’s really hard. I don’t keep a motto in general. Shit. Fine, it’s from Bruce Lee. It’s ‘do not pray for an easy life, pray for the strength to deal with a hard one.’”

Yeah, so, you were a psychology major at UNCA, right? Do you have any creative influences that inspire you or just influences in general?
“Besides Belle & Sebastian, let’s see, Ansel Adams.”

Why Ansel Adams?
“He was my favorite photographer.”

Ah, ok. You like landscape photography.
“It’s not just necessarily landscape. It’s just the way that he always never tried to make it abstract. It is what it is. This is fucking horrible. I should not be having an interview right now.”