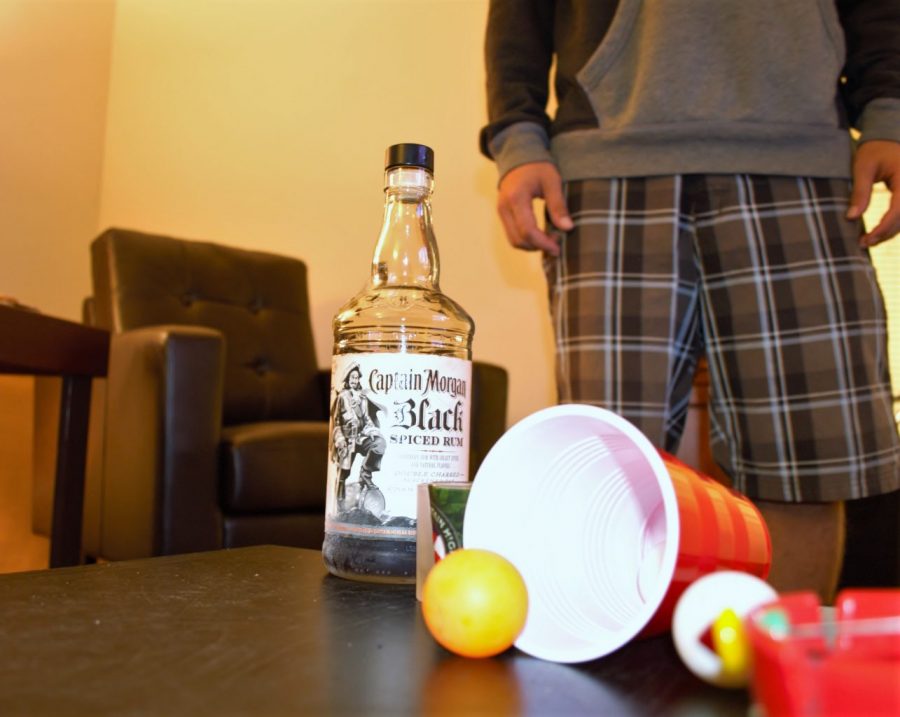 Liquor pong is a popular game at student parties, despite the fact it could result in alcohol poisoning. Photo by John Mallow.

Nicholas Strauss
Contributor
[email protected]
Every year, students choose to take part in social activities that can cause them more harm than good, according to Barbara Galloway, a substance abuse prevention educator and counselor at the UNC Asheville Health and Counseling Center.
“Partying on a Thursday night often means missing class on a Friday,” Galloway said. “It can cause students to fall behind, especially if they’re partying on a weekend and recuperating Sunday instead of studying.”
Drinking often spells trouble for underage patrons, as alcohol regularly appears at privately-organized functions, according to frequent party host Patrick Davitt, a UNCA sophomore.
“A party of mine was busted last year. I ended up with 10 hours of community service and a fine to pay,” Davitt said. “We were drinking like we would at any party, listening to music and having fun, until the RA came and busted it up because of the noise. Once he opened the door, he saw beer cans and everyone who was present got citations.”
Off-campus parties pose an even bigger risk to patrons. Students often experience brushes with law enforcement, said sophomore Kristina Rupp.
“I’ve been to a few parties where cops showed up,” Rupp said. “Each time I was nervous because I could’ve absolutely gotten in legal trouble. Luckily I’ve never had to directly interact with them.”
Galloway said misconceptions about the role of parties and their importance can hinder students who are trying to fit in with their peers.
“There are people coming to college with certain ideas of what a typical student’s life is like,” Galloway said. “For instance, there are myths about how everyone in college likes to party or that everyone at UNC Asheville smokes weed. A big one is that everyone in school drinks at parties.”
Galloway said college allows for a degree of freedom not found in home life.
“If a student believes the myths about partying and ends up using drugs and alcohol, they may be more inclined to go in that direction with their life. It’s habitual patterns that become the big problem,” Galloway said.
The success of many college students relies on balancing their studies and leisure. If left unchecked, frequent social activity can negatively impact scholastic enthusiasm, said Nick Cohen, a student suspended from UNCA due to poor academic performance.
“I was at UNC Asheville for a semester and it didn’t go so well,” Cohen said. “I’m actually on academic suspension, which sucks, but I will be back. I didn’t go to many big parties, but I put social activity before my classes and schoolwork and that caused me problems.”
Despite the dangers, many college students consider partying a necessary part of life. Davitt said partying releases energy and stress.
“For me personally, partying is a necessity. My friends and I party to get our minds off classes and just have fun,” Davitt said. “I’ve hosted 10 or so since I’ve been at UNCA. Five of them I’ve hosted just this semester.”
Rupp said experienced partygoers benefit from paying attention to their habits and not going overboard.
“If I go out too much, I get exhausted and schoolwork can become overwhelming,” Rupp said. “It can be a lot to handle, but once I get in my groove I know I can manage.”
To avoid many of the issues with parties, it is advisable to have a plan and to bring dependable friends, Galloway said.
“Make well-informed decisions with friends before going out, especially about what you put in your body,” Galloway said. “Maybe try partying sober.”