The Growlers bring The Orange Peel into their midnight reverie 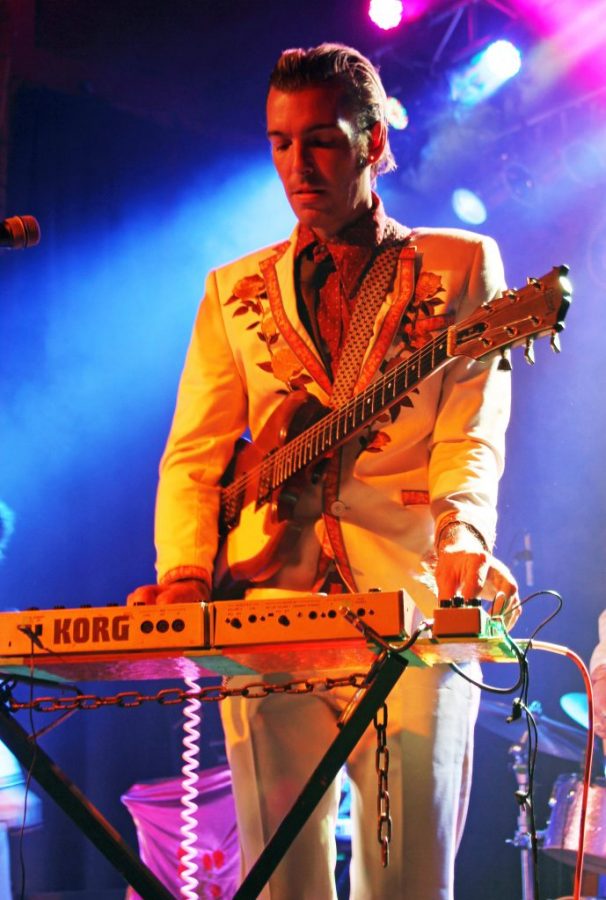 If there were a tango scene in Pulp Fiction, The Growlers would be providing the soundtrack.
The self-described “Beach Goth” rockers ebbed into the Orange Peel on Wednesday night, bringing their trademark wavy, pulsing rhythms and danceable beats to Asheville.
The crowd, composed mainly of fresh-faced 20-somethings, greeted the California-based rockers with uproarious applause, squeals and shouts as they appeared on the stage.


Fresh off of the release of their latest album, City Club, the band arrived dressed in gaudy white tuxedos with pastel prints, innate embodiments of a distinctly hipster Wild Wild West.
“Finally a new record is out there in the world,” cheered lead singer Brooks Nielsen before launching into the set. The setting was typical of their midnight diner aesthetic, with a neon sign reading “City Club” beginning to pulse against the backdrop of the surf-wave infused guitar solos. The photo in the background depicted a desert with a lone building, with the band’s name on a neon sign above the building.
Nielsen, donning a denim shirt, starch-white pants and a red studded belt, blew kisses into the microphone and flirted with the crowd in a saucy manner, shaking his hips all the while. Some members of the audience, however, felt that he wasn’t as dynamic as the songs he sang along to.
“They looked really stiff, but they were funky as hell. I’ll give ‘em that,” said David Swansea, a bartender from Asheville. “How can you move so stiff, yet be so funky?”
The Growlers’ aesthetic is one of existential angst and they provide the perfect soundtrack for the yearning, post-pubescent youth of the Millennial Generation.
“This city’s shrinking down. I think it’s time to leave this town, pulling out while there’s still time, littered all my memories behind,” sang Nielsen, allowing the crowd to eclipse into a state of happily-drowsed wistfulness.
One of the motifs the band plays with a lot is the idea of escape, taking off and surging into a neon night, leaving all the dreams, hopes and despairs in the dust. They use their surfy guitar riffs to take the audience on a danceable journey, whether it is to the beach, from the beach or somewhere in between.
TJ Michaelchuck, a musician from Charlotte, came out to the show because he had a personal connection with the band.
“My band played in Charlotte with one of the member’s other bands and he was telling us about The Growlers,” Michaelchuck said. “I just wanted to know and I’ve been listening to them since.”
The tangerine, fuchsia and apple-colored lights bounced over the crowd as they became slowly more alive and drew them into a dreamlike vortex. People could be seen in the crowd looking at each other, laughing, smiling and above all, dancing.

“It was a dance party as usual,” Michaelchuck said. “I mean, you can’t really expect more.”
This “can’t-really-expect-more” philosophy did not only pertain to Michaelchuck. Other members in the audience also found the band’s predictable sound to be secondary to their danceable qualities.
“I thought it was good,” said , a musician from Columbia, SC.. “I still think all the songs sound the same, but they’re fun to dance to.”
While The Growlers undoubtedly sound like the type of group that provides the defunct soundtrack to Urban Outfitters, it is perhaps the evolution of the collective that makes them most interesting.
City Club was produced by Julian Casablancas of The Strokes and has a decidedly slicker and more-polished style than its predecessor, 2014’s Chinese Fountain. The album has drawn comparisons to that of Casablancas’ most famous band, The Strokes, with Consequence of Sound referring to it as basically a leather jacket in song form, pumped full of enough neon and New York cool to kill a horse.
This switch to Casablancas displays a unique departure from their previous album, which was recorded in Topanga Valley, California. While Chinese Fountain was also distinctly heralded as being more polished than the previous works, this current evolution away from the raw, jangly surf of Hot Tropics may herald a new direction in the band, one which may be a sign they are ready to go beyond small dive bars and dingy underground clubs.
The motif of the road, however, has and probably forever will, play an essential component in the music of the band. “So he drinks and takes his time under the fate of the road,” sang the band in a tale of lonely drives on Sunset Drive. On City Club, they sing of both feet on the gas, memories made of ash, failure as one’s guide, age by one’s side.
The need to be on the road, which the band has been for the past 8 years and 5 albums, is almost a beatnik-y compulsion, filled with whiskey-tinged nights, neon lights and the scorn of a thousand disappointments and moments of existential glory.
After all, Nielsen sang, as the “City Club” sign flickered back on and heralded the band’s encore, “It ain’t where we come from, or where we are right now. It’s where we’re going to.”
Delete Image
Align Left
Align Center
Align Right
Align Left
Align Center
Delete Heading