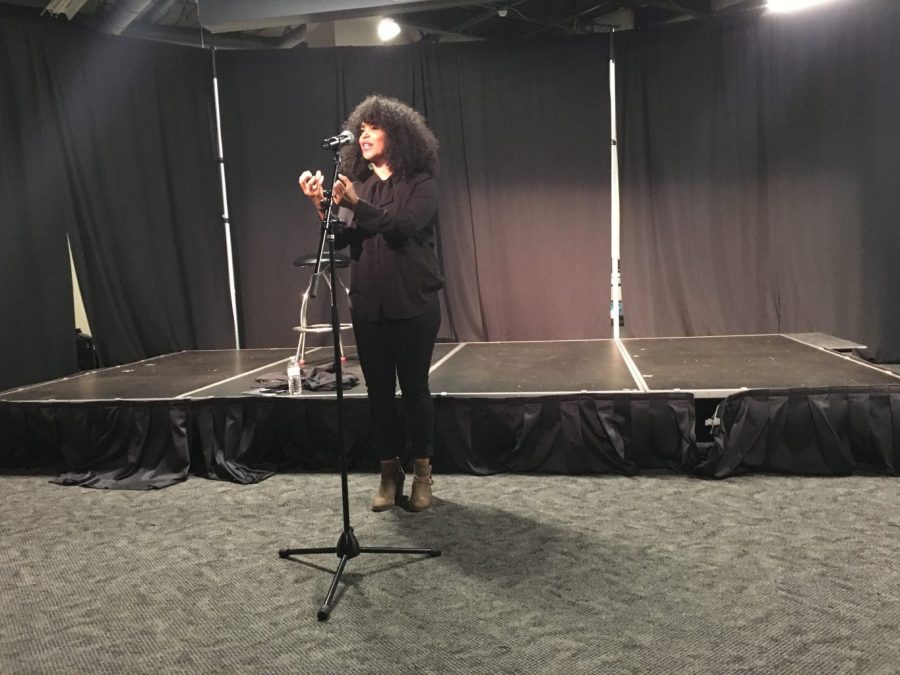 There are only a few people sitting in Alumni Hall when Elizabeth Acevedo makes her way from backstage and takes a seat in the front row. She takes out her phone and buries herself in it while more students start filtering in.
It is only when a member of Underdog Productions walks up to the stage to do an introduction, does she look up. When the introduction is finished she rises and makes her way to the front of the stage.
Rather than stepping onto the stage where a microphone stand and stool are waiting for her, she lays her phone and water down on the stage and brings the stand down to the floor. The room is silently watching her.
She looks down, takes a deep breath and launches into a rap verse. She finishes and the audience claps politely.
“I get nervous before all of my shows,” Acevedo said. “When I get nervous I turn to hip-hop. It’s my comfort zone.”
The audience laughs as Acevedo continues, giving the crowd an introduction to spoken word poetry and the etiquette of responding to poetry: snaps in lieu of applause and exclamations of “yas” and “mmm” when emotions are stirred.
In a matter of minutes, the shy Acevedo is replaced with an upbeat version of herself who makes the audience laugh.
“For the next 45 minutes we are in a relationship and I know some of y’all are afraid of commitment which is why this is only 45 minutes,” Acevedo said. “This is an interactive art form.”
Acevedo has a master’s degree in creative writing from the University of Maryland where, in her program, she was the only student of color and from an inner city. She said she was given an assignment from a professor to write an ode to an animal.
When she decided to write an ode to a rat, her professor told her rats were not good enough to be written about. Acevedo said she felt hurt by this because where she was from rats were everywhere and she took the professor’s comments as saying she was not good enough.
“Write your rats,” Acevedo said before performing the poem that came from that assignment. “Write what people told you were too ugly.”
Acevedo continued to explain her poetry, saying it comes from her experiences, specifically coming from an Afro-Dominican household. She said many of her poems are not inherently political, but are political in that they tackle politicized subjects, such as hair.
“I’m Dominican every day,” Acevedo said “Not just during Latino Heritage Month.”
Moving away from her heritage, Acevedo spoke of her partner, a black man. She said when she first introduced her partner to her mother, her mother was upset and wondered why two oppressed people would come together, as it would mean double the trouble.
One of the most powerful poems of Acevedo’s set list talks about her partner and what she fears will happen to him, that he will be another hashtag, another black man shot down by police.
She said the situation is not theoretical for her or about whether or not cops are good or bad. She describes this poem as a love letter to her partner and her country.
This is one of two poems Acevedo said challenges her to perform. Although she usually performs only one, she performed both Wednesday night. She said she performs these poems because they may be uncomfortable, but they are important.
Her second uncomfortable poem is about her fear of raising a daughter in this world.
“I’m going to raise a daughter that is motherfucking fierce,” Acevedo said. “I just want to raise a kid that feels she’s safe in her own body, that feels she’s enough.”
Although most of Acevedo’s poems are heavy and deal with tough subject matter, she does have one joyful poem she performs. It is a love poem she performed in order to attract her partner.
“If you need advice on how to bag someone, my advice is to write a love poem and Pokémon that shit,” Acevedo introduces the love poem.
Acevedo continued through her set, stopping to introduce each poem before performing it.
At the Q&A session after her performance, she said she is an introvert and performing is hard for her, but she continues because she has a lot of stories to tell and she doesn’t want to die knowing she didn’t tell them.
Audience member Zoe Bergmire-Sweat was hanging onto every word of the performance.
“Elizabeth Acevedo, being a beat poet and representing a woman of color, is so eloquent and brave in expressing her fears and her stories and telling a real truth,” Bergmire-Sweat said. “I think a lot of privileged students don’t get to hear it often.”
After performing her final poem, Acevedo explained she opens and closes each set with a rap verse because she started out as wanting to be a hip hop artist.
As a final note, she challenged the audience to write a rap verse for themselves.
“Let it be a reclamation of your own dopeness,” Acevedo said. “When the world is heavy, spit that verse to yourself and know that you are good enough.”