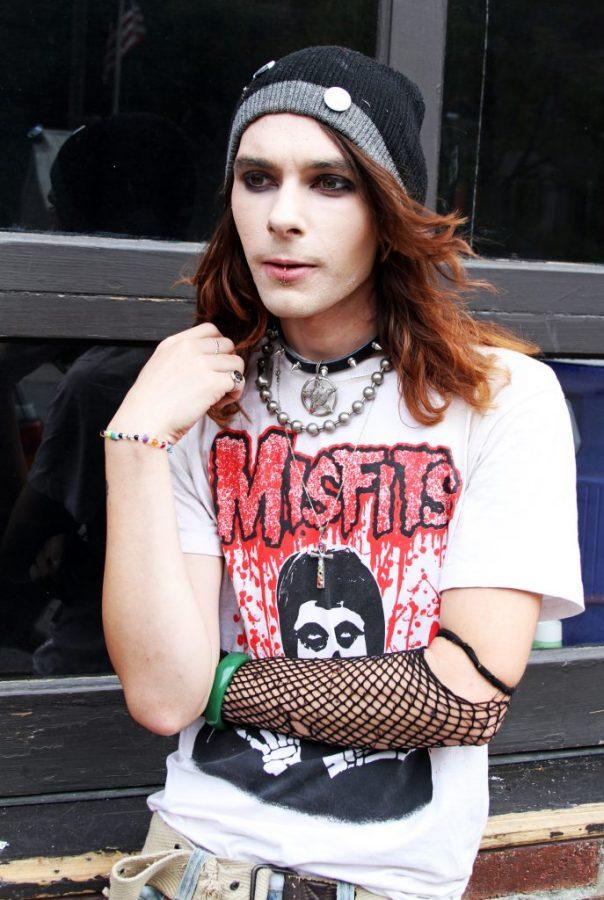 Josie Santagavo found refuge in the occult after being raised in a Christian environment. Photo by Megan Authement.

That’s awesome. So how did you get into that? What was it that inspired you?
“I’ve always been really sensitive to spirits and things like that, energy and I was raised really Christian, so it was very forbidden and naturally, I was very drawn to the occult so, you know, I learned to be a witch, I guess.”
Yeah, that’s cool. What are some things you’ve realized since becoming a witch that you’d say has changed your life?
“It’s empowering. I feel free finally. I’m not guilted by the whole Christian dogma thing and I’m just doing really good. I’m very happy with my life.”

What made you decide to move to Asheville?
“I lived here about five years ago and I loved it and I stayed here for about six months, maybe almost a year. So, I was having a really hard time where I came from. I came here from Andrews. Andrews is a really small town. It’s about two hours away and I was coming back and forth between Knoxville and there and my ex-boyfriend, you know, things weren’t good with that and he was an alcoholic and into drugs and everything. So, I came here to get away from him and start over, to heal, start over and recover from a lot of things.”
If you were to describe your style, what would you say?
“Oh gosh. As cliché as it sounds, I guess a mix between goth and punk, you know? I don’t really like labels I guess. But I guess if that’s in a box, that’s what I would be.”
If you were to describe your personality in three words, which three words would you choose and why?
“Sporadic, spontaneous and centered at the same time.”
If you were to say creative inspirations that inspire you on a daily basis?
“Nature really inspires me and I love to people-watch. I really love feeling people and feeling their energies and observing them, of course, the city. I love it. It’s very beautiful.”
If you were to describe one thing you dislike about Asheville and like about Asheville?
“The police here. They’re very narrow-minded and dominant. I feel like they’re kind of trying to get all the street kids in jail, you know what I mean? It’s getting ridiculous. So, I’m probably going to be moving soon, sooner than I thought, actually.”
Where do you think you’re going to go?
“I’m going to go down to Florida for the winter once this hurricane goes.”
What do you like about Asheville?
“I like everything about Asheville, just about. I love the culture. It’s just a melting-pot of different personalities and people and you can just be whoever you want, you know? There’s really no standard here for individuality where you have to be — ”
Yeah, there’s no threshold really.
“Yeah, yeah.”

What brought you to Asheville?
“I’m just meeting up with some friends and I’m on my way back to Quebec. I’m jumping back and they were like, ‘Hey, we’re in Asheville.’ It’s a good spot for busking, they say.”
What inspires you to make music, would you say?
“That’s how I share. That’s my way. You know, some people will work regular jobs, but to me, this is a way to share energy and meet people.”
Yeah, that’s awesome. That’s a very positive way to be.
“I was in Highland this morning and I went busking there for 30 minutes and people walked by and they were like, ‘What are you doing? Do you see that in the streets? You’re barefoot! What are you doing?’ They just can’t help it. There’s a smile that comes over their face. That’s what I love to see.”
That’s so good. If you were to describe your personality in three words, which three words would you choose and why?
“Sunshine, hyperactive and overwhelmed.”
That’s the state of the world. Which part of Quebec are you from?
“So, Ottawa is in Ontario, but I live maybe 15 minutes away from Ottawa.”
So if you were to say what inspires you creatively, in terms of art, music, literature?
“A bunch of things, I mean, life itself is very inspiring, life, I guess, energy. It flows. I mean, I’m a performer. I don’t compose my own stuff. That’s my own way to make art, I would say. I’m a performer so I share other people. It’s just like emotions flowing through you.”
So if you were to say, just based on getting here, one thing you like about Asheville so far, what would you say?
“A bunch of people walking in the streets, so for buskers, that’s cool. Sometimes in cities you need a license, you need this, you need that to start busking and it doesn’t seem like it now, so it looks friendly to me.”
So what kind of music do you perform?
“So when I’m with Dusty, we play jazz, like old-standards. By myself, I play more pop music, just ‘cause it’s more simple and I’m a singer more than an instrumentalist. But I love traditional jazz. I was in New Orleans yesterday and it was great. There were people playing in the streets everywhere.”
Wow, so you’ve been criss-crossing around a lot.
“Yeah, I’m just burning gas.”
Delete Image
Align Left
Align Center
Align Right
Align Left
Align Center
Delete Heading