Point/Counterpoint: Voting versus not voting 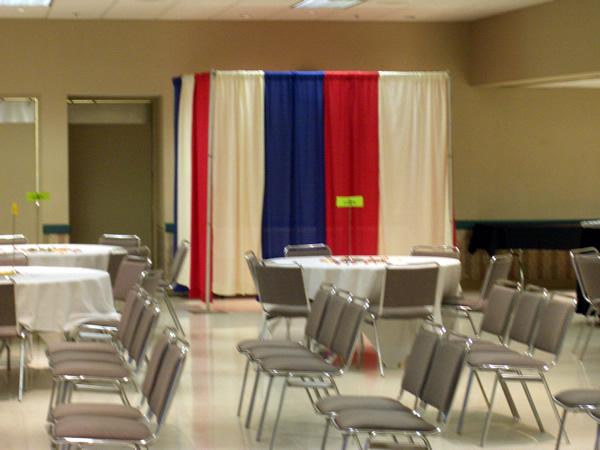 The importance of voting

Voting in the upcoming election is not only important, it is a necessity.
While presidential candidate Hillary Clinton isn’t ideal by any stretch of the imagination, a Trump presidency would be so much worse. The stakes are too high not to vote this year and voter apathy is simply not an option.
The biggest reason a large number of people do not vote is because they claim their vote ultimately will not matter, according to Common Cause.
Only 12 percent of individuals eligible to vote between the ages of 18 and 24 did so in the 2015 analysis of the U.S. Census. This means, ultimately, votes by that particular demographic didn’t matter as much as they could have.
It’s almost a self-fulfilling prophecy. In thinking their votes didn’t matter, those who didn’t vote ultimately made those votes not matter.
However, if more young adults between those ages had voted, it would have made a significant difference. Sure, one drop in the bucket doesn’t seem like much, but if everyone puts a drop in the bucket then it would be filled.
If everyone who didn’t vote who thought it would not matter did, it would have mattered. Voting means there is a chance of creating change, whereas not voting simply eliminates the possibility of there being change in the first place.
The second biggest reason people do not vote is because they feel they are picking between the lesser of two evils. This argument comes with a large flaw, in not voting it makes it easier for what an individual considers the greater of two evils to be placed at the head of this country. Choosing the lesser of two evils is still an evil, but one comes at a much greater cost than the other.
Other individuals choose to protest by either not voting or by voting for a third party candidate, which is a mistake. In an election, due to the flaws of our bipartisan system, there are only three valid options: vote Democrat, vote Republican, or be fine with whomever is elected by everyone else. In the 2000 election, many people who were advocating for environmental change voted for Robert Nader, a third party candidate, or not at all. This allowed George W. Bush to win the presidency. As a result, Al Gore, the candidate who supported environmental views closer to those protesting, lost the election.
Not voting is not a valid method of protest, it is simply inaction. Even though Nader got a surprisingly large number of votes, it allowed a win for the candidate that was much less inclined towards their beliefs and ultimately nothing significant changed. Protest voting actually ended up working against their cause and third party candidates still get little to no attention. No one listens to protest votes or protest non-votes. It is unfortunate, but being so does not make it any less of a fact. Protesting a vote by not picking either of the two candidates is simply a wasted vote that ultimately boils down to letting everyone else pick. There are other ways to protest and make one’s voice heard, but using the election to do so is not a viable choice.
Neither candidate this election year is an incredible choice, but one is certainly better than the other. If any year is the year to vote, this is the one.
A failing vote is still better than one that wasn’t made at all. The less desirable candidate being voted into power is also the fault of those who chose inaction. Do not let Election Day pass by without casting a vote.

Why not voting is OK

Just because society is told to vote does not mean it is obligated to do so. If neither candidate aligns with an individual’s own beliefs or their party’s candidate does not accurately reflect their own ideas then they should not vote. Just as we have the right to vote we also have the right not to vote.
Both Hillary Clinton and Donald Trump have left many voters in a dilemma even within their respective parties. There is much opposition toward both of them and many voters Democrat and Republican alike are choosing to opt out of voting altogether or consider a third party option.
Apathetic votes can be more detrimental than not voting at all. The problem comes from voting out of fear. People may vote for Clinton because they fear what damage Trump could cause and others fear what Hillary could potentially cover up and vote for Trump. This election garners more support out of fear rather than genuine agreement.
With more voters becoming increasingly numb to the chaos of the current presidential race there is a chance for voter turnout to be lower. Not voting takes away from both candidates regardless, but still leaves room for those who want to vote. So instead of voting just to take one away from the opponent, not voting allows for everyone to practice true democracy.
If people are forced to vote there is a possibility they will make a mistake or make an irrational decision outside of their true beliefs. Urging people who do not want to vote only distances them from even thinking about voting.
Another valid reason comes from the flip-flopping of each candidate. Voters do not want to elect someone who wavers in opinion, especially someone who will be given that much power. The argument, ‘If one does not vote they can not complain because they did not participate’ is untrue. While there is some validity to the statement, it does not mean voting gives one the right to complain.
Everyone has free speech and no matter who wins the election we will still possess the ability to speak freely. So attempting to guilt non-voters into voting only adds to the already overwhelming apathy. According to Forbes, the idea of not voting is a form of participation as well, just not in the way society implies.
Society encourages everyone who is able to vote to exercise this right, especially millennials. According to the Pew Research Center, voters between the ages of 18 and 35 comprise 31 percent of the total voting population. However many millennials do not feel like their vote will matter, leading to low turnout amongst them.
Despite being a significant part of the entire voting population, millennials can still choose not to vote just like all the other age groups. The freedom comes from this decision. Not voting evokes a democratic dignity within individuals which allows them to exercise a right many fear.
While some may see it as a selfish or ignorant option, voting comes down to the individual and if someone really feels the urge to vote, regardless of motive, they will.
Fearmongering may gather more voters, or it may repel them. We are all accountable for our actions and the potential repercussions or innocuous outcomes of not voting will decide what not voting can do to democracy.
Come November there should be no urge to vote if one does not want to. Instead, exercise individual democracy in a way which represents true belief whether expressed by voting or not voting. Voting should not be something forced upon society, rather a device used to influence that which encompasses it.