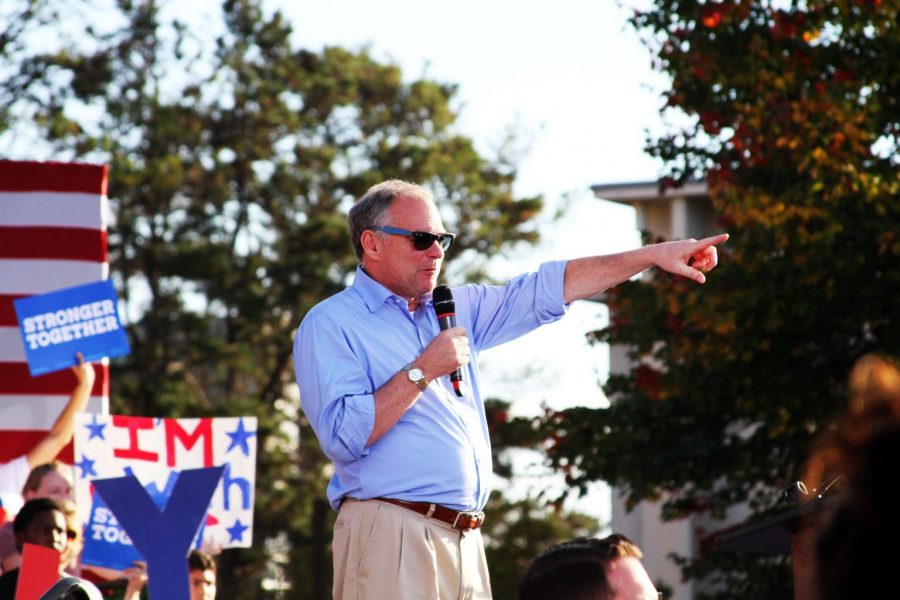 Tim Kaine in the process of motivating students to vote early. Photo by Nick Haseloff.

The early voting rally hosting Tim Kaine was arranged by the Political Science club at UNC Asheville. This was not a university-sponsored event since it was put together by the club adviser, assistant professor in political science Ashley Moraguez and president of the club Rachel Maynard.
“My adviser held the biggest role in all of this, I just helped with the setup and the emailing for this event since it was so last minute,” junior Maynard said.
Ashley Moraguez said the rally was a very quick process and happened recently.
“The Clinton campaign first reached out to us on Sunday night,” Moraguez said. “We replied immediately and everything fell in place by Monday. Since early voting opens tomorrow, this is an opportune time for Kaine to reach the younger crowd.”


Kaine talked about reproductive rights, minimum wage and climate sciences from his and Clinton’s campaign view in comparison to Trump’s campaign.
“Hillary and I believe in this science and we want to move forward. Inventing the clean energy economy of tomorrow and doing the things that will save the planet in tandem with people around the world,” Kaine said. “Donald Trump said climate change is a hoax invented by the Chinese and that is a quote. That is a quote from a book he wrote.”
Kaine said the flooding from Hurricane Matthew on the East Coast of the U.S. fits the predictions of more unusual weather due to climate change.
According to Kaine, he and Clinton have goals to make college in the U.S. debt-free. The duo plans to make college tuition-free for students whose families make less than $125,000 a year.
Kaine asked the crowd if any of them ever experienced being told they could not achieve their dreams then related this question to Clinton, saying many doubted her because they felt the jobs she went into were male fields.
Gabriella Livanos, a junior psychology student, related the original question from Kaine to both her and her family’s experiences.
“I got very emotional and began to cry when he was saying to people “Have you ever felt like somebody didn’t really believe in you,” Livanos said while choking back tears. “I really have experienced that feeling being Greek-American and everything my family has fought for. It just felt so fulfilling and so meaningful to be recognized in that way.”
Kaine also said he and Clinton are in favor of giving women reproductive rights and equal pay.
“[Trump] cannot look at a woman and see an equal. He can look at a woman and see a half-person and half-object,” Kaine said.
Christopher James, a junior student, said he went to the event to see Kaine up close. He also supports the Clinton-Kaine campaign.
“I believe in thoughtful and concern kind of effort being put into policy. When I look at her and her history that’s what I see constantly so I feel like it’s very easy for me to support her on those levels. Also I believe in the content of her character,” James said.
The vice presidential candidate said both he and Clinton want to increase minimum wage, while Trump’s intentions are to institute tax cuts and wage changes.
“His intention is to have tax cuts for the wealthiest. He’s even said American wages are too high.”
According to Kaine, in the U.S. 19 percent of people in congress are currently women, ranking the U.S. as 75th in the world. This statistic shows the U.S. is below global average.
In Iraq 26 percent of their national legislature is made up of women and in Afghanistan women make up 28 percent. The highest is in Rwanda where women make up 64 percent of their legislature.
“All over the globe, countries have done better than us,” Kaine said. “But part of being a great nation is looking into the mirror and saying, ‘But we’re not good at this and we have to get better at this. And we’re not good at electing women into federal office.’”
The vice presidential candidate stated the fact the U.S. has never had a female as president in America’s history.

“If it had been easy to elect a woman president, there would’ve been a woman president,” Kaine said.
Despite the upbeat and mostly positive atmosphere of the rally, a few counts of vocal protest by attendants did occur throughout the event.
One protester yelled, “Hillary for prison,” then began chanting “Trump” across a crowd of Hillary supporters. Another protester yelled about Hillary’s email scandals, which took place at the start of her campaign. A third protester wore a shirt that read “Bill Clinton is a rapist” which he shouted those words as he jumped through the crowd until he was escorted out by members of the Secret Service.
UNCA students who were originally Bernie supporters said they are now voting for Clinton.
UNCA junior Mackenzie Sanders said she initially voted for Bernie Sanders during the primary. Now she plans to vote for Clinton.
“It’s either going to be Hillary or Trump,” Sanders said. “I care too much about people in general for Trump to have a chance at all.”
Junior Rachel Lickfeld said she hopes students will stick together to keep Trump out of office.
“I was also a Bernie supporter,” Lickfeld said. “I really feel like the threat of Trump as a president is so overwhelming that hopefully students will stick together to keep the racist, circus peanut out of office.”
Senior Kol Gold-Leighton said he thinks third party candidates should not be discounted.
“I feel that third-party candidates are equally as valuable to our elections as any other political candidate,” Gold-Leighton said. “During this election cycle, I do not feel that the majority of the third party candidates such as Johnson or Stein carry an overwhelming amount of experience or the professionalism to earn my vote.”
Lickfeld said she likes the idea of third-party candidates, but not for the 2016 election.
“I think that in any other election third-party candidates would be interesting and a good idea,” Lickfeld said. “But since the stakes are so high in this one, I think that splitting the vote is a really bad idea.”
Delete Image
Align Left
Align Center
Align Right
Align Left
Align Center
Delete Heading