Plant-based lifestyle is healthy for both humans and the planet 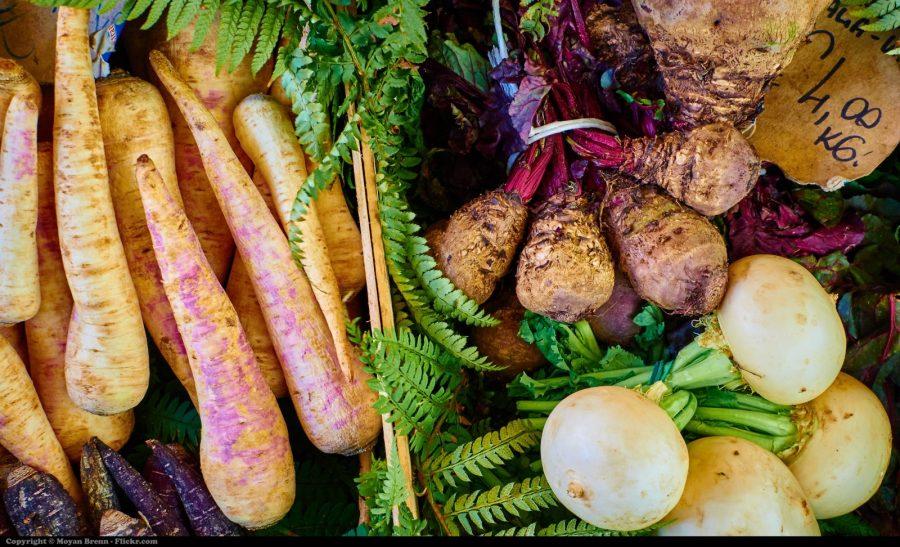 Research argue eating a plant-based diet will improve health and do wonders for your food budget. Photo courtesy of Moyan Brenn.

Catherine Pigg
A&F Staff Writer
[email protected]
A plant-based diet provides a healthy eating style, potentially reversing some diseases, said Amy Lanou, chair of the health and wellness department at UNC Asheville.
“There are lots of benefits to plant-based eating styles. The things that are most well established are prevention of coronary heart disease and actually reversal of atherosclerosis. We have seen with very low fat entirely plant-based eating styles, similar with diabetes, type 2 diabetes,” Lanou said. “A vegetarian or vegan lifestyle will help a person avoid type 2 diabetes and if you have diabetes you can manage type 2 diabetes and reverse it with an entirely plant-based eating style.”
Lanou also serves as a nutrition scientist for the Physicians Committee for Responsible Medicine and holds a Ph.D. in human nutrition from Cornell University.
Laura Sexton, a  registered dietitian at UNCA, said a plant-based diet could be good for the environment and people.


“I think that when done in a way that really looks out for both human health and the health of our environment around us, that a plant based diet is better for people and planet,” Sexton said.
Industrial animal agriculture is one of the leading causes of species extinction as well as water pollution and habitat destruction. More greenhouse gas emissions are caused by animal agriculture than all the cars, trucks and trains in the world combined, according to a research analysis conducted by Rob Bailey, Antony Froggatt and Laura Wellesley of the Energy, Environment and Resources Department at Chatham House.
A person who makes an effort to eat a mostly plant-based diet will see significant health increases, according to Sexton.
“And then I’ll add one more which might surprise folks, which is osteoporosis. There is really good evidence at this point that entirely plant-based diets are and generally diets that have more plant foods and less animals foods are bone-health-promoting or help to reduce the risk of osteoporosis,” Lanou said.
Plant-based eating can also be cheaper in some cases. An individual can save $750 a year by eating a plant-based diet and substituting olive oil as a protein source rather than lean animal protein, according to a study published in The Journal of & Environmental Nutrition by Mary Flynn and Andrew Schiff.
Makennah Bristow, a physics student double minoring in math and astronomy, embraced veganism about two and a half years ago.
“I actually started by changing all of my products to be cruelty free and then I figured I should probably have a diet to go along with that. I had been vegetarian for four years prior to becoming vegan, so I just sort of slowly made the transition on my own and then I announced it to everyone and made it official,” Bristow said.
A plant-based eating style can also help with weight management, according to Lanou.
“Across the world, people who eat plant-based diets are lower weight, maintain lower weights than people who eat omnivorous ones. In the western world, it’s 10 to 20 percent lower body weights on average for vegetarians and vegans, which helps to promote good health throughout our life,” Lanou said.
Plants have fiber and complex carbohydrates, a healthier alternative to refined carbohydrates found in processed foods, according to UNCA’s registered dietician.
“So for example plants contain fibers, those fibers combine to cholesterol, right?” Sexton said. “So that’s really an important mechanism that a plant provides for us, so people that tend to consume few plants and a very high meat and saturated fat dairy diet, you see an increased risk of heart disease and other chronic diseases.”
Humans are able to digest a wide variety of foods because our bodies are super adaptable, according to Lanou.
“As hunters and gatherers, people would consume what they could consume just to get in calories and energy. I think we have evolved more to eat plants and that we’re finding now we don’t require as much meat or any meat if we do it in a way that really is balanced,” Sexton said.
Women who are vegan are able to have healthy pregnancies and deliver healthy babies, according to UNCA’s registered dietician.
“I think entirely plant based diets are not only safe for children, even very small children, but are actually really preferable in the sense that if you can start a kid eating healthfully at two, three, five, seven years old they carry those eating styles with them, they carry those eating habits with them into adulthood,” Lanou said. “And so you’re already doing them a favor by having them understand how to eat in such a way that they won’t run into problems with early onset diabetes or early onset hypertension or those kinds of things.”
Lanou wrote a book, “Healthy Eating for Life for Children,” about raising children on an entirely plant-based diet after breastfeeding in 2002.
“And from my perspectives, given the health benefits of entirely plant-based diets or diets that are just closer to plant-based,” Lanou said. “If they’re especially built from wholefoods, not the super highly processed foods.”
One exception for human’s super adaptable bodies is the mammalian milk of other species, according to Lanou.
“So about three out of four people in the world are lactose intolerant. We also know that the proteins in milk are cancer promoting, the fat in milk is heart disease and diabetes promoting. So of the animal foods, the ones I would say the one that humans have a difficulty processing, it would be the products that come from mammalian milk,” Lanou said.
According to Lanou, it becomes not only a health question, but also a question of ethics. Whether we should raise animals for the express purpose of consuming their milk, their eggs or even their flesh.
“I would say from the perspective of the environment, the perspective of the ways that we are doing that in this country and how cruel an industry, both to the humans who work in it and the animals who live in it, I think we shouldn’t,” Lanou said.
Delete Image
Align Left
Align Center
Align Right
Align Left
Align Center
Delete Heading