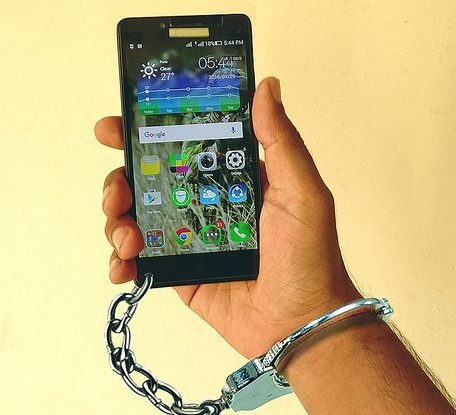 R. Gray
Opinion Staff Writer
[email protected]
Endless jokes and political cartoons depict how cellphones harm this generation and how
millennials find more interest in their phones than the world around them. Just about everyone experiences some form of criticism of youths and their addiction to their smartphones.
Interestingly enough, these complaints are not anything new — the same worries were expressed by previous generations time and time again with each new iteration of technology.


Cellphone culture is not the end of civilization as we know it, but simply a change in the distribution of information in our culture. If anything, keeping a tight grip on the way things used to be rather than embracing the new holds society back.
Grievances over the overwhelming amount of data one can parse through reigns as one of the most common gripes millennials hear about smartphones and the constant access to the internet and other resources. Warnings of this nature happen to be several hundred years old.
Conrad Gessner, a well-respected Swiss scientist, warned about the dangers of the unmanageable abundance of information before his death in 1565. He was referring to the printing press and yet his concerns are echoed by the previous generation regarding the technology of this day.
Another topic people bemoan is the downfall of the English language with the rise of textspeak. Also hardly a new complaint, people complained about how the next generation would bring about the downfall of English since as early as 1780. In the preface of A General Dictionary of the English Language by Thomas Sheridan, he laments because of the youth of his age, “English is likely to become a mere jargon, which every one may pronounce as he pleases.”
Sounds familiar, right?
Smartphones also allow people to communicate with friends and family easily. They make long distance relationships easier. It is also much easier to keep up with loved ones who live internationally.
Being able to communicate and exchange information with ease never qualifies as a bad thing. It allows one to organize events and meetings, to posses easy access to help in case of an emergency and to maintain connections with other people among many other benefits.
Real dangers lie in the overuse and disregard for safety when it comes to cellphones, but when used appropriately they do not pose a societal threat just because someone is paying attention to their phone. Smartphones will not be the end of all things and the previous generation simply repeat complaints that perpetuate history, just as we will most likely do once the next big advancement in communication comes around.
Delete Image
Align Left
Align Center
Align Right
Align Left
Align Center
Delete Heading