Of Montreal brings psychedelic grooves to The Grey Eagle 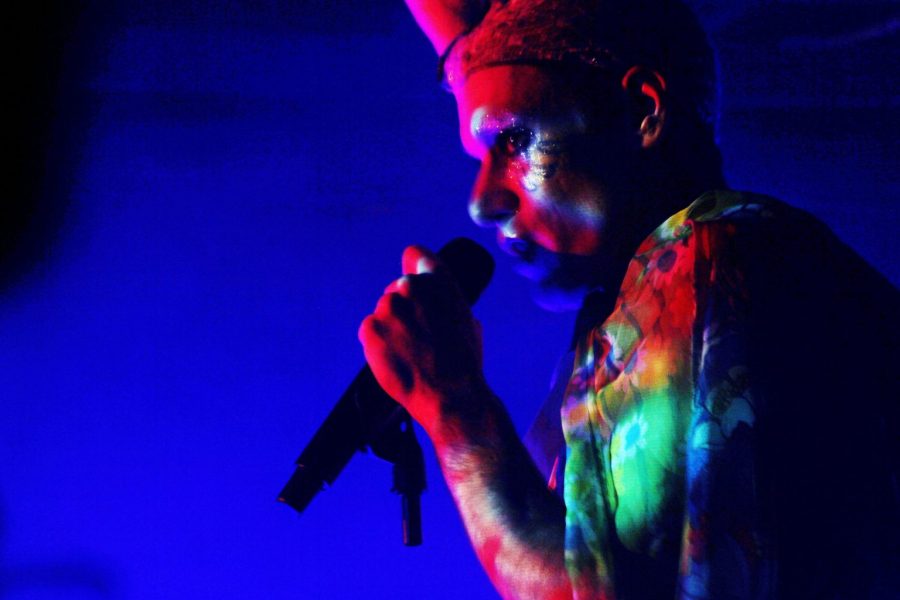 Of Montreal's Kevin Barnes, with his face covered in glitter, sings at The Grey Eagle on Oct. 12. Photo by Megan Authement.

Heavily influenced by contemporary electronic dance music, the entire album was written and recorded during an extended stay in Paris where Barnes sought inspiration, according to a press release.
The members arrived on stage adorning black hooded cloaks, walking through a cloud of fog and black light in front of a background of five red pentagrams. Barnes’ cloak was stitched with neon green light-up trim, smoke spilling from underneath his hood, creating an illusion of a faceless grim reaper arriving to snatch the souls of the wicked and damned.
The band shed their mysterious, dark cloaks before opening the show with a rendition of  “it’s different for girls,” the lead single off Innocence Reaches.
“It’s different for girls, they don’t spit on the streets, they don’t piss on the seat, they don’t have to size up every person they meet,” Barnes sung, sporting red stockings and a short, white sheer dress and blonde bob wig.
The rest of the band wore white onesies, allowing trippy geometric and floral patterns to project onto their jumpsuits.

Pop art projections illuminated the band as two girls wearing unsettling female masks, often featured in horror films and bank heists, launched confetti onto the audience.
Of Montreal revisited their 2008 effort Skeletal Lamping with the track “Gallery Piece,” as the girls stepped onto the stage wearing over-sized skull masks, eventually gyrating to the song, inspiring the entire audience to take note and join the disco dance party.
After performing “Wraith Pinned to the Mist” off 2005’s The Sunlandic Twins, the group revisited their current album with the track “a sport and a pastime.”
Throughout the evening, the band performed mash-ups of their tracks to fit in as much material as possible from their eclectic repertoire, delighting viewers with new material and fan-favorites alike.
Barnes performed a seductive strip-tease for the audience, losing his dress to showcase his toned legs beneath the red stockings before departing off stage for his first costume change of the evening.
He emerged moments later in a skin-tight black catsuit and a leather biker hat cocked to the side, transitioning into the song “Labyrinthian Pomp” off 2007’s Hissing Fauna, Are You the Destroyer?
“How you wanna tag my style when I am so superior?” Barnes crooned. “How you wanna hate a thing when you are so inferior?”

The group’s two hype girls arrived gracing masks covered in curly blond hair, appearing to adorn eyeless and mouthless 360 degree afros on their heads.
The girls traded their afros for red demon masks, wedding dresses and lit up angel wings for the band’s rendition of “Our Riotous Defects,” off the 2010 album False Priests.
“You are such a crazy girl, you’re just a crazy girl, and I don’t know why I even try to understand you,” Barnes lamented.
White balloons bunched together were tossed into the audience by the demonic brides, playfully tossed throughout the air by gleeful attendees.
The band shared two covers that night, David Bowie’s “The Man Who Sold the World” and Prince’s “1999” before heading into their encore rendition of “Heimdalsgate Like a Promethean Curse” off Hissing Fauna.
“Chemicals don’t strangle my pen; chemicals don’t make me sick again,” Barnes sang in front of the ecstatic, cheering crowd. “I’m always so dubious of your intent, like I can’t afford to replace what you’ve spent.”
Senior fine art student Shana Glawson saw of Montreal once before in 2004 at Vincent’s Ear, a now defunct speakeasy and music venue off Lexington Avenue.
“They are always very David Bowie-esque in their costuming, vocals and lyrics,” Glawson said.
Over a decade later, Glawson decided to see the band again and was not disappointed.
“I enjoyed the costume theatrics as well as the visual effects,” Glawson said. “I would definitely love to see them again. I had so much fun dancing.”
Senior sociology and new media student Malaney Jackson saw of Montreal twice prior to the Oct. 12 show.
“Unlike most artists, when you come see of Montreal again, it’s a completely new experience. That’s mostly due to the theatrics and how interactive the shows are,” Jackson said. “You never know what to expect and it’s always something you haven’t seen before.”
Although the band’s new material is not Jackson’s favorite, she said she loved the diverse set list they played throughout the evening.
“The feathers and confetti are also a personal favorite thing they do. They’ve done it at every show I’ve been to,” Jackson said. “The Donald Trump penis monster wasn’t so bad either.”
The Donald Trump penis monster featured a person wearing a Donald Trump mask with a spiteful grimace, their face the tip of an inflatable penis.
A friend purchased sophomore
’s ticket to her first of Montreal show, hoping to introduce her to a band he thought she would like.
His efforts proved successful.
“It was such a performance!” Houston said. “Of Montreal really made it into an artistic, theatrical show rather than just performing songs.”
After an hour and a half of pure dance mayhem, exhausted yet overjoyed fans strolled across the floor littered with glitter, feathers and confetti as they exited the Grey Eagle, already preparing themselves for of Montreal’s next visit to Asheville.
Delete Image
Align Left
Align Center
Align Right
Align Left
Align Center
Delete Heading