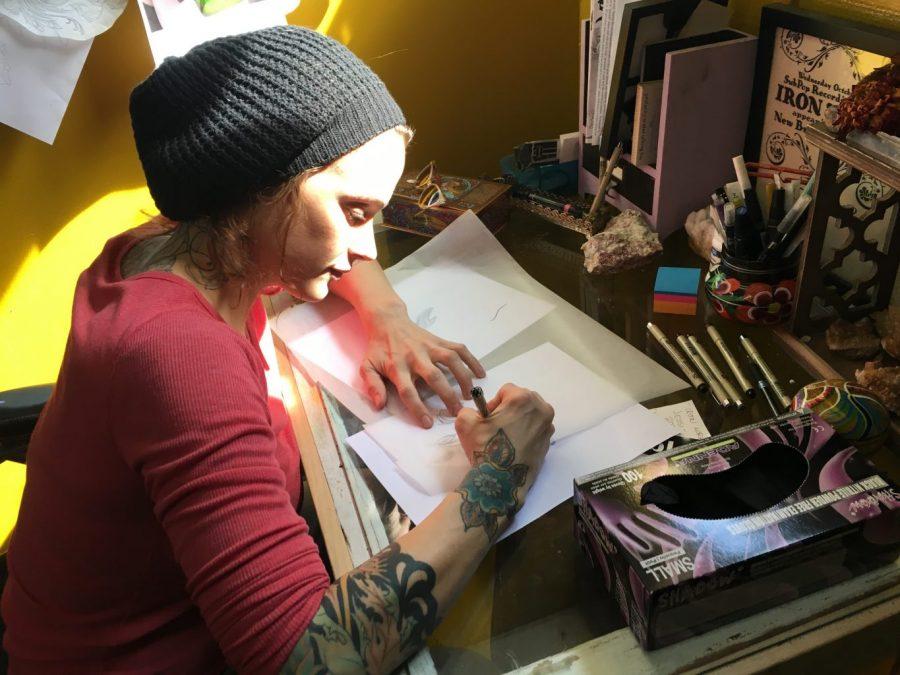 BB June, owner of Thistle and Pearl Tattoo, draws a design for a client. Photo by Karrigan Monk.

Walk downtown and you will pass several tattoo shops. On the way there, you probably passed several more and those are just the ones with prime real estate locations. Elsewhere in Asheville, there are dozens more.
For someone looking to get a tattoo in Asheville, the task can be daunting. Advice can be found in comment sections online, “best of” lists, and word of mouth. Perhaps the best way to find the perfect artists is to simply visit the shops themselves. In fact, many artists welcome new clients to come in to view portfolios in person.
Kimi Leger, owner of Sacred Lotus Tattoo, was named Best Tattoo Artist of 2016 by Mountain Xpress. She received this honor after almost 13 years of tattooing in Asheville.
“I apprenticed in more of a street-style shop and I wanted to open a place that just felt really comfortable — almost Zen-like,” Leger said. “A place where people could come in and just feel relaxed and have a more custom approach to the tattoos and have an atmosphere that is as least intimidating as possible.”


As a child, Leger was always interested in drawing and the idea of putting her art on someone permanently in the form of a tattoo. When she was 18, she began hanging around a tattoo shop where she would just watch and ask questions. At the age of 21, she landed a formal apprenticeship.
Since then, Leger became a prolific artist who is well known for her cover-ups, something she is taking a break from at the moment.
“I’ve taken on so many really challenging cover-ups. I think at this point cover-ups are probably my least favorite,” Leger said. “They’re still very satisfying, but it sort of limits how you can do your art because you’re working around an obstacle.”
Leger’s favorite tattoos deal with objects from the natural world. She said she really enjoys plants and animals as well as geometric blackwork and sacred geometry.
Another tattoo artist in Asheville, BB June, owner of Thistle and Pearl Tattoo, also enjoys tattooing botanical pieces in addition to aesthetically pleasing and meaningful pieces.
“I really love transforming. I’ve had clients who have scars and they use tattoos to camouflage it or draw attention away from it, and one of the best parts of my job is when you do a tattoo and afterward the client is so grateful,” June said. “I’ve had people cry. I’ve had it be life-changing for people because they went from one day feeling insecure and not confident because of these scars and then the next day not only confident, but that they want to show people.”

Like Sacred Lotus Tattoo, Thistle and Pearl try to make the tattoo environment as comfortable as possible for clients. The lobby of the shop features comfortable couches and the entire shop is decorated in a way that makes it feel less like a business and more like visiting a friend.
What makes Thistle and Pearl Tattoo stand out for many clients is the fact they use Eternal Ink, a vegan ink. While this is a popular ink brand and many other shops may use it in conjunction with other brands, Thistle and Pearl uses it exclusively.

“The FDA isn’t involved at all in ink,” June said. “So people could be putting whatever they want into it and calling it tattoo pigment and no one’s checking to make sure that there’s no carcinogens or that it’s even safe.”
June explained black ink comes from carbon and is often created from charred animal remains. In contrast, Eternal Ink produces black ink from charred plants.
June employs four other artists, two women and two men. Although it is not something she intended, June said she thinks it is good to have a balance in a shop. She has worked in all-female shops as well as shops where she is the only female and finds it is best to have an even mix.
June got her start in tattooing as a henna artist at a renaissance festival. She and her friend did this throughout high school and college, but eventually fell out of touch. Through what June called a serendipitous coincidence, she and her friend both ended up in California. June was a recent college graduate with no idea of what to do and her friend was a tattoo artist looking for an apprentice.
“I had never forgotten about the idea of tattooing,” June said. “It had always appealed to me and I always wanted to pursue a career in art. I was always just super intimidated by the industry and intimated by tattoo artists in general and even tattoos.”
At the time, there were very few female tattoo artists and June jumped at the chance to apprentice under her friend. Every day she took a train from San Francisco to Davis, where her friend’s shop was located. The apprenticeship lasted for a year and a half while she was also working another job in San Francisco.

June is originally from Asheville and after living for 12 years in San Francisco and having a child, she moved back across the country to start her own shop.
Like June and Leger, most tattoo artists become interested in the art early in life.
Galen Holland, artist and owner of Freaks and Geeks Tattoo, cites a childhood experience as igniting his love for tattoos.
“It started as a kid at the beach seeing some old-timer with a tattoo,” Holland said. “From that point on I was fascinated with the art form. I didn’t get an apprenticeship until later in life. Most folks start around 18. I was almost 29.”
Holland said his favorite part of tattooing is carrying on the craft while also making it his own and being a positive ambassador to the art form.
Bianca Sky Kreba, an artist from Red Rabbit, grew up with a stepfather who was a tattoo artist. She said she eventually decided to pursue the art herself after spending so many years around it.
For Kreba, the best part about tattooing is getting to create art every day. Her least favorite part is having to explain to uninformed clients that sometimes ideas just are not possible, a frustration June said she shares.
“Tattoo reality shows give a pretty shitty idea of how the actual tattoo process is so I think sometimes people come in with the expectation of, ‘I’m going to give you this idea and you’re going to draw it up for me in ten minutes and we’re going to do it right then,’” June said. “A lot of people have a misunderstanding that custom tattoos take time and there’s this sort of impatience and it’s our job to explain that this is how the process is.”
Most shops in Asheville have a minimum charge of $60 and an hourly rate of around $130.
“The reason the hourly is what it is, is — I mean tattoos are expensive,” June said. “We’re not getting compensated for drawing time, we’re not getting compensated for any adjustments that need to be made to the drawing or time spent discussing the tattoo.”
Despite the fact many shops in Asheville have similar prices and talent, very little animosity lies between them.
“I love how connected the tattoo community is here,” Kreba said. “There are a lot of great artists in this town and everyone seems to really support each other, which is something I haven’t always experienced in other cities.”
For those wanting a first tattoo, the artists all suggest waiting to find the right artist for the client and the piece. Leger said to look at as many portfolios as possible, to not go too small and to wait for the artist, even if they are booked for a while. Holland suggested to listen to the artist because they often know best and want to do right by the client.
“Tattoos are something that people can look at and give them inspiration throughout the day,” June said. “I feel like it helps people overcome things. I feel like tattoos are a lot more powerful than just something to be cool.”
Delete Image
Align Left
Align Center
Align Right
Align Left
Align Center
Delete Heading