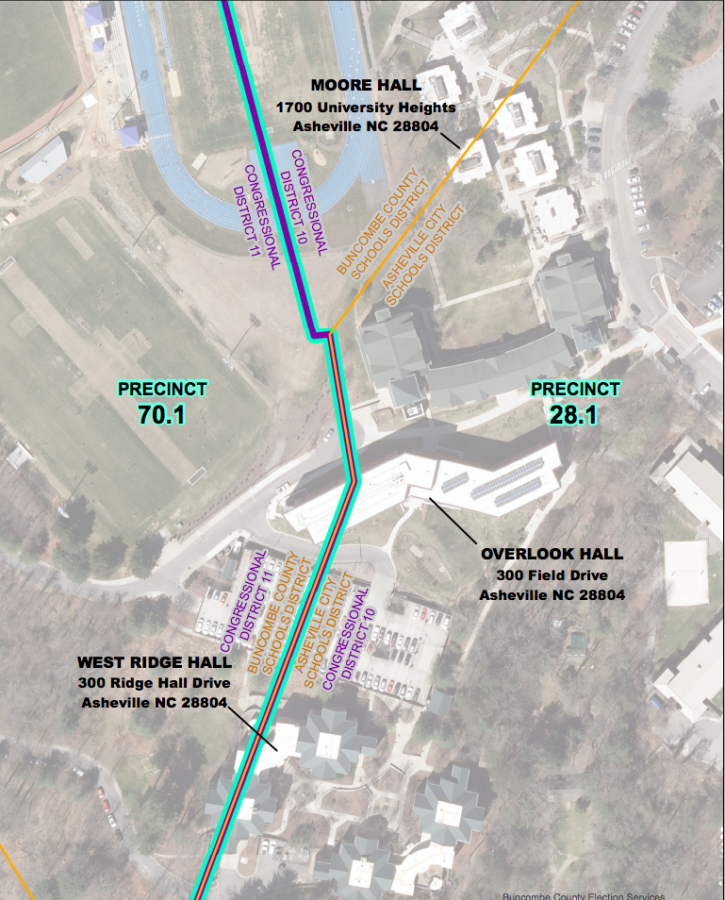 The map of UNCA shows a precinct line dividing residence halls on campus for the 2016 election. Map by Buncombe County Election Services.

Audra Goforth
News Staff Writer
[email protected]
A precinct split across UNC Asheville’s campus will create confusion for students living in Overlook and West Ridge residence halls on Election Day.
“We’ve tried to notify everyone,” said John Noce, education and absentee specialist with the Buncombe County Board of Election Services. “We’re trying to do everything we can on our side, so now it’s up to the students to be proactive and vote early.”
According to The Precinct Project, a precinct is the smallest political district and is comprised of all people who vote at your polling place.


Noce said the Buncombe County Election Services required residence hall numbers to locate the cutoff.
“We were trying to get the college to give us room numbers, which they were hesitant at first because they didn’t want to reveal too much personal information,” Noce said. “But this is public information on our behalf.”
The voting location for Precinct 70.1 is Woodfin Community Center and the voting location for Precinct 28.1 is Covenant Reformed Presbyterian.
Governors Hall, Governors Village, Mills Hall, Founders and South Ridge will not be affected by the split and all students who are registered in those residence halls can vote at Precinct 28.1.
Jennifer Sparks, the election information specialist at the Buncombe County Election Services, said the precinct map shows a split across campus and through certain residence halls.
“On the map there’s a precinct line and a congressional line. When the state legislature redrew the line, they shifted the precinct line to match the congressional line,” Sparks said. “It had never been split before by any major district, so when they did that and split the dorms, we had to contact UNCA and get the dorm layout, with room numbers, to find the exact cutoff.”
Sparks said the precinct lines were not intentionally drawn through campus.
“They determine the cutoffs by precinct lines so I don’t think whoever did this line knew it was cutting through a college campus,” Sparks said. “This is not the only building that this happened with. It’s common with some apartment buildings as well.”
According to the Virginia Policy Review, many voting districts split campuses apart, causing on-campus students to vote at different places.
Sparks also said the precincts keep voting outcomes from being skewed.
“It is important to make sure when something like this is split, a building, that you do assign them precincts,” Sparks said. “If something happened and they said, ‘Well we will just take what the majority of the dorm is in,’ then that dorm, being as big as it is, and if a congressional race is within a 40-50 vote difference, that could have a play in the outcome of the election.”
If students vote early they will not have to worry about the confusion of precinct cutoffs. Early voting began on Oct. 20 and will end on Nov. 5. UNCA provides its own early voting location in the Highsmith Student Union and any Buncombe county precinct is allowed to vote at that location.
“Now, if they vote early then they can avoid all that. At early voting they can go to any site,” Noce said.
Noce said students should vote early to avoid any possible confusion and should make sure their current addresses are up to date.
“It’s all about getting the word out so students will be aware about a split that wasn’t there before,” Noce said. “Students need to check where they are registered, building and room number, so they can know if they need to update their address.”
Sophomore student and political science club President Rachel Maynard said she hopes students will vote early to avoid the divide confusion.
“Not only is there the hassle of voting on Election Day, but this divide will make an already tedious process even more so,” Maynard said. “Luckily, Highsmith is an early voting location, which means students have between now and Nov. 5 to cut all the craziness out and just vote.”
The split of Precinct 70.1 and Precinct 28.1 divides part of Overlook and West Ridge residence halls. The split affects many rooms within these two residence halls, and a list designating room numbers with different precincts are listed below: 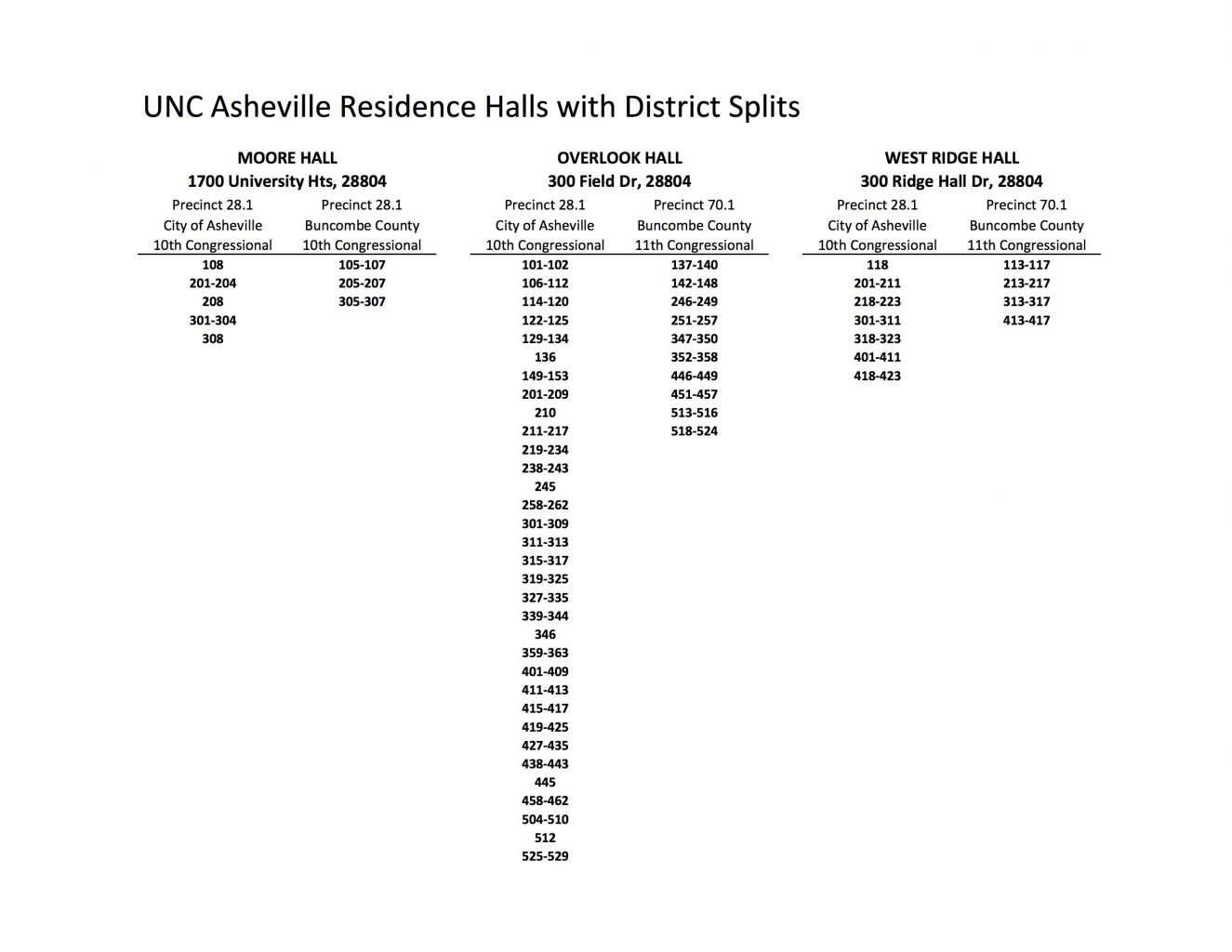