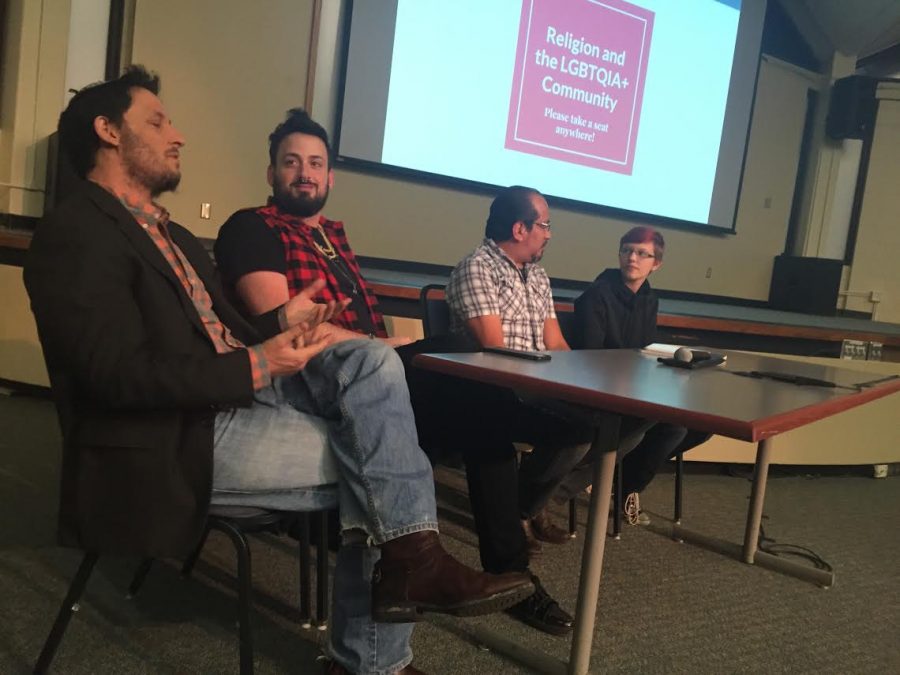 Panelists discuss how faith and LGBTQ+ identities do not have to be exclusive. Photo by Bailey Workman.


Bailey Workman
News Staff Writer
[email protected]
The question of whether or not religion and LGBTQ+ identities can coincide in harmony was the subject of an extensive dialogue Tuesday.
Mason Logan, president of Alliance, sees a long-standing struggle between religion and LGBTQ+ people he does not think needs to exist.
“There’s a narrative that’s perpetuated and has been perpetuated for a very long time, centuries, in fact, that queer people and religion are two completely incongruent things, that queer people can’t be religious and that religious people can’t accept queer people,” Logan said. “There is an increasing amount of queer people that are finding themselves not wanting, or not feeling comfortable, saying they don’t identify with their religious communities.”
Francisco Gonzalez, pastor at Christ Community Church of Asheville, Justin Goldstein, rabbi at Congregation Beth Israel in Asheville and Justin Mote, tarot reader at Asheville Raven and Crone, all spoke in the Humanities Lecture Hall.
After an introduction by Logan, panelists answered questions asked by students through slideshows and offered different perspectives throughout the discussion.
Logan said the purpose of the panel was to affirm students who feel conflicted, but also to show non-LGBTQ+ people the clash many feel between religious communities and the LGBTQ+ community.
“A big part of it was affirming to students who are on this campus who are queer and who hold a religious identity that those are not two things that can’t go together. People are multifaceted,” Logan said. “But also, to open this discussion to people who may not have considered this. People who are cis and straight and come from a variety of different backgrounds who never really considered some people find these two things to not really fit well together.”
While there were minor differences, the panelists all concluded they felt identifying as religious and identifying as LGBTQ+ do not have to be mutually exclusive, citing various textual interpretations and personal experience.
The panelists also agreed while religious institutions are not yet as inclusive as they need to be, churches are beginning to welcome individuals with different sexual and gender identities.
Another point of agreement was the role of spiritual communities within social change. Goldstein said religion should be built on a foundation of love putting people first. Gonzalez added religious leaders should take a stand on injustices they feel are occurring, regardless of how it makes them appear to a congregation.
Grant Hardy, a professor of history and religious studies, said he thinks a lot of the discord comes down to interpretation.
“They can draw the line at, ‘Oh you can be Christian, but you can’t ever act on homosexual impulses’, or even the impulses are wrong. That’s one side,” Hardy said. “But there are Christian denominations that look at the same Bible and interpret the same sorts of Scriptures differently and are welcoming to LGBT people. So it depends, and it comes down to probably a matter of Biblical interpretation.”
Hardy added transgender and nonbinary identities can have a place in religion, stating God as not necessarily gendered in the way many think.
“But once again, it depends on how you read the text. In fact, I think for a lot of Christians, and actually for some other religions as well, God himself is sort of beyond gender,” Hardy said. “I don’t think that makes God trans or anything, but it does mean gender is something that’s sort of in the human world. It’s not so much in the celestial realms.”
Justin Day, a senior drama student from Greensboro, said they also think God can exist outside of gender, allowing trans and non-binary identified individuals a place in religion.
“It depends on which religion you’re looking at specifically. The example everyone always refers to is Christianity. So Christianity, God made men and women in his image, meaning is God strictly male as we see male?” Day said. “Or is God somewhere in between or a combination of both or somewhere outside of that spectrum?”
Day, a Hellenistic polytheistic witch, said they feel religions exist purely to provide a moral code, but can include differing sexual and gender identities.
“It depends on the religion, and if you’re looking at things like, ‘God loves everybody’, then OK, God loves everybody,” Day said.
Logan said he felt the panel was connected with InterVarsitiy’s recent policy change and hopes they will see both sides and learn to adapt.
“I think this relates heavily to it. Like I mentioned, there’s a lot of people who are queer and religious and these numbers are growing as society shifts and more people feel comfortable expressing these two identities simultaneously,” Logan said. “This is something that we’re going to continue seeing, and whether or not the InterVarsity coalition, or their leadership and the higher-ups like it or not, this is something that’s going to happen. It’s something they can either recognize and adapt to or be left behind.”
Delete Image
Align Left
Align Center
Align Right
Align Left
Align Center
Delete Heading