From resident assistant to community director 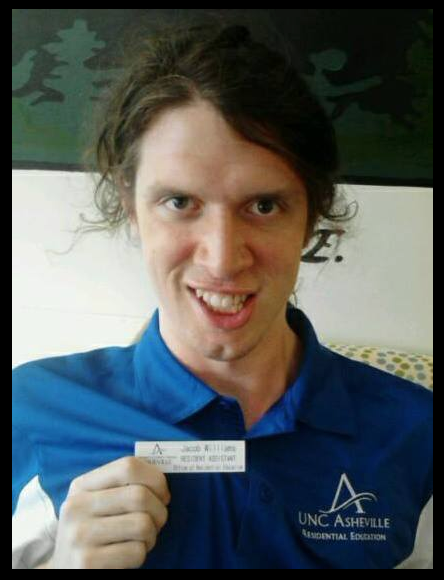 Catherine Pigg
A&F Staff Writer
[email protected]
Jacob Williams never expected to become the community director of the very residence hall he moved into his freshman year at UNC Asheville in 2011. He lived at Founders Residence Hall and later went on to become a resident assistant at Founders his junior and senior years at UNCA, until he graduated in 2015.
“It is a little surreal. I never imagined that I would be able to like work here again,” Williams said.
The new community director for Founders Residence Hall became inspired to apply to be a RA his sophomore year by his former RA from his freshman year.
“She was just a great RA and a great friend of ours so we just wanted to be like her. So that was why we both went out and applied, and we both got accepted into work that year. Then that brought me back to Founders, home sweet home,” Williams said.
During his first year as an RA, Williams was in charge of a half hall on the first floor of Founders.
“So I only had 10 residents, but that allowed me in my first year to have a really strong group of residents, friends and students. It was fun to watch them kind of grow very personally. So I really enjoyed that, I had a lot of really great coworkers that I was fortunate enough to work alongside with and learn with,” he said.
His second year as a RA, he had a full hall on the third floor of Founders Residence Hall and built a community for his residents to flourish in, according to the 23-year-old UNCA alumnus.
“But as an RA, I learned a lot about obviously like working with people in a very specific way just learning how to deal with lots of, whether it be emotions or family which you know we deal with as like regular human beings. In a way that is more so all about helping,” Williams said.
Being the CD at Founders Residence Hall is a combination of both a weird and a cool feeling, Williams said.
“When I moved out of here my senior year I said to myself, ‘Alright I will never live in Founders again, I’ll never live on UNCA’s campus again.’ I was, you know, I made those statements to myself and didn’t think I would have the opportunity to go back on them so it’s still kind of a weird dream,” he said. “It’s great, I love it. It’s cool to be doing this sort of work again at a place where I was able to learn and grow, you know UNCA and specifically Founders.”
The RA job offers the opportunity for individuals to grow as leaders, according to the Founders community director.
“I think it’s one of the greatest things the RA job can provide to anyone. Even if you are a natural born leader and you, you know, lead friend groups or whatever, if you lead clubs. You know you’re already doing that kind of stuff, but you know as an RA you’re kind of leading all the time,” Williams said.
RAs have a phrase, “You never take your RA hat off.” RAs live where they work and are not really able to clock out, Williams said.
“So I think it teaches you how to constantly be leading folks and it taught me a lot about myself through that process. I learned a lot about dealing with different people,” he said. “As an RA everything is fair game and your students, whatever they’re willing to share and communicate about, you know, you’re ready to like have conversations with them at any time.”
Williams believes his experience as a RA not only helped him grow as a leader, but prepared him for his current and future careers.
“I think that’s something that has been very applicable to the community director job because now my RAs, when they have questions it’s not always between the 9 to 5 hours and a lot of them are pretty simple questions to be able to respond to. I think the RA job prepared me for the always-working mentality,” Williams said.