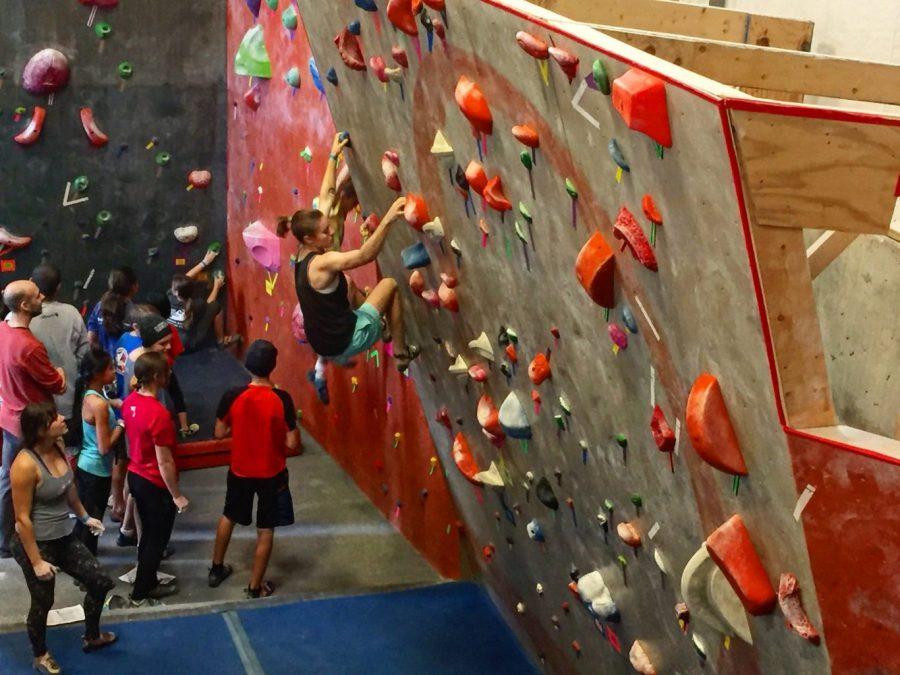 Sydney Stradling demonstrates her rock-climbing ability which runs in her family. Photo by Emily Shea.


Emily Shea
Contributor
[email protected]
Sweat drips down UNC Asheville student Sydney Stradling’s upper brow as she weaves in between crowds of competitors and clouds of chalk dust. After weeks of training she is ready to put her body to the test as she steps up to complete a difficult route at the Smoky Mountain Adventure Center’s 22nd Annual Fall Flash Climbing Fest on Nov. 5.
Four hours later, she brushes the chalk from her palms as she is handed two third-place ribbons — one for third-place among all intermediate-level competitors and the other for third-place among all adult females.
“I wanted to win, but I definitely wasn’t expecting to,” Stradling said. “I haven’t won anything in a climbing competition since high school.”
As a junior health and wellness promotion student, 20-year-old Stradling starting climbing six years ago, but had to balance training with a full course load, a part-time job at a local organic cafe and weekly volunteering at Park Ridge Hospital.
Stradling began climbing as a 14-year-old after tagging along with her little brother to the local climbing gym.
“One day I was climbing and one the coaches at the gym asked me to join the climbing team,” Stradling said. “I joined because someone expressed interest in me and thought I was good enough.”
Stradling grew up in Raleigh with her mom Leanne, her dad Richard and her younger brother Ben. Before becoming an avid climber, she was active in cross country, lacrosse and tennis.
Although Stradling was involved in predominately endurance sports before she began climbing, her mom said climbing allows her to set goals and push herself harder at a pace that suits her.
Her mother, now a fourth-grade teacher, said she used to climb throughout high school and college, exploring boulder fields in northern New Hampshire.
Although Stradling said she enjoys climbing outdoors, she focuses on bouldering indoors because it is more accessible.
Bouldering is a form of climbing without the use of ropes or harnesses. In an indoor gym it is typically climbing at heights of 10 to 16 feet with crash pads underneath or a spotter to catch you if you fall.
The Fall Flash Fest was a bouldering competition for all ages. This year there were over 100 competitors ranging from ages 10 to 50 and older.
Kevin Rohweder, the facility manager and assistant team coach at Smoky Mountain Adventure Center, said this particular competition was a red point style competition, which means climbers had a set amount of time to climb the five hardest boulders they could.
“Score is kept on individual score cards with other climbers and coaches signing off as witnesses on a climber’s successful ascent,” Rohweder said. “There are 65 boulder problems with Boulder 1 being easiest and 65 the hardest. Boulder problem 1 is worth 100 points, Boulder 2 is worth 200, Boulder 3 is worth 300, etc…”
To train for the competition Stradling said she went to the climbing gym at least two times a week to practice different routes on each boulder. She also has a hangboard above her bedroom door that allows her to train her upper body strength as well as the muscles in her hands and fingers used for gripping.
Although Stradling only competes once or twice a year, she climbs even when she is not training for a competition.
“I really like that it is a mental sport just as much as it is a physical sport,” Stradling said. “You really have to think differently about how to get from point A to point B, so it really challenges me.”
Stradling said she plans to keep climbing and hopes to continue competing in local bouldering
Delete Image
Align Left
Align Center
Align Right
Align Left
Align Center
Delete Heading