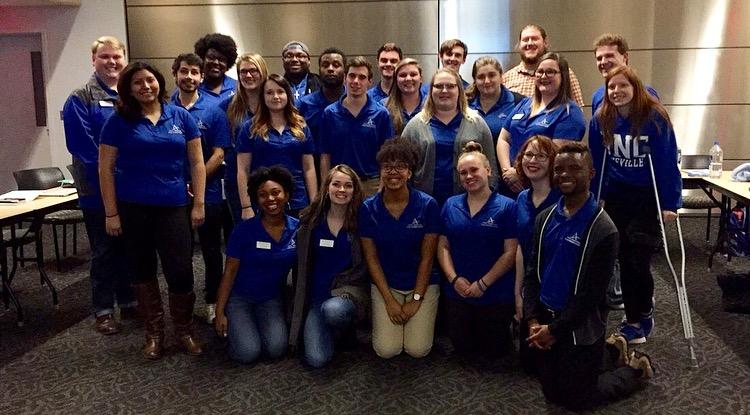 Maggie Haddock
News writer
[email protected]
During last week’s senate meeting, the Student Government Association discussed their recent meeting with the University of North Carolina Association of Student Governments, and their plans for moving forward after the executive order banning international travel impacted the campus community.
“We all know that Donald Trump signed a controversial executive order regarding travel over the past few days,” SGA President Charlie White said. “We as ASG made a statement opposing that for its effect on our university system and a statement of support for the students, faculty and staff across the system that are affected.”
White met with Shannon Earle, chief of staff, to discuss how this executive order will impact the UNC Asheville community. After thorough review, White and Earle announced no UNCA students, faculty or staff are directly affected by this order.
“On a broader level, a lot of the other campuses in the system have 80 to 100 students that are affected and it’s still unclear what the system and the campuses are going to do regarding this,” White said.
Larger campuses such as University of North Carolina Chapel Hill and North Carolina State University recently released statements explicitly condemning this order, and active discussions continue to take place within the system regarding the impact this order will have on individuals within the system considering international travel.
“It is not a negligible number of people that, out of the blue, have been impacted by this in our university community,” White said.
Madeline Finnegan, president of the ASG, spoke at the UNCASG meeting about the Board of Governors and their strategic plan for the UNC system. The discussion was guided by the student body presidents, according to White.
“We gave some feedback from all the different campuses on what we thought, and what she should say to the board when it comes to implementing what they come up with,” White said.
The discussion of how tuitions and fees operate on the campuses was also discussed in the session, according to White.
“We came up with the idea that in addition to sending along the spreadsheet, we might be interested in having some student comments sent along as well so board members can actually read that in addition to the numerical materials they are receiving,” White said.
The meeting at UNCASG proved to be beneficial for future events at UNCA, as a grant for mental health week was approved in full.
The staff found the event important and were excited to hear about UNCA’s idea to distribute holistic remedies such as sleep oils during the event, according to Senior Senator Jasmine Dorlan.
“They loved it and we also added a portion to the Friday of mental health week that’s going to focus on marginalized communities in mental illness,” Dorlan said.
Mental health awareness week will begin Feb. 27 and conclude March 3.
The National Alumni Council met with UNCA students in January and held a panel discussion regarding university advancement and student support.
“We had a really wonderful panel discussion with six or seven students,” White said. “They absolutely loved talking to the students that we have and they want to continue that conversation.”
SGA will continue to find a valuable way to connect students with alumni and continue that conversation.
“Laura Herndon over in alumni relations is looking to find a way to put together a program that systematizes students and alumni,” White said.
The 49th session adjourned with the plan for advancement of multiple outlets of the UNCA campus community as well as acknowledging the continuing efforts to resolve the effects of the travel ban.
“There are still some movements going on around the system level that we talked about this past weekend at ASG regarding what the system wanted to be advising folks on who might be impacted,” White said.