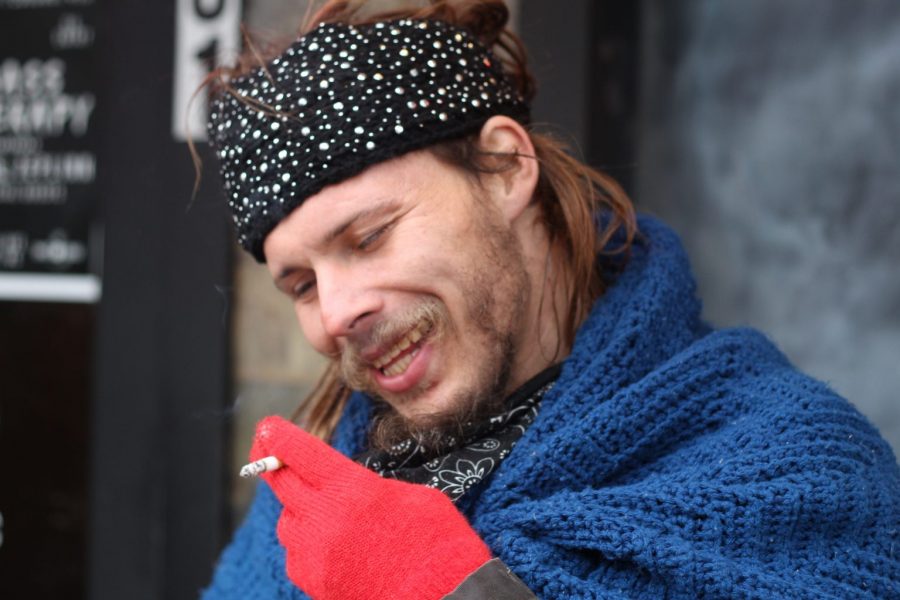 
How would you describe your style?
“I don’t know. I’ve been dressing this way for 40 or 50 years, you know? Pretty much and I don’t do a lot of clothes shopping, so I just — ”
Just wear what you have?
“Yeah and if you’d seen me, 50 years, well, I won’t say 50 years, 40 years ago, I’d probably have looked the same way. Thirty-something years ago, I still would have had the locks,     so I haven’t changed that much.”
Yeah, so would you say the locks are part of your identity?
“I guess so, yeah. I’ve had them since 1982.”
So if you were to describe one of the things you like about working in the mental health field, what would you say?
“When the light comes on in someone’s eyes. I work a lot with children now. The good thing about that is it’s easy to see results in the little ones and it’s so joyous. It’s not that I’m wanting to see results, but it’s the light. It’s the happiness, to see people’s suffering eased a little bit more, to see their anxiety, to see things working out. That’s the best part.”
That’s awesome, yeah, when it finally clicks with them.
“Yeah, when something lifts, something shifts, you know? There’s a change and both parent and child feel better.”
So if you were to describe what inspires you on a daily basis, what would you say?
“I don’t know. I guess life does. I’m jaded, even though it doesn’t seem like it. My children inspire me to keep going and they always have. They’re all adults at this point.”
Yeah, kids have the tendency to do that.
“Yeah, every generation, and my grandchildren, too.”
So, do you have a life motto that you live by day to day?
“No, sometimes I wake up spontaneously, do new things and being grateful but I don’t force myself to do that. I don’t think I have a life motto.”
Just live and let live.
“Yeah, just whatever works for that moment.”
So, what are on your thoughts on Asheville? What do you like about it and what do you dislike about it?
“Dislike first, it’s just gotten less friendly, more segregated in the 26 years I’ve been here, racially, economically, even though it was before a lot of people moving in and saying, ‘oh, this is great. This is cool.’ There were kids walking in Montford the other day and a police officer had an AR-15. These were 13, 14, 15-year-old children. That’s what I don’t like about Asheville, becoming like that. What I do like about it is that it’s still relatively small. The mountains are beautiful. There are a lot of people here who do want to see a positive change happen in the world and so, that’s what I do like about it.”
Brandon “Dawg” Teague, 29, comedian, originally from Rutherford County

How would you describe your style?
“Ghetto fabulous. It’s like a unique style.”
It is. It’s very distinctive and what would you say inspires you on a daily basis?
“I just like to make people laugh.”
Do you have any good jokes?
“I got a lot of good jokes. What do you want to hear?”
Anything.
“Clean, dirty or sick?”
Clean.
“I can’t do clean. That’s terrible.”
School newspaper dirty.
“OK, I got you. OK, there’s a fly, flying above the river and there’s a fish in the river saying ‘if that fly drops three inches, I’m gonna jump over and get that fly.’ There’s a bear on the side of the river. He said, ‘if that fly drops three inches, that fish is going to jump up and get that fly. I’m going to get that fish.’ So the hunter in the woods says, ‘if that fly drops three inches, there’s a fish that’s going to jump up to get the fly, the bear’s gonna get the fish and I’m going to shoot the bear.’ So there’s a mouse beside the bear that says, ‘if that fly drops three inches, that fish is going to jump up and get the fly and the bear’s going to eat the fish and the shooter’s going to shoot the bear and I’m going to get that sandwich that drops off his lap.’ So basically, there’s a cat that says, ‘if that fly drops three inches, I’m going to eat that mouse.’ So the fly drops three inches. The fish jumps up and gets the fly. The bear gets the fish. The shooter shoots the bear. The sandwich falls. The mouse gets the sandwich and the cat runs in but he didn’t take him out like the rest of them. He falls in the water. What’s the lesson learned here?”
I’m not sure.
“If the fly drops three inches, that pussy’s getting wet.”
Oh, OK. Very good. So if you were to describe one thing you like about Asheville and dislike about Asheville, what would you say?
“I like the people of Asheville but also along with it I don’t like the people who don’t care as much anymore. They don’t really care about their fellow men. There’s a lot of heartlessness in America these days really.”
What would you say exemplifies that? What would you say is the root of that?
“Selfishness, material possessions, an extravagant lifestyle, yuppies, young, uppity individuals that live extravagant lifestyles but don’t care about anyone else except themselves. It’s the new-age racism. I don’t like yuppies. I do not like how this city has some of the richest population in North Carolina today and they can’t help veterans that are on the street or the homeless people that have been here for 20 years. It’s the truth.”
That’s crazy.
“Yeah, it’s criminal. They really need to do an investigation into how racist people are. There are locals, people that have been here for all their lives, that are on the street. They do a good job. It’s a lot better than it used to be but in many ways it’s way worse than it’s ever been. With as many homeless as we have had that had more acceptance, now that there’s less, you hear people say, ‘hey, everybody else did it. Why can’t you?’”
So, if you were to describe a motto that you have on a day-to-day basis?
“Live, life, laugh.”