In an attempt to help his future career, UNCA student leaves family in Germany to study in U.S. 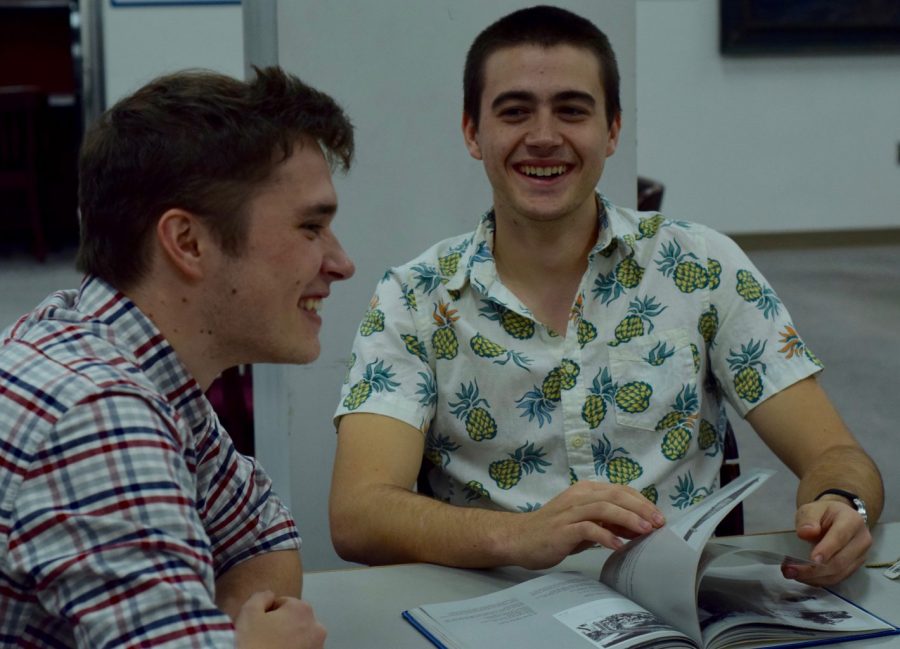 Kyle Jastram, a 21-year-old mechatronics student moved away from his family in Germany to continue his education studying in English. Although Jastram made this decision to help his future, the move from his close family proved to be difficult.


During dinner, his side of the table accumulated three plates of food and a cup of coffee, which he drinks black. The aspiring engineer pensively thought over the interview questions. He first replied with short, quick-witted answers, but soon opened up to give long, soulful responses.
“The last time I cried was when my grandmother died a couple of months ago,” Jastram said with a deep sigh and a downward gaze. “We were somewhat close. She was the closest of my extended family.”
Jastram majors in engineering through a joint program between North Carolina State University and UNC Asheville. He chose to move to the U.S. and leave his close-knit family in Europe to pursue an education with better chances of having a career.
“It’s just a close family relationship, especially because we’ve moved around a bit,” Jastram said. “They took the place of very close friends.”
Jastram and his family moved to Frankfurt, Germany for his father’s job when he was 7. His father worked as an engineer and chose to move his family to Germany where he had familial roots.
“Moving to Germany wasn’t necessarily a hard transition,” Jastram said. “I was 7, so German wasn’t hard to grasp. You don’t need to know a lot of words when you’re 7.”
Although his parents still live in Germany, Jastram remains close with his family.
“I’d say I am close with both of my parents,” Jastram said. “I’m a lot like my dad, but I’m more laid back.”
Jastram’s father still works as an engineer and Jastram had many internships with engineering companies during his teenage years.
“I’d say my dad impacted me in my decision to go into engineering,” Jastram said. “He did not pressure me to be an engineer. In fact, neither of my parents ever pressured me to go to university.”
Jastram could have easily stayed in Germany to pursue an education, but he desired an education in English to broaden his career choices.
“(English) is the superior language in every way,” Jastram said. “It’s the international language. People who speak English don’t realize what better of a position they are in. In other countries, it’s often a symbol of status if you can speak English really well.”
The 21-year-old seems to think and act out of pure logic. He articulates every action and every word thoughtfully. He watches everything going on around him. In between answers, he concentrates on balancing his chair on its two back legs, only once going too far backwards just a bit.
“It’s simple: I chose engineering because I like physics and I like math, and you can get a job easier with engineering than you can with a physics degree.”
Although studying engineering, Jastram revealed he has many talents, some of which may appear obscure. He took a gap year between high school and college to work several jobs, including a job harvesting olives in Seville, Spain.
“I found the job online. It was just a farm working opportunity. I got to learn Spanish,” Jastram said with a chuckle. “The other workers and I just traveled around Spain harvesting olives and making olive oil.”
Jastram is also the founder and president of UNC Asheville’s Club Soccer team. Until Feb. 4 in a game against Davidson College, the team remained undefeated since August.
“I didn’t want to play soccer six days a week like the men’s soccer team, so I started club soccer,” Jastram said.

Jastram stays close to few people, allowing only his family and his close friends into his personal life. Two of his closest friends, Patrick McGrady and Nathan Connor, said Jastram relies on his privacy and does not reveal too many details about his life to anyone, especially groups of friends.
“Normally when someone hangs out with Kyle, it’s not just one person and Kyle,” McGrady said. “Most times it’s three or four people with Kyle. It is always a group of friends.”
McGrady thought for a moment about his friend before continuing.
“I don’t think he wants to share too much. I think if he is one-on-one, he would talk a lot about deep stuff, and I don’t think he likes that,” McGrady said.
McGrady and his family moved to Austria when he was young. He wanted to go to school in the U.S. and decided to attend UNCA. He shares a similar history with Jastram, which helped them become friends, McGrady said.
“There’s definitely that connection I can just have with him and not with anybody here,” McGrady said. “It’s just something that we both grew up with and can relate to somehow.”
McGrady said he felt comfortable engaging with Jastram on a much more personal level because they shared more than just interests, they shared a cultural background.
“I was just looking for friends,” McGrady said. “It helps if you have something in common with somebody else, especially in another country. I thought we would become friends because we both spoke German.”
Although unable to share something such as McGrady’s cultural bond with Jastram,  22-year-old Connor also studies engineering, and the two became close through school.
“I would say the way he learns compliments the way I learn,” Connor said. “We usually have the same classes together, but each one is in it’s own respective branch, and one of us might be a little bit better in one department than the other.”
Connor leans back in his chair and speaks in awe of Jastram’s ability to stay calm in stressful situations, jokingly describing his collected demeanor as the perfect combination of empathy and nihilism.
“A lot of engineers get extremely stressed out with the workload we have to do, but he doesn’t really seem to stress at all about it.”
Connor shared a story about Jastram and both Connor and McGrady agreed it displayed his genuine self.
During spring break last year, Connor, McGrady and a few other friends planned a trip to St. Petersburg, Florida. Jastram did not show up until partway through the trip.
“The funniest thing he did was he got up at 4 a.m. to drive to Florida, a 10 hour drive going down to St. Petersburg. He stopped halfway through and he slept, just on the side of the road,” Connor said. “He got back up, managed to find where we were at, and tackled Patrick on the beach when he got there. Kyle comes out of nowhere at the most random time.”
Connor and McGrady stopped to laugh for a moment before continuing with the story.
“He brought his circuit board with him to the beach, too,” Connor said.
To Jastram’s closest friends, he remains an enigma. His care-free attitude paired with his stealthy persona makes him a human puzzle even his closest friends have yet to solve.
“I would definitely say he’s spontaneous,” Connor said. “Or he’s just so private that it appears he’s spontaneous. It’s one of those two.”