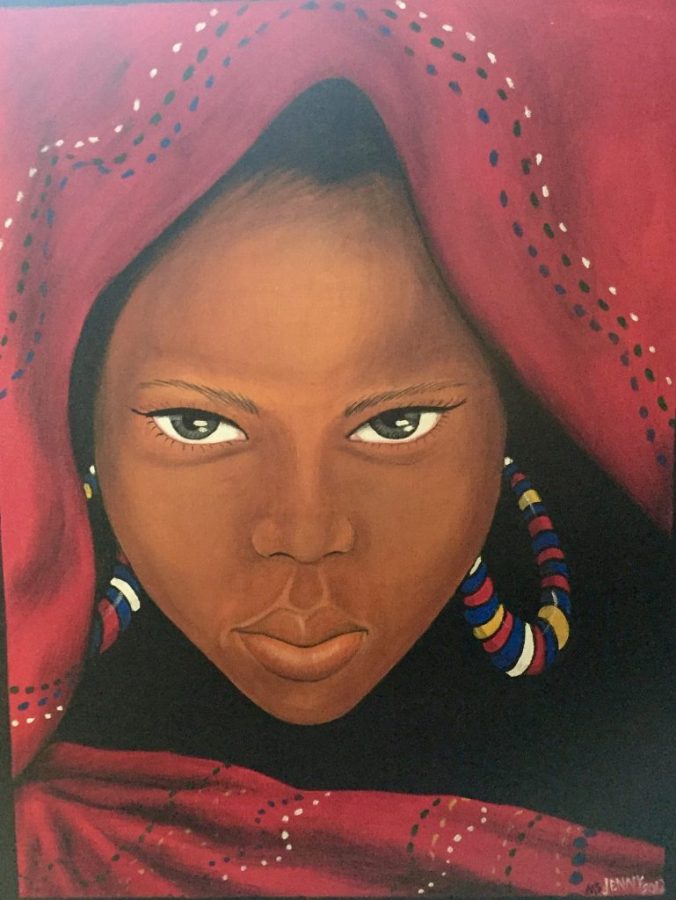 Sarah Shadburne
Arts & Features
[email protected]
The presence of strong women in Jenny Pickens’ life shaped the world around her and energized her artwork. Now, as part of Women’s History Month, the Asheville-based artist redefines pivotal strength in her new exhibition of paintings titled Perseverance.
“My grandmother was a strong woman,” Pickens said. “She was well up in her age and stepped in and took us all in.”
Growing up, both Pickens’ parents were in prison and she was the youngest of four children who would have soon been separated if not for her grandmother.
“I think about all the things she did for us,” Pickens said. “We didn’t go without food, we had a place to live, clothes and you know, she died before I could even thank her for that, but her being strong was something I experienced.”
Pickens primarily depicts women in her paintings with a special, lingering emphasis on their eyes.


“I think it’s because I didn’t know my mother when I was young,” Pickens said. “I haven’t seen her in 40 years. When I meet people I always try to look at them and see, ‘Is this her?’”
Her new exhibition Perseverance deals with women redefining what it means to be strong and persistent despite barriers to continue making an impact on the world. She said she cites her inspiration as being born directly from her experience as a single mother.
“When my kids were really young, we lived in a housing apartment and one day my son was outside and saw someone come through shooting and it scared him to death,” Pickens said. “He was afraid to leave the house. I told him, ‘We are getting up out of here, no matter what it takes.’’’
Pickens began her journey into art as a kindergartener with help from her supportive painting teacher, whose words and smile were always encouraging.
“I always painted a house with a flower beside it for some reason,” Pickens muses. “She always used to tell me, ‘You are such a good artist,’ and it made me think, ‘Yeah, maybe I do like this.’”
Pickens was the featured artist for Black History Month last year, so when she got the email to participate for Women’s History Month this year, she was ready.

Torre White, the 26-year-old daughter of Pickens is infused with the spirit of Perseverance, referencing times growing up when she pushed boundaries and asked questions when she and other women were excluded from things on the basis of their gender.
“Even in middle school, I loved football. Why can’t a woman play football? So I tried out,” White laughs. “Anything that is supposedly for men I feel like, why can’t a woman do it?”
White tried a variety of activities in high school, such as ROTC and founding an LGBT club with her friends, because she knew how it felt to be discriminated against over something you cannot change.
“I don’t believe that because I’m a woman I have to be defined as such. I can define myself. I don’t need society to define me,” White said.
White recently took her 7-year-old son to the Women’s March on Asheville, who toted a sign reading, “I stand with my mom.”
“Although he may not understand the complexity of it, he understands that when you stand together with a person despite what they look like, you can make changes,” White said. “That’s what I want to instill in my kids.”
White learned from the art of her mother as a child and continues to take those lessons with her as an adult with a career.
“It’s not always what a book and a school can teach you, but what you allow yourself to learn and discover,” White said.
Perseverance will be on display in the Intercultural Center in Highsmith Union weekdays from 8 a.m. to 5 p.m. until the closing reception on March 28.
Delete Image
Align Left
Align Center
Align Right
Align Left
Align Center
Delete Heading